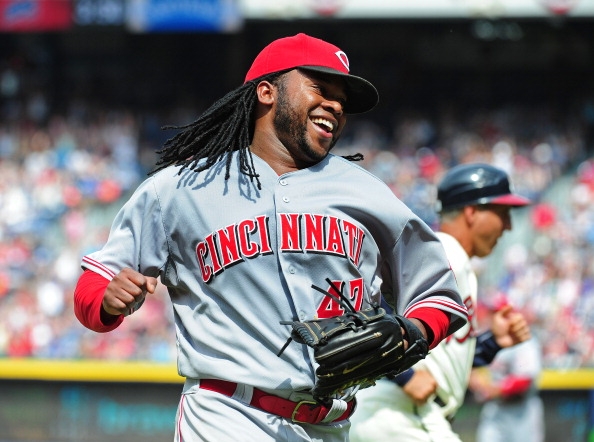 Johnny Cueto was traded to the Kansas City Royals / Photo courtesy of latinpost.com

The MLB trade deadline is coming up on the last day in July and it’s time to look at some of the trades which have already happened as well as some which I think will occur in the next 48 hours.

The biggest trade that has been completed so far sent starting pitcher Johnny Cueto from the Cincinnati Reds to the Kansas City Royals for three very good pitching prospects. Cueto is a rental player who will be too expensive for Kansas City to keep at the end of the season, but the Royals have the potential to go back to the World Series again this year, so they knew it was their time to make a splash at the trade deadline for arguably the best pitcher available.

Other trades of note include starting pitcher Scott Kazmir going from the Oakland Athletics to the Houston Astros, who are still surprising many critics who did not believe this young team would be ready to compete for a couple more years.  Outfielder Shane Victorino is now an Angel, reliever Tyler Clippard a Met, and Jose Reyes is a Rockie.

With two wildcard spots in each league, there are so many more teams in the hunt for a playoff spot, making it harder for teams to call themselves sellers. The Cubs, Mets, Giants, and Pirates are all contenders in the National League, and it will be entertaining to see which of these teams makes the biggest move to try and win a place in the wildcard game. Expect the Chicago Cubs to do something big this week, working a trade for either David Price or Cole Hamels, the two top remaining starters on the market.

In the American League, the Toronto Blue Jays need pitching in order to give themselves a chance at a playoff spot, something they haven’t achieved since they won consecutive World Series titles in 1992-1993. This team has the best offense in baseball, but the eighth worst pitching staff. After picking up Troy Tulowitzki from Colorado, look for Toronto to pick up the White Sox’ ace Jeff Samardzija to bolster its pitching staff.

Looking at the rest of the AL, the Minnesota Twins have to make a trade if they want to have a chance at making the playoffs. This team is a head-scratcher and I’m surprised they are in the position they are in, but if they don’t trade for a bat like the Padres’ Justin Upton, the Twins will fall out of the playoff race soon.

With not many hours left, hopefully your favorite team’s general manager doesn’t doze off and miss the opportunity to get your team to the promise land.