The Daily Nexus
Sports
USMNT on the Rise After Winning Group A
July 15, 2015 at 1:30 am by Elliot Thornton 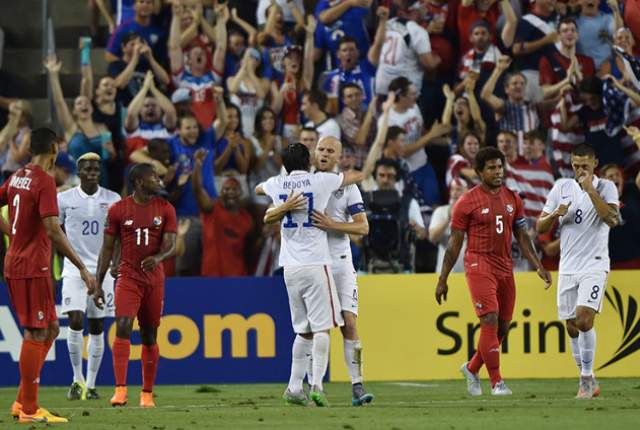 The US Men’s National Team clinched first place in Group A of the 2015 CONCACAF Gold Cup with a 1-0 victory against Haiti last Friday. The atmosphere was loud, the fans were reckless, and one goal scored by team captain Clint Dempsey proved to be enough for team USA to pull off the emotional win.

The stars and stripes have been on a roll on the pitch of late, including the women’s national team which conquered rival opponent Japan in an epic 5-2 outcome for the 2015 FIFA World Cup. After a stomach-aching defeat to Japan in the last World Cup, this hungry female squad was ready for the challenge and left no doubt on the field in taking the cup for the first time since 1999.

The women’s dream has finally been fulfilled, but the dream of the men’s national team is still in the making. Will they be able to rise to the occasion and make a run for the next world cup?

After a disappointing loss to Belgium in the round of 16, Head Coach Jurgen Klinsmann and his team are focused for the upcoming opportunity. Although a young team lacking veteran leadership following the retirement of Landon Donovan, new faces and talent will step in place as they start their journey to Russia.

Among these players lies the 23-year old striker Gyasi Zardes. The LA Galaxy forward subbed in the second half for Team USA and within 61-seconds assisted captain Clint Dempsey for the only goal scored in the game. Turns out the bright lights and big stage wasn’t too much for the young soccer player as he shined in the spotlight and continued to be in attack mode for the rest of the night.

Dempsey was impressed by Zardes’ play, calling the forward a “dynamic” player that “will play a big part in the national team picture moving forward.”

Other players on the rise include midfielder Alejandro Bedoya and goalkeeper Brad Guzan. The duo have been two critical components of Team USA’s success, specifically Bedoya’s play during the World Cup in Brazil and Guzan’s time in the Gold Cup since replacing fan favorite Tim Howard.

Bedoya’s poise with the ball on the offensive end has been phenomenal. The New Jersey native put perfect placement on the ball for captain Michael Bradley to lock things up in a 1-1 stalemate against Panama on Tuesday. After learning so much in Brazil, Bedoya has stepped up to the plate and become a leader during Team USA’s summer run.

Guzan has made an impact from the get go since replacing long-time goalie Tim Howard. In the five games that he’s started, the 30-year old has hosted a goal difference of +8, only conceding a total of five goals. Guzan also had seven saves in USA’s victory against Panama Tuesday night.

Moving forward, it is the combined efforts of role players like Zardes, Bedoya, and Guzan that make the difference and will be the X-factor in giving Team USA a run in 2018. This roster isn’t centered around one major star like a Ronaldo or Messi but consists of a melting pot of role players that can impact the game with full force. If they work together as a unit this team may follow in the footsteps of the great US women’s national team.

This is a new era for American soccer. After crucial years of tough losses and decisive heartbreakers, the time has come for the US to prove to others that it can be champions on the pitch. Now that the women’s team has done its part, it is up to the men to carry the torch.