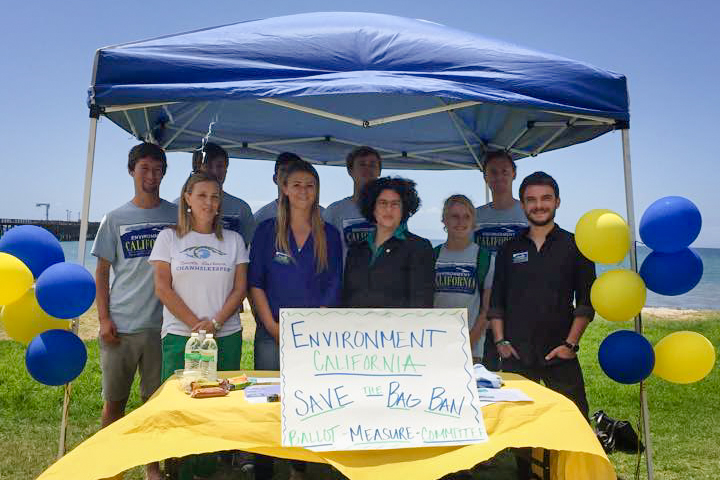 Environmental advocacy groups and Santa Barbara city officials hosted a conference at Goleta County Beach Park Thursday afternoon to announce the “Save the Bag Ban” campaign in an effort to maintain the ban of plastic grocery bags in California.

Senate Bill 270 was approved by Governor Brown in last September and took effect on July 1, creating a statewide ban on businesses giving out single-use plastic bags. Plastic bag industries have since campaigned and raised over three million dollars to delay the bill’s implementation pending the outcome of the California Plastic Bag Ban Referendum in November 2016. Environment California, an environmental advocacy group, has begun a statewide campaigning to encourage people to vote in favor of Save the Bag Ban in November.

“We are marking what should have been the last week for plastic grocery bags in California by urging shoppers, businesses and local governments to take action to eliminate polluting plastic despite the industry’s finest efforts to delay the law,” Goold said.

According to Goold, Environment California launched its bag ban effort the day after the intended start date for California’s statewide ban.

Goold also said 90 percent of ocean debris is plastic material responsible for the thousands of deaths in marine life every year. In California, 138 communities have implemented local plastic bag bans which cut the total amount of plastic bags used by the state by six million per year, according to Goold.

“What we use for only a few minutes will pollute our oceans for hundreds of years,” Goold said. “It’s time to ban the use of plastic bags in California.”

Santa Barbara Mayor Helene Schneider said it is unfortunate Thursday’s conference was held in light of the referendum to continue “fighting” the ban of single-use plastic bags instead of celebrating the implementation of the ban.

“Santa Barbara is once again suffering through another tragic environmental nightmare,” Schneider said. “The least we can do is work to make sure no more plastic bags end up getting into our oceans.”

Schneider said Santa Barbara created its own single-use plastic bag ban 18 months ago and it was estimated 47 million bags are used per year in the city.

“Just think about what is happening statewide,” Schneider said. “Think of the impact that the number of these bags have throughout the state.”

According to Schneider, the vote to ban plastic bags in Santa Barbara was essentially unanimous.

“Santa Barbara is a leader in that aspect,” Schneider said, “and that is through many years of perseverance and leadership, in a way working with the community creating something that makes a lot of sense and protects our environment and marine life.”

Kira Redmond, executive director of Santa Barbara Channelkeeper, a nonprofit organization working to protect the channel and its watersheds, said she hopes voters will understand the impact plastic bags have on the environment.

“It’s not a difficult thing to do,” Redmond said. “It makes a difference for the environment and we really hope voters say ‘No’ to overturn the ban.”

Here is an alternative to plastic bags for folks: https://www.youtube.com/watch?v=-oytifi7pPg
Use the code BagBan10 during checkout and save 10%.