The Daily Nexus
Sports Blogs
The Lakers Brand Is Not Dead
July 3, 2015 at 11:30 am by Michael Jorgenson 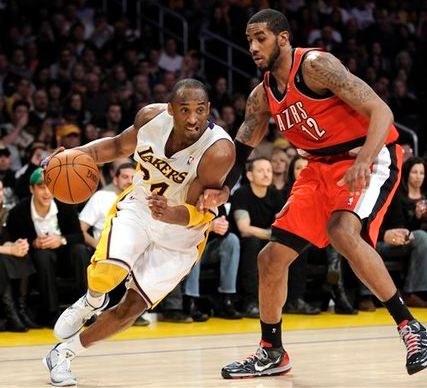 There has been a lot of talk about how badly the NBA’s most storied franchise has embarrassed itself over the past week.

After all the excitement and hype over the Los Angeles Lakers potentially winning this year’s prized free agent target in power forward Lamarcus Aldridge, their initial meeting with the 29-year old All-Star didn’t go particularly well. In fact, the backlash from that meeting was so awful that Aldridge and the Lakers participated in a second “miraculous” meeting yesterday, which has been speculated to be more of a relationship-mending 90 minutes between the Lakers and Aldridge’s management than a true second chance at landing him.

So things aren’t looking too great for the Lakers right now. Ever since David Stern’s infamous (and much maligned) veto of a trade that would have sent Chris Paul to the Lakers, pretty much nothing has gone right.

Dwight Howard leaves for the Rockets, Carmelo Anthony stays in New York, and Aldridge pretty much ruins the franchise in the media. Even DeAndre Jordan got a shot in when the organization was already feeling down. All the while, the past two seasons have literally seen the worst play in the franchise’s history.

Much of the blame has landed on management. Since Jim Buss took over as the team’s lead decision maker, the Lakers have been on a downward spiral.

For those who need a refresher, here’s the top of that downward spiral in a nutshell: with a starting lineup that includes four potential hall of famers, Buss has a choice between, A. a coach that has never reached the NBA finals, or B. a coach with more championship rings than fingers. Who do you pick? The answer is very simple: NOT Mike D’Antoni.

Oh well, the past is the past. What about more current issues?

Both the media and even the most devoted portions of the Lakers fan base have blamed superstar Kobe Bryant for much of the franchise’s downfall as well. After rupturing his Achilles in 2013, Bryant famously signed a 2-year, $48.5 million extension with the team – a contract which has been seen more as a “lifetime achievement award” than an accurate estimation of his current value on the court.

Of course at the ripe old age of 36, no one expected Kobe to keep on turning back the clock forever. So yes, this was a way for the Lakers to say “thank you for all your years of dedicated service.” It also saved them from having to endure the inevitable backlash from pissing off an aging “Mamba” for not treating him with the respect he feels he deserves. “Keep Kobe happy,” that has been the goal since way back in 2004 when the Lakers shipped Shaquille O’neal off to Miami.

The issue with this contract extension, though, has been the salary cap consequences. Not only were the Lakers handcuffed to an increasingly less effective Kobe, whose alpha dog mentality refuses to give any potential free agents a shot at running the team, but they also couldn’t sign many other stars – the very thing that has allowed the franchise to stay at the top so consistently.

So all those people who predicted that this contract would ruin the team may be correct. But, was this the wrong move by the Lakers? Call me crazy, but as someone who has watched this organization very closely over the past 17 years, I would argue no. Not at all.

There’s something special about the purple and gold. Something that makes them seem almost unreal when comparing them to another franchise.

The Lakers have always been innovators, from their commentators (Chick Hearn invented phrases like “slam dunk” and “air ball”) to their ownership (Jerry Buss revolutionized both courtside seating and cheerleading). They reside in Hollywood, meaning players will see famous faces at every game and maybe even star in movies with them. And yes, they have a winning tradition, with the most wins of any team in NBA history.

The word “tradition” tends to stand out in a conversation about the Lakers. Few other teams in the league have a tradition worth bragging so much about. And if their past success has shown us one thing, it is this: no matter what other organizations, the media, or players have to say about them, they will continue to do things their way.

Maybe Lamarcus Aldridge didn’t like that the Lakers preached too much about their tradition and past success. Maybe Dwight Howard was too scared of the lights. Oh well, the Lakers will find someone else who can fit the mold. This is a franchise that values its winning tradition above all else, and if a player can’t handle that, then they can move on.

Just like Kobe, the Lakers are an old dog. A “handcuffing” of a $48.5 million contract to an aging, injury-riddled superstar may be unheard of in this day and age of salary cap restrictions and rising small market teams. But just as they have done in the past, the Lakers decided it was more important to “take care of their own,” (just pretend Pau Gasol never happened).

The Lakers refuse to live up to anyone’s standards other than their own. Who cares what Mark Cuban or Dan Gilbert or ESPN says about them? They have 16 championship trophies that can do all the talking they need. Other organizations love to feed off of the Lakers’ perceived failures to make themselves feel better, and the media feeds off of them as well, making those failures seem much worse than they are.

But it’s not like this is the first time the Lakers have gone through a prolonged stretch of poor play, and it certainly won’t be the last. Kobe’s current contract and the team’s subsequent poor play teaches us that, even if Jim Buss does in fact step down in a few years, the Lakers organization will continue to play by its own rules. That’s how it got to the top, and that’s how it has stayed at the top.

A few bad years means nothing to the Lakers. Maybe all they really do need is for Kobe to retire so that a new superstar can help them rise from the ashes. But I guarantee, somewhere out there is a superstar who will recognize the Lakers tradition for what it is and embrace it rather than run from it.

Kobe Bryant could have left back in 2007, but he showed dedication and patience and was eventually rewarded with two more rings. In the end, his dedication and relationship with the Lakers was symbolized by a two-year, $48.5 million contract. You can’t tell me there isn’t someone out there who wouldn’t want to play for an organization that doesn’t only win at the highest level consistently, but rewards you tenfold in the process, whether it be by immortalizing your place in history or with a huge contract.

And, oh yeah, for all you students of the salary cap out there, there’s this, which just happens to coincide with the end of Kobe’s contract. The Lakers will have more than enough money and allure come next offseason, along with young assets in Jordan Clarkson, Julius Randle, and recent No. 2 overall draft pick D’Angelo Russell. If you haven’t figured it out yet, management knows what it’s doing.

Whatever happens in Kobe’s final games, Lakerland should just enjoy it while it can. There will never be another “Mamba.”

Five rings later, and hilariously, neither Kobe Bryant, AKA the “franchise killer,” nor general manager Mitch Kupchak can get the respect they deserve.

But after Kobe retires? I’m betting that history repeats itself yet again.

Sports editor Michael Jorgenson doesn’t write articles about the Lakers often, but when he does, he does it to save lives. The lives of Laker fans, not any other team’s fans.

Adapt or die. Tradition isn’t about your trophies it’s about your continued desire to do what it takes to win as a team. Hiring the right coach and making tough decisions. Lakers have adopted the wrong lessons from their own history. Spurs learned this lesson from the Rockets and are now teaching the league. No one is afraid of the Lakers tradition. They just know that right now it is dead. You are not getting Durant or any other big star next year. Lakers need to rebuild like Sixers and then….Oh wait that’s right, they have your pick. Lakers lack… Read more »

Finally an article with Perspecive. Once again, the media is making a killing by peddling what we are told is meat from the flanks of the fallen giant. That great stomping beast of purple and gold, who rises once every decade or so, to lay waste to the little people and their huts of grass. Oh see them dance and strut, one hand holding a flank burger, the other a brew. “Now,” they chant, “we are safe to play amongst ourselves! Our ‘Teams’ will triumph over the Star of tinseltown. Listen to their speeches and tales of heroism against overwhelming… Read more »