The Daily Nexus
Fine Arts
We Remember Them: Honoring the Unlucky Bright Minds of Our Youth
June 30, 2015 at 10:23 am by Alec Hartnett 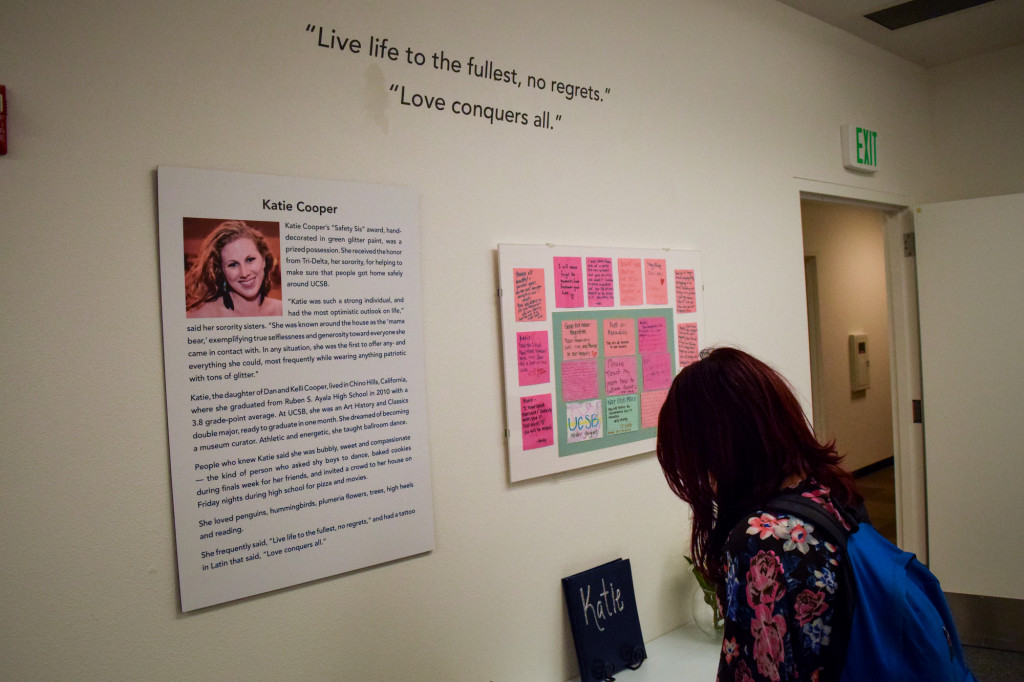 On a terrible May 23rd, in 2014, the UCSB and the Santa Barbara communities suffered greatly at the hands of contorted misfortune. Six students bore the brunt of this onslaught: Katie Cooper, George Chen, Veronika Weiss, Cheng Yuan “James” Hong, Weihan “David” Wang and Christopher Ross Michaels-Martinez. A year later, members of the community have successfully attempted to bring positivity to an injured UCSB. “We Remember Them,” a phrase that now holds immense signifigance for those connected to the university, is catalyzing the movement.

Now, with the help of curator Melissa Barthelemy, a Ph.D student in Public History, a new art exhibit titled “We Remember Them: Acts of Love and Compassion in Isla Vista” has been installed. The exhibition stands on campus in the Red Barn (Old Gym) to commemorate the students and will run until June 20th. It is open Wednesday through Saturday from 3-7 PM and on the 13th-14th from 1-5 PM.

In an effort to communicate a restorative and positive mentality, Barthelemy has been striving to introduce art into the campus community to enact a positive change. The Memorial Wall in front of the Arbor was one of her preliminary projects and now she managed a student run effort to give back to the UCSB student body.

Upon entering the barn, one is immediately consumed by a feeling of almost tangible respect and tranquility. The quiet peace that descends strikes harder than a blaring amplifier. The exhibit is designed in a way that carries the audience through a direct path of enlightenment to understanding and familiarity to resolve. It is initiated by the public perspective, with a Santa Barbara Independent spread and a placard informing visitors of the occurrence. The rest of the show adheres chronologically to the aftermath of the calamity.

The following room brings the victims close to those visiting in a very personal way. Creating individual spaces, pictures of each student and a short accompanying biography facilitate this. In addition, personal affects and artwork fulfill past moments of each personality. The following rooms are committed to highlighting the many movements and events that students and family have established in order to honor the afflicted.

Many memorials have sprung up in the past year, and very spontaneously, indicating the importance placed on this ordeal. A paddle out was organized and captivated. Seemingly hundreds of people formed a large ring upon the tides to take a moment to remember. The father of Chris Martinez, Richard Martinez, has pushed the need for greater and more effective gun-control laws on a national and political scale. One entire room informs museum-goers of this battle. Pressuring those in gorvernment to take firm action, Martinez has dedicated himself to trying to make sure that other parents do not lose their children to a national lax attitude towards arms.

Towards the end of the journey, visitors have the opportunity to reflect. There is a room where one can write a note about a favorite anecdote of UCSB or Isla Vista and pin it to a bulletin board. Next to these positive messages, the A.S. Pardall Center Memorial Boards line an entire wall, filling the tiny hallway with personal messages and bitter-sweet reminiscence.

The final enclosure is titled the “Reflection Room” where people can experience a real college-style lounge that promotes and strengthens a sound consciousness. Couches and chairs commandeered from the streets of Isla Vista are scattered smoothly throughout the room with lava lamps and Christmas lights peppered throughout. There is a table with a small arts and crafts set up and another with chairs surrounding it to suggest a sharing space.

In another effort to familiarize the community internally, Life Chronicles, a UCSB instituted non-profit organization, is recording anecdotes of each victicm to compile into a video for the stricken families. Initially instated to help children cope with their dying parents, Life Chronicles tapes sick parents speaking to their children about the life they shared. Now, with the assistance of Abby Mortimer, friends and acquaintances have the opportunity to share experiences they had with the victims so that the families can experience their lost ones a little more. It helps to “put the viewer in touch with the victim,” and allows for an easier healing process.

We remember them, and this reporter writes to all of us who have shared this experience. Let us all celebrate and keep alive a strong memory of the happiness and positivity made tangible in Katie, Chris, Cheng (James), Veronika, Weihan (David) and George; generated by a strong Isla Vista community.