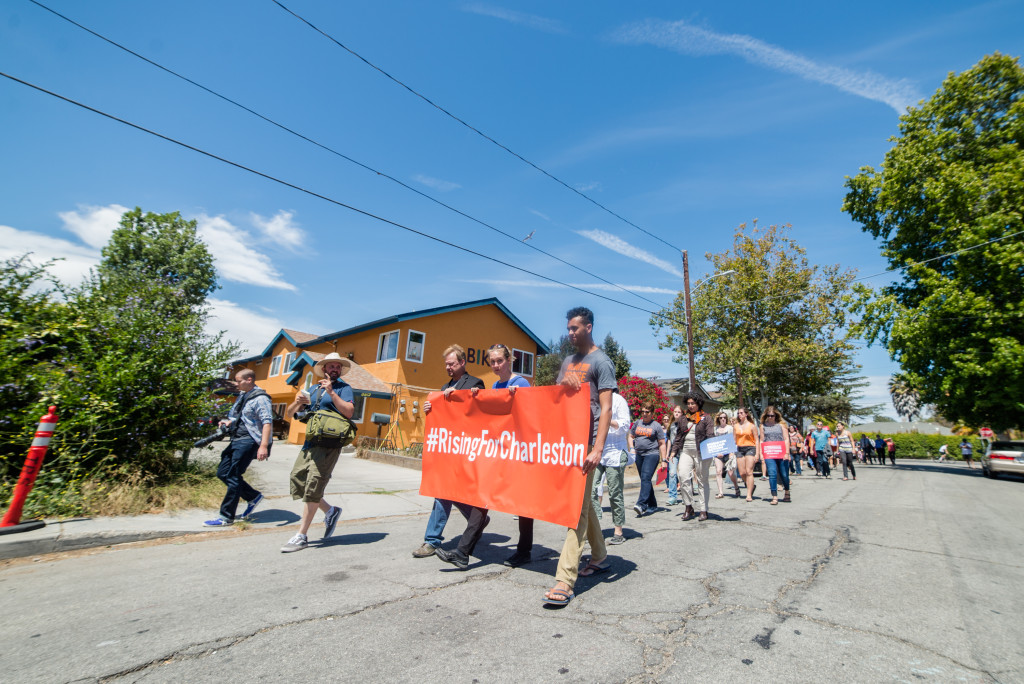 Gun-regulation activist group Moms Demand Action for Gun Sense in America and the University United Methodist Church co-hosted a walk and special service Sunday afternoon to honor the victims of the Charleston Shooting and to advocate for reduced gun violence.

Participants gathered at People’s Park in Isla Vista to listen to guest speakers before walking down Sueno Road to the University United Methodist Church. A candlelight vigil was held at the church with speakers and live music in remembrance of the nine lives lost in the Charleston Shooting on June 17 and the six lives lost in I.V. in the events of May 23 last year. Guest speakers included state legislators, city officials and the parents of May 23 victims Christopher Michaels-Martinez and Veronika Weiss.

“Today we accept that gun violence can happen at any time, any place and to anyone in America,” Martinez said. “It happened to my family and it can happen to yours. I am here today for my son, Christopher, who was shot and killed near here just over a year ago.”

Moms Demand Action for Gun Sense in America Team Leader Emily Heckman said the purpose of the Sunday’s event was to “lift each other up.”

“We want to pray together for the safety of our children, for the sorrows and deep compassion for our community and for the wisdom and courage of our elected officials to take the next action,” Heckman said.

“We’ve seen tragedy unfold again and again,” Schneider said. “The second amendment and common sense legislation that would have prevented a lot of these tragedies by stopping mentally ill and convicted criminals from accessing firearms are not mutually exclusive.”

“This was decades ago,” Jackson said. “I am very old, and this problem is not getting better.”

According to Jackson, acts of violence related to firearm use can be avoided.

“We talk about mental illness, we talk about hate,” Jackson said. “These are things that live in all societies. But they don’t get to demonstrate themselves the way they do in our country because not everybody has access to a firearm just because they want one.”

According to Assemblymember Das Williams, gun violence is one of the biggest causes of death among young people in America, behind car accidents and overdoses.

“We need to, more than anything, keep ourselves and our society from complacency,” Williams said. “If we really want to keep our youth safe, we need to tackle the issues of gun violence.”

Martinez said opponents to increased gun regulation told him background checks did not save his son.

“Does that mean background checks are a failure and not worth doing? No,” Martinez said. “Seat belts in cars don’t prevent death from accidents 100 percent of the time, but that doesn’t mean we should stop using them. Seat belts save a significant number of lives … We need to improve California’s background check system to prevent the seriously mentally ill from having guns.”

“The most important thing society can do to reduce gun violence is to require a criminal background check on firearm sale,” Schneider said.

According to Martinez, individuals in opposition to gun regulation question why knives are not being focused on because three of the victims of the events of May 23 last year died of knife injuries. Martinez said a gun has “vastly” more power than any knife.

“The handgun that killed Veronika Weiss could fire more than 40 bullets in one minute” Martinez said. “At the time the Isla Vista shooter died, he had more than 500 bullets left and his gun could fire as fast as he could pull the trigger.”

Williams said he co-authored Assembly Bill (AB) 1014 with Assemblymember Nancy Skinner to allow for a Gun Violence Restraining Order (GVRO) to be signed by a judge to temporarily prohibit a person from owning, purchasing or possessing firearms if the individual has been proven by law enforcement or a loved one to being a danger to themselves or others.

“Obviously, we shouldn’t be having mentally unstable people having possession of firearms,” Williams said. “Laura’s law is a powerful tool about incorporating mental illness, and I’m pleased that Santa Barbara is looking into it.”

Jackson said she authored Senate Bill 347 which adds dealing in firearms without a license, petty theft involving a firearm, selling ammunition to someone under 21 and bringing or carrying ammunition onto school grounds to the existing list of misdemeanors prohibiting individuals from being able to purchase or possess a firearm for 10 years.

“A number of crimes are associated with firearm-related misdemeanors,” Jackson said. “We know these people are more likely to use firearms and we know that we need to take those guns away from them moving forward.”

Schneider said even though 94 percent of American citizens are in support of gun regulation, special interests groups such as the National Rifle Association (NRA) are still a big obstacle to passing gun control legislation.

“A large part of the problem is on the national level where special interests groups block any debate to keep politicians bound to some sense of ideological purity,” Schneider said. “When that happens our citizens are not served.”

Jackson said she believes the Charleston Shooting was clearly an act of hatred.

“It is flamed by groups who unapologetically feel that they are the only ones who have truth and justice by their side,” Jackson said. “And we know they are wrong, and they should not be able to determine the fates of other people.”

Bob Weiss, father of Veronika Weiss, said people try to find understanding and peace in a society that is “embedded” with racism, heterosexism and other forms of discrimination and hatred.

“We have a repulsion to these acts of violence to motivate us to plants seeds of reason, love and peace in a world sorely in need,” Weiss said. “May we nurture them will intelligence, kindness and understanding.”

Martinez said while there will always be disturbed and angry people, society can prevent these individuals from having easy access to powerful weapons through sensible gun policies.

“We have allowed this to happen in our country, it doesn’t have to be this way,” Martinez said. “There is a way to have sensible, responsible gun ownership to keep weapons out of the hands of dangerous people. We can save lives.”