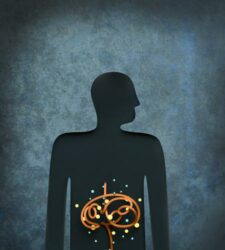 Gut microbes are responsible for making dietary constituents bioavailable and regulating metabolites in the body that are relevant to health and disease.

There has been increasing interest in the role gut bacteria have on our health, affecting areas as diverse as allergies, digestion and metabolism. A new study from Caltech shows that this list can be extended to brain function, discovering a spore-forming member of the gut microbiota that regulates serotonin biosynthesis.

In humans, serotonin, a neurotransmitter, is responsible for controlling the physiology of mood, sleep, appetite and gastrointestinal function. Oddly enough, 90 percent of the human body’s serotonin stores are located in the enterochromaffin cells lining the gut. Enterochromaffin cells function as neuroendocrine cells, releasing hormones when prompted by signals derived from nerve cells.

The Caltech study, entitled “Indigenous Bacteria from the Gut Microbiota Regulate Host Serotonin Biosynthesis,” explored the idea that gut microbes could modulate neurotransmitter production, possibly allowing communication between gut microbiota and the nervous system. The results were published in the April 9th edition of Cell.

According to Dr. Elaine Hsiao, Research Assistant Professor in Biology and Biological Engineering at Caltech and senior author of the study, her research builds on the concept of the brain-bacteria link, capitalizing on the correlation found between gut-microbes and serotonin availability in mice.

“Previous research from other laboratories demonstrated that mice raised in the absence of normal microbes (germ-free) have dramatically deficient levels of blood serotonin. We extended this by identifying particular subsets of bacteria that sufficiently correct this serotonin deficiency. The finding that gut serotonin is modulated by certain subsets of bacterial species, and not others, is interesting and somewhat surprising,” Hsiao said.

Jessica Yano, a post-graduate research technician in the Hsiao lab and leading author of the paper, summarized prior research that reveled aberrations of brain function in germ-free mice.

“Germ-free mice kept under sterile conditions and lacking the normal complement of microbes have been reported to display abnormalities such as an exaggerated stress response and decreased social behavior,” Yano said. “Studies have also revealed that alterations of the gut microbiome correlate to alterations of gene expression in the brain, but there is still a lot we don’t know regarding how microbes might be contributing to this effect and which particular species of bugs might be involved in which aspects of brain function and behavior.”

Using gnotobiotic mice, whose guts are colonized with a specific type of microbe, the research team was able to identify a bacterial subset that affected serotonin production, narrowing it down to a family of “spore-forming bacteria,” Hsiao said.

“We found that a particular consortium of microbes, which we call ‘spore-forming bacteria,’ sufficiently corrected peripheral serotonin deficiencies in germ-free mice,” she said. “We found that this occurred primarily through a host-microbe interaction, where these spore-forming bacteria promote serotonin levels in host enterochromaffin cells, a gut endocrine cell subtype.”

According to Yano, the serotonin synthesized by these host-microbe interactions have systemic effects in mice, influencing smooth muscle movement in the gastrointestinal tract, platelet function, as well as having possible effects on the nervous system.

“We are currently investigating whether bacterial modulation of serotonin also affects brain and behavior,” Yano said. “Identifying the particular bacterial species involved, along with the detailed mechanisms by which these bacteria regulate serotonin levels, will raise the interesting possibility of using bacteria or bacterial products to influence important functions, like gastrointestinal motility, hemostasis and potentially behavior.”

This research should have relevance in humans, explains Yano, as the findings were reproduced using spore-forming bacteria from humans, put into mice.

“We actually did some experiments with spore-forming bacteria isolated from humans and tested their ability to affect serotonin production in our mice. What we saw was that the human-derived spore formers were indeed able to increase serotonin levels in mice, so we are cautiously optimistic that our findings may translate to an understanding of a microbial role in human serotonin production,” Yano said.