The Daily Nexus
Regents
Undergrad Avi Oved To Be Student Regent July 1
June 4, 2015 at 5:04 am by Megan Mineiro 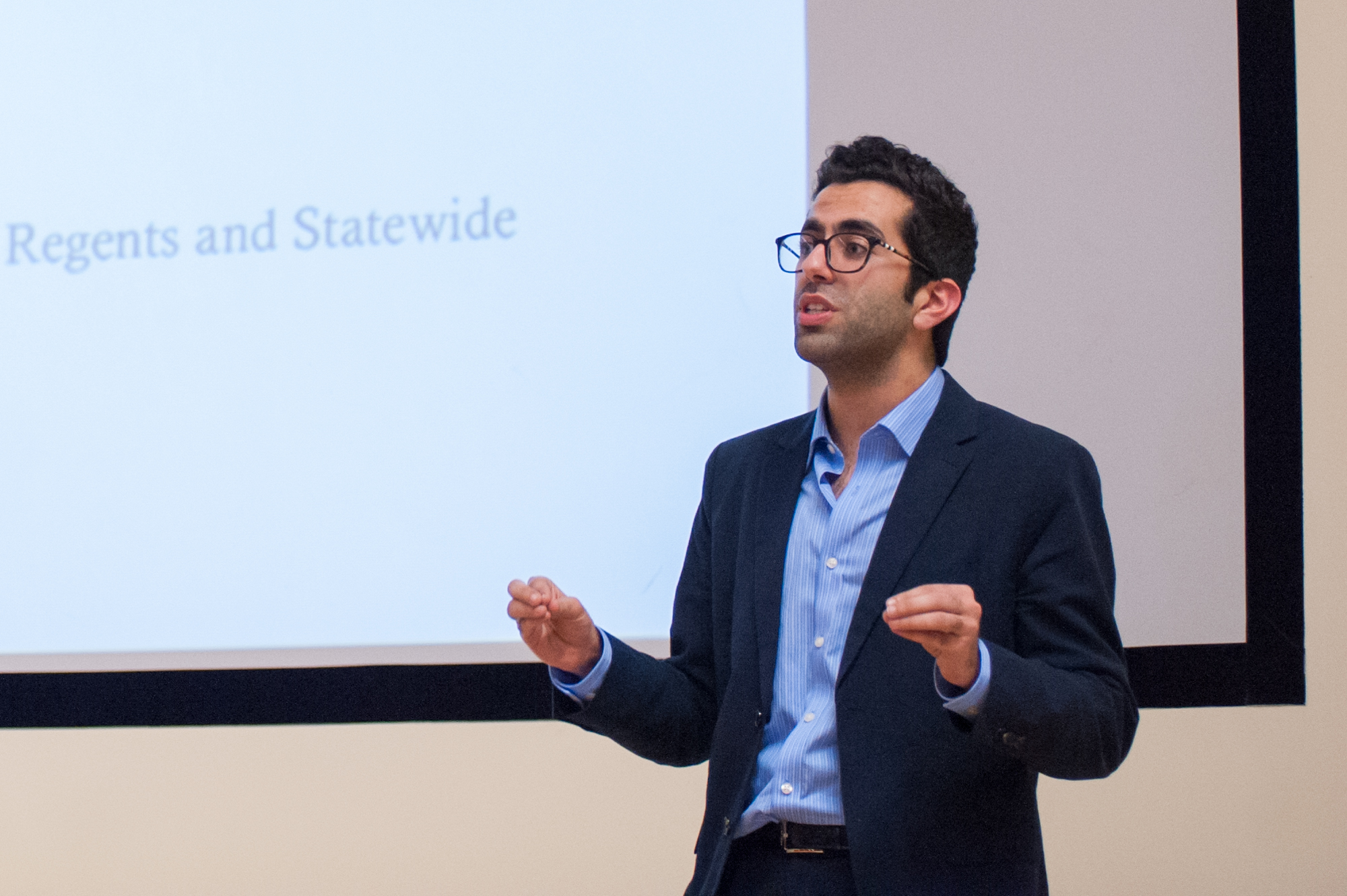 Abraham “Avi” Oved will assume the role of the 2015-2016 University of California Student Regent on July 1, succeeding Sadia Saifuddin who served the past year as the Student Regent-Designate.

Oved is a fourth-year economics major at UC Los Angeles, where he participated in the Jewish Student Union and the Hillel organization, and previously served in student government as the Internal Vice President. Oved will serve as the forty-first student regent since the position was established in 1975 and is the third undergraduate to sit on the UC Board of Regents in the last decade.

Oved said in addition to continuing to push for initiatives proposed by previous student regents, including food security and resources for undocumented students, he is currently working on a shared governance proposal. According to Oved, the proposal would create a third student seat to serve as an adviser to the student regent and would revive a committee on student life to ensure the students’ challenges are regularly brought to the Regents’ attention.

“Both Sadia and I are undergraduates and no matter how much we studied and how much we tried to learn about the issues graduate and professional students faced, we still never lived through that experience so there is an inherent disadvantage there,” Oved said. “The student adviser position would be to compliment that perspective and have someone from a different educational program fill that seat.”

According to Oved, the idea for the committee on student life is based on a committee formed by the 2007-2008 student regent Benjamin Allen.

“The [committee on student life and alumni affairs] … was an opportunity to talk about different student issues at the Board of Regents level,” Oved said. “Right now there isn’t a home for the student experience on the Board of Regents agenda. It’s really important to make sure we’re using the space to educate the regents about what’s going on our campuses and to really re-engage them into the student life and student experience, because some of them are disengaged.”

According to Saifuddin, the student regent position is unpredictable and brings many challenges, the biggest of which is currently the issue of rising tuition costs for UC students.

“One of the big challenges he will face is continuing to search for a sustainable and stable source of funding for the UC during the two year tuition freeze,” Saifuddin said in an email.

“We were going to see tuition increase, but those that were going to pay the brunt of the increase were middle-income students … who don’t qualify for financial aid because they make too much, but yet they can’t afford their education because they don’t make enough,” Oved said.

According to Oved, only 5 percent of the UC’s $8.6 billion endowment goes towards operating the university, and if that amount was raised to 6 percent or 7 percent, students would not have to face the possibility of rising tuition costs.

“That’s a single source of revenue for the university to cover its operational costs,” Oved said. “When the UC doesn’t have enough money to cover its operational costs, they turn to tuition to sort of serve as a remedial measure … [operating using 6 percent or 7 percent] can add another healthy source of income for the university.”

Oved said while participating in UCLA’s student government, he partnered with a mobile safety application known as Circle of 6 which works to prevent sexual assault. The application informs six friends of the location of the user at the press of a button, and can be specialized depending on the needs of each specific campus, according to Oved.

“The White House charged these new startups to create effective campus safety technology for college campuses … Circle of 6 was the winner of that tech grant,” Oved said. “We created a UCLA-specific Circle of 6 app which essentially centralizes emergency communication efforts that students would need in the event of an emergency … Different students, different campuses have different needs and so it’s important in order to develop a model that works for them.”

“She actually forwarded me a discrepancy in UC policy and UCSB policy in terms of statute of limitations on reporting sexual assault,” Oved said. “It was removed within a matter of a week at UCSB and all other campuses were under review to make sure that they were in compliance with UC policy.”

On Tuesday, the UC Board of Regents special committee nominated Marcela Ramirez as the 2015–2016 Student Regent-Designate. A UC Riverside graduate student in higher education administration and policy, Ramirez earned a Bachelor’s Degree in economics and French from Cal State Fullerton and a Master’s in counseling from Cal State Long Beach. Identifying as a lesbian and daughter of Mexican immigrants, Ramirez served on the UC Office of the President LGBT Advisory Committee and on a UC Riverside task force to aid undocumented students.

Ramirez said she believes her academic focus on education administration and professional experience in student affairs has prepared her for the position of student regent.

“Higher education administration is what I study,” Ramirez said. “I’ve had a role as a professional and as a full-time graduate student, so I think the experiences I’ve acquired during this time really prepared me to take this on. I just feel ready; I feel like I’ve been in training for ten years and I’m ready to go.”

Ramirez said advocating for student diversity will be her first priority as student regent-designate.

“Her work for students of a multitude of backgrounds will enable her to continue to do what she has been doing,” Kuoch-Seng said in an email. “She works with students, for students, and is a student. I think the combining roles of her more administrative work in addition to her graduate studies and engagement with students will definitely aid her in representing the diverse UC student population.”

Ramirez said she wants to focus on increasing cultural sensitivity through training and “climate reports” that would allow students to share their personal experiences.
“For me, it’s really about increasing the quality of services in advising, mentoring and again professional development opportunities with cultural sensitivity at the core for students, staff and faculty,” Ramirez said. “Everybody has to be able to feel safe on the campus; everybody has to feel honored and validated for who they are.”

Ramirez said she hopes to learn from Oved, Saifuddin and other former student regents’ experiences in the position of student regent.

Ramirez said as a student regent, she wants to look into more sustainable alternatives to the recently approved tuition freeze.

“Those conversations are going to continue, and I anticipate that there will be different opinions on that,” Ramirez said. “I just look forward to being a part of the conversation and communicating with folks what the board is talking about.”

Ramirez said she wants to address mental health through a “culturally sensitive lens.”

“Students can get targeted for different parts of their identity,” Ramirez said. ‘That means they’re going to be able to access service and care in ways that are respectful to their religious diversity, their cultural diversity, their LGBTQ status, undocumented status … whatever that might be.”

According to Saifuddin, Oved sees the good in every situation and takes on challenges with a “positive mindset.”

“He has learned so much since last year,” Saifuddin said in email. “Particularly, I think the student regent tour and our meetings with students and administrators from all 10 campuses has helped him learn how to navigate different spaces while remaining true to himself and his values.”

Oved said students are the majority in the UC system, yet have little representation in the board.

“The largest stakeholder of the UC is the students. It’s 240,000 students strong, yet we only have two seats at the board of regents and one vote,” Oved said. “It’s incredibly important that we make sure the student perspective is being afforded the opportunity to shape the trajectory of decision making at every tier of leadership.”

A version of this story appeared on page 3 of Thursday, June 4, 2015’s print edition of the Daily Nexus.