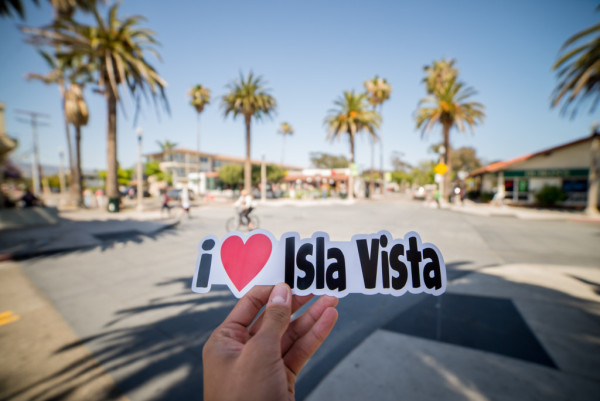 Project I <3 Isla Vista will begin its campaign to raise money for local charities, while supporting local businesses on June 1 by selling stickers at select locations around Isla Vista.

Stickers will be sold for $4, with $1.75 going to charities, $1.25 going to cover the cost of production and distribution and $1 going to the business that sells the sticker. Businesses selling the stickers include Otaco, Hana Kitchen, Kaptain’s Firehouse BBQ, Hempwise and Sorriso Italiano.

Hana Kitchen and Otaco owner Weston Suh said he started this project to help raise money for local charities such as Adopt-A-Block and I.V. Youth Project. The campaign is intended to give residents a way to both show their I.V. pride and support local businesses and charities at the same time, according to Suh.

“I love Isla Vista … and the students here are really proud of living in I.V. and they know they have something special,” Suh said. “As great as it is, I know it can be so much more … Everything takes money.”

Local charities often struggle to secure funding for their projects, which makes it very difficult to focus on achieving their goals, according to Suh.

“I.V. is not really a city — one of the minuses is that funding is always an issue,” Suh said. “A lot of organizations have to spend so much time running around trying to get funding that they can’t focus on their projects … it’s kind of a catch-22.”

Suh said he hopes the stickers will be just the first part of the campaign and plans to expand it if students respond positively.

“Right now, we just have bumper stickers, but hopefully we can expand to bigger things and raise tens of thousands of dollars,” said Suh. “That’s really the goal … There’s a lot we can do.”

According to Suh, Adopt-A-Block and I.V. Youth Project are the first charities that he hopes to work with, and more will follow as the program expands.