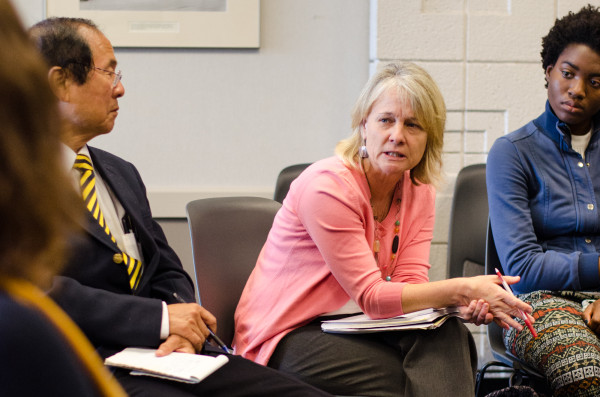 The “It’s Not On Us, It’s On You” campaign leaders and survivors of sexual assault Alejandra Melgoza, Melissa Vasquez and Lexi Weyrick organized an open forum with Chancellor Henry T. Yang and other university administrators Friday morning in the UCen’s State Street room to discuss UCSB’s handling of sexual assault cases.

At the forum, students worked with administrators to clarify the 13 demands Melgoza, Vasquez and Weyrick made at the May 13 sit-in in Yang’s office. Attendees had the opportunity to ask questions of the campaign leaders and participating administrators regarding current sexual assault policies and the 13 demands.

“We cannot select individuals due to their race or gender, we can’t do that, but we definitely can cast very broad nets and make sure our pools are very diverse so naturally, obviously, we will be more likely get a diverse candidate,” Alcaino said.

Off-campus Senator and second-year Chican@ studies and history of public policy double major Melgoza said the fifth demand calls for the creation of an Associated Students Survivor Fund to cover medical, travel, housing and other expenses for survivors of sexual assault.

According to Gaucho Consent Co-Chair, Take Back the Night Executive Board member and second-year sociology major Weyrick, the A.S. Survivor Fund would come from donations and would not increase student fees.

“This isn’t coming from student fees, this doesn’t raise tuition or anything like that,” Weyrick said.

Weyrick said availability of an A.S. Survivor Fund would not lead to false accusations of sexual assault.

“I really do not think there would be any kind of people that would want to first go through this and abuse these funds,” Weyrick said.

Melgoza said Yang supports further examination of the second demand, which would increase the minimum suspension from one quarter to four quarters for students found guilty of sexual assault.

“The university still has to look into the legalities of that, and that is actually higher up, that is not something we can just do as a campus, so the Chancellor has given his support for a recommendation to pass that on,” Melgoza said.

“Often times, immediate removal from housing doesn’t happen,” Melgoza said. “It is very interesting how students are removed from housing for playing loud music … but when it is about interpersonal violence it is not often talked about.”

“Chief Olson is really big on having a diverse department that represents all of campus,” Arviso said. “We are really excited about that and most of those female officers and certainly a handful of male officers have expressed an interest in working with these types of crimes.”

Office of Judicial Affairs (OJA) Assistant Dean of Student Life Suzanne Perkin said she needs further information regarding the eighth demand, calling for a method for students to evaluate and share their experiences with OJA.

“We need something formal,” Perkin said. “Like here is an email that I got that was insensitive or here is an interaction that I had on this date that didn’t sit well with me or something like that. Something very concrete instead of just ‘it was mishandled.’”

According to Weyrick, students who have bad experiences with OJA should be able to give a detailed report.

“That is going to take time and trust for students,” Weyrick said, “It is not a grievance thing. It is a legitimate concern with how their case was handled, with who they were working with, so there would of course be solid like some sort of information something to relay, it would be specifics.”