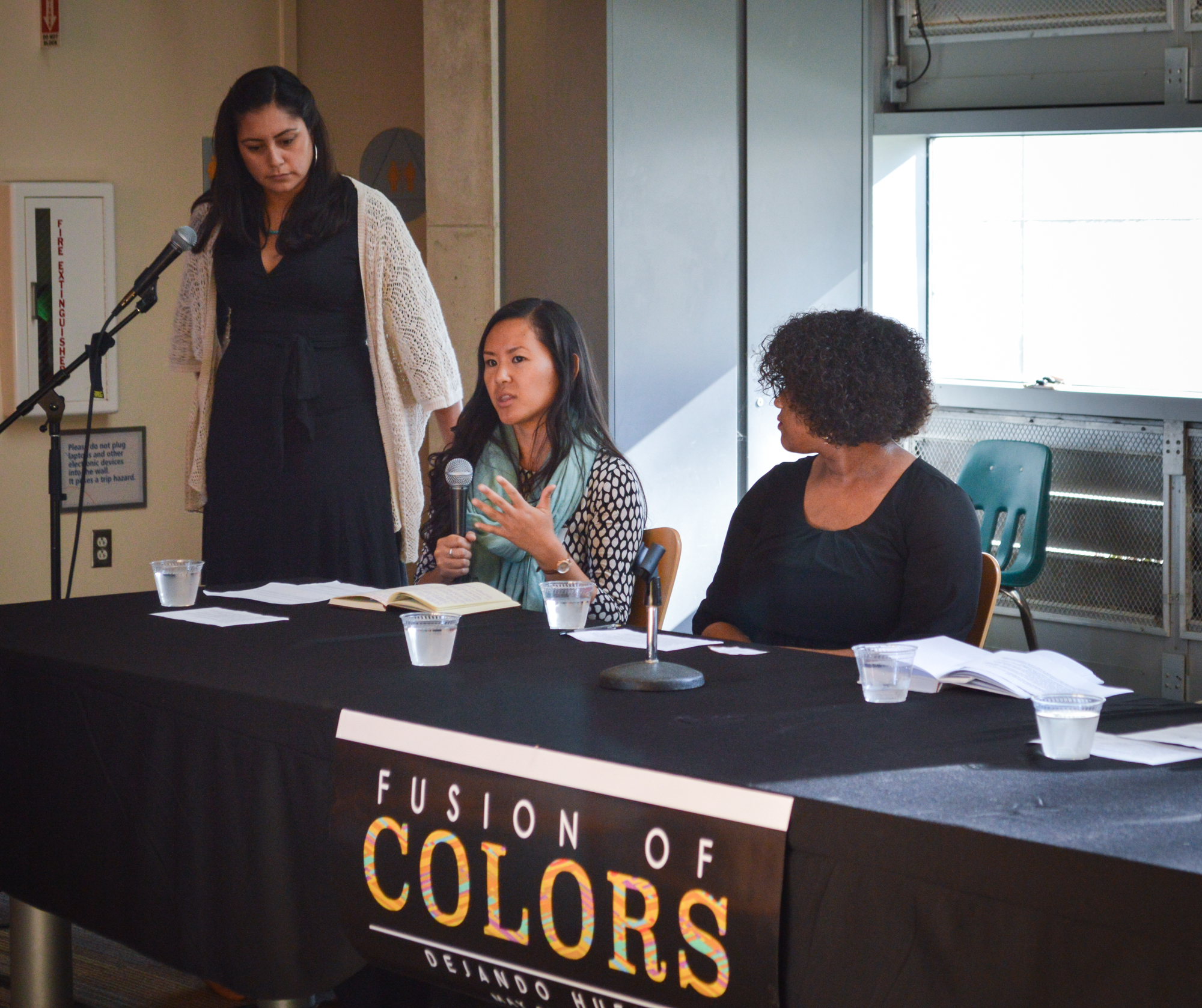 Discussion of diversity within different racial and ethnic groups was of great importance at the Womyn of Color Empowerment Gathering at the SRB. Alexander Payne/Daily Nexus

Several UC Santa Barbara campus groups hosted the Womyn of Color Empowerment Gathering in the Student Resource Building last night as part of the “Fusion of Colors: Dejando Huella” Latin@ culture appreciation week to address issues regarding women’s status in educational spaces, barriers against the progress of women and success stories about fostering support amongst women of color.

The event was hosted by La Mesa Directiva of El Centro, Educational Opportunity Fund and the Alpha Tau Chapter of Phi Iota Alpha fraternity, among other organizations.

Powell said she experienced difficulties growing up in a black family and striving to be a role model for younger members of her family.

Nguyen said she found it difficult to find her place at UCSB coming from a Vietnamese background.

“In a lot of identity development at the university, folks that know me in the audience know that I talk a lot; I actually used to not do that,” Nguyen said. “I was a passive, quiet, introverted, Vietnamese-American young woman who was all about academics, but within that journey and that framework I needed to figure out who I was.”

Phommasa said she is interested in studying disparities in education for the Southeast Asian community because her parents lived in refugee camps for two years in Laos before coming to America.

“I was very determined to understand and work with Southeast Asians in higher education, so my research and dissertation has been focusing on persistence and retention issues for Southeast Asian students,” Phommasa said.

Bradford, a member of the Choctaw Nation Bear Clan, said it has been challenging for Native American tribes throughout history to access higher education due to institutionally mandated laws established to prevent the growth of Native American culture in education. Native American students comprise only 0.86 percent of the student body at UCSB, according to Bradford.

“We were taught by watching, by listening and by doing, and in the university there is a lot of reading and writing but … my native language wasn’t written down until the early 1800s, just a few years before my tribe was removed during the Trail of Tears,” Bradford said. “A lot of our ancestors, including my grandmother, were shipped away to colonial boarding schools, where you weren’t allowed to speak your native languages.”

According to Rodriguez, it is hard to find support as a woman of color at UCSB where campus resources such as Counseling and Psychological Services (C.A.P.S.) and Campus Advocacy Resource and Education (C.A.R.E.) do not align with her identities.

“The more identities you have, the harder it is just to navigate campus,” Rodriguez said. “You don’t have resources like C.A.P.S. or C.A.R.E. that really reflect the diversity that you need in order to survive and in order to be okay and to function as a student.”

“[This is about] having communities that are already established [and] not feeling pressured to create those communities yourselves or waiting for an event like this in order to talk about issues that are affecting you,” Khabra said. “Just being at UCSB, it is really hard to talk on a regular and daily basis about issues that you are interested or just learning more about different communities without coming off as offensive.”

According to Powell, there are further differences in identity within specific racial and ethnic groups on campus.

Powell also said students should focus on solidarity as the foundation for building structures and resources for women of color.

“Once we do that, we build a stronger infrastructure to work together. Because how are you going to build a coalition and move forward and be progressive together if the unit that you already have is broken?” Powell said.

Rodriguez said UCSB’s recent recognition as a Hispanic Serving Institution (HSI) should be reassessed because the term “Hispanic” refers to an oppressive political background.

“The term ‘Hispanic’ is a government term; it is oppressive to a lot of Latino/Latina, Chicano/Chicana folks, so that within itself needs to be re-evaluated,” Rodriguez said. “Now that we are an HSI, funding really needs to go back to the communities and more funding needs to be given to the orgs that are really doing the work to recruit student of color.”

A version of this story appeared on page 3 of the Thursday, May 28, 2015 print issue of the Daily Nexus.