The Daily Nexus
Sports
NBA Finals: The Bay Takes on The King
May 28, 2015 at 5:05 am by Daniel Moebus-Bowles and Elliot Thornton 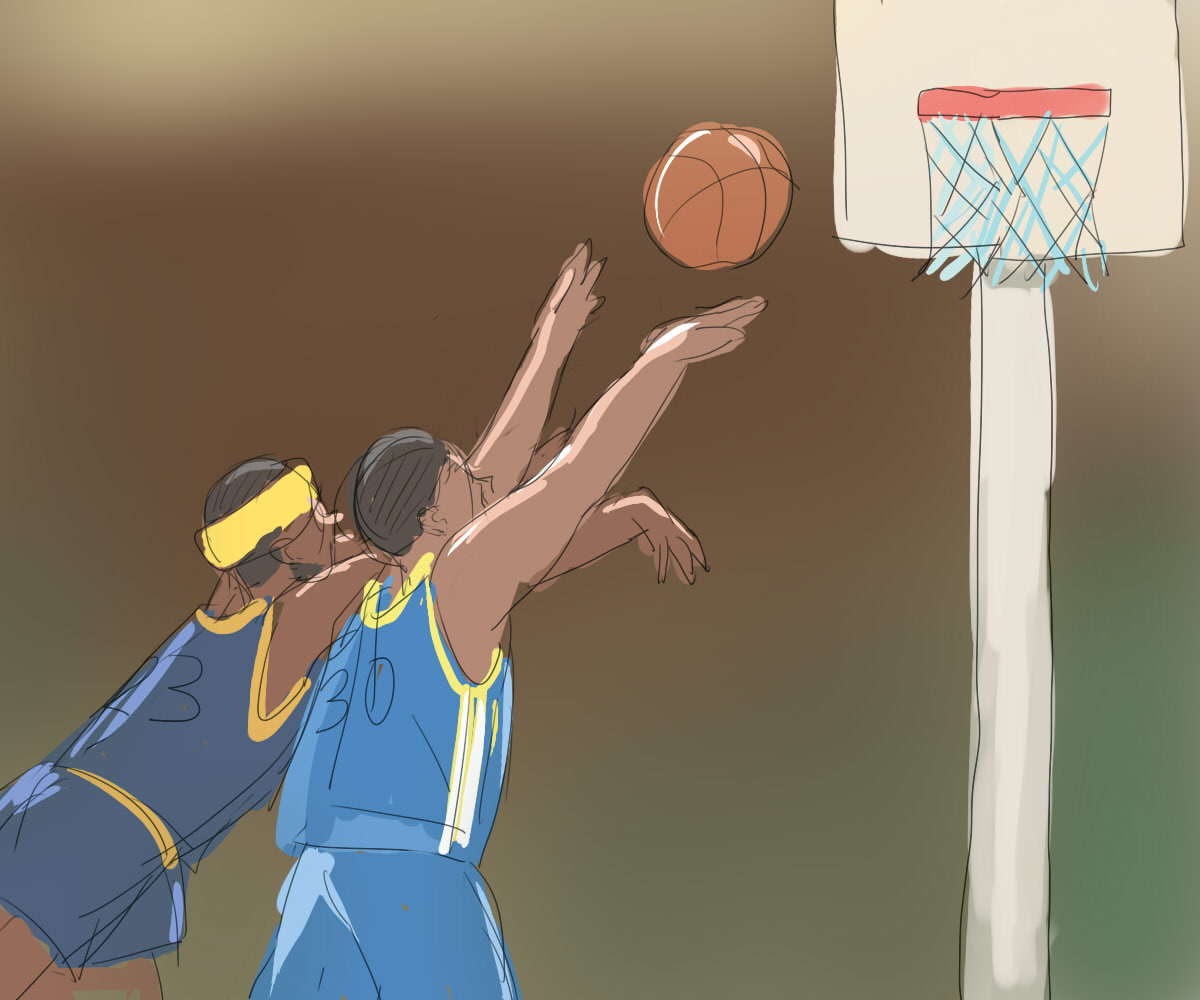 The Western Conference Finals are officially a wrap. Who would’ve known that a Lil’ B curse on James Harden would actually send his team packing on a long ride home back to Houston?

After failing to receive recognition for his cooking celebration dance, the Oakland-based rapper had his revenge Wednesday night as Harden had one of the worst performances of his NBA career. The Rockets’ premiere guard went 2-11 from the field including a playoff record 13 turnovers. After his 45-point outing on Monday, the hard-nosed Warriors’ frontcourt shut down the bearded assassin limiting him to a dismal 14 points. It’s safe to say the potential MVP candidate won’t be doing his infamous “stir the pot” celebration anytime soon.

This Bay Area squad really lived up to the hype and showed why they are the number one team in the West. Dominating on both ends of the floor, the Warriors were hungry for this win diving for loose balls, not giving an inch on the defensive glass and literally ending the series with a bang with a couple high-flying dunks from Harrison Barnes and Andre Iguodala.

Now the stage is set for the Finals. The high-powered Warrior offense will face off against a Cleveland Cavaliers team with arguably the best athlete of our era in LeBron James. So we know the Warriors are good, we know how talented they are, but do they really stand a chance against the red-hot Cavs?

Let’s break it down a bit. Heading into the Finals with two series sweeps against the Celtics and the East’s No. 1-seeded Hawks, squad LeBron has walked into the big dance like a breeze. It’s ironic that the former hometown hero that was once despised for abandoning his team has now handed Cleveland a ticket to the Finals. But I’m sure the Akron community isn’t complaining at all.

Whatever the case, the Cavaliers have gotten hot at the right time and they will be a tough matchup for this young Warriors squad. It won’t be any smooth sailing for the Splash Brothers of Steph Curry and Klay Thompson as this Cavs team is stacked with veteran potential that can step into the big moment at any time.

Don’t believe me? I’ll let the numbers speak for themselves. The Cavs have seven vets who have made it to the NBA Finals at least once for a combined total of 8 NBA championships. Talk about knowing what it takes to win.

From the reliable shooting of veterans Mike Miller and James Jones, to the streaky guard play of Smith, Shumpert and Dellavedova, to the magician-like performance of Uncle Drew (Kyrie Irving), this disciplined Ohio team can attack you from all angles.

Oh yeah, did I also mention their secret ingredient, LeBron James? A four-time MVP winner, 11-time NBA All-star with two Finals MVP awards and two championship rings. I mean, what more can you ask for?

This guy has not shied away from the bright lights. In fact, he rather embraces it. He takes command of his team and expects greatness each and every night out of it. His leadership can be a testament to the impressive play of Iman Shumpert and J.R. Smith.

The former Knicks duo really stepped it up in the previous series against the Hawks, adding a spark on the offensive end that the Cavs lacked. Averaging a combined 30 points per game, Shumpert and Smith have turned it on with the absence of combo forward Kevin Love.  The two will really be the X-factor heading into the Finals.

So the Cleveland Cavaliers have some quality veterans, a deep bench, and the highest rated player in the 2K videogame on their side. Think it will be an easy sweep in four? Wrong.

This 67-15 record Warriors club also has some familiarity with winning. Coached by a five-time NBA champion and the point guard alongside the most iconic player to ever step on the court in Michael Jordan, Steve Kerr has done all the right things to get his team to this very moment. I’m sure the former Arizona Wildcat has a few tricks under his sleeve.

Look for the Curry-Thompson combo to wreak havoc on this Cavaliers team. Arguably the best guard duo to shoot the deep ball, their shooting will be the key to the Warriors’ success if they hope to win.

I guess having the NBA’s Most Valuable Player on their team also helps out quite a bit, not only making plays for himself but also others around him. The scrappy play of Draymond Green will also be something to look out for, especially against LeBron James. Finally, the young prospect Harrison Barnes will have to embrace a bigger role heading into the biggest series of his life next Thursday. The three-year player had a career-setting performance in Game Five, shooting an efficient 50 percent from the field for 24 points. He’s heading into the Finals with confidence and that’s exactly what his team needs from him.

The wait is finally over, and basketball’s most iconic series is about to take place. Regardless of matchups, the stats, the wins or losses, this series will definitely be one to remember pairing two of the NBA’s most talented teams in a fight to the finish. As fellow basketball fans, it is time to sit back, relax and let the Finals speak for itself.

The immensely athletic and dominant player whom they call “The King” has sealed his chance to achieve his childhood dream of bringing a championship home to Cleveland.

The city itself has never seen an NBA Championship or Super Bowl, and have just one World Series win that took place over 50 years ago. It is without question that a statue of LeBron James will be in our near future if he indeed does complete this fairytale. The real question is whether his streaky teammates will show up or get shown up by a gang of young, hungry ballers.

With Kevin Love sidelined for the playoffs and Kyrie Irving just hopefully just suiting up in all seven games if necessary, it could come down to players who have recently shown some good signs against a Hawks team that flaunts a solid player at every position. That is why guys like Tristan Thompson and Matt Dellavedova are going to play a key role in this series.

Delly has been a fun topic in the media lately and, of course, it hasn’t been just because of how well he has played in Irving’s absence. This former Australian football player has made a name for himself for being tough, going all out and, most of all, being disruptive and annoying — just what the Cavs may need to mess up the nearly invincible Golden State team. If Dellavedova gets his minutes, he can provide his style of ball and do Cleveland some good.

Tristan Thompson, who is nearly averaging a double-double in the playoffs, has shown his worth to this Cleveland line up going toe-to-toe with the likes of Horford and Millsap and coming out pretty successful. He, Perkins and Mozgov are going to have to shut out guys like Bogut and Draymond Green who can ultimately drive the series their way. The defense from these guys down low is going to be challenged as well from everyone on the floor from Curry to Iggy to Harrison Barnes. If the Cavs front court doesn’t provide the necessary help defense and lock up the boards, there could be no help for King James.

We all know that, despite all these guys on this roster, ultimately, this series will come down to how this man heading into his fifth straight Finals appearance can lead this band of injured misfits to four wins. His will to win a basketball game is like nothing that we have seen in a while and he surely impacts a game more than any other player out there. Let’s also not forget that this is not his first dance, not even in Cleveland, which is more than every player on the Warriors roster can say.

LeBron’s matchup with First Team All-Defensive player Draymond Green will be one for the cameras to watch carefully since Draymond will probably be more effective than some guy blowing in his ear. We’ve seen what happens when good defenders, like Kawhi Leonard, get to see this guy for multiple games. Some of them start to figure out the puzzle.

The Warriors have the better team, so LeBron is going to have to add a few more pieces to it if he wants to wear the crown once more — and for the first time at home.  An MVP, his supporting cast and their home court advantage will be waiting to wake him up from this fantasy.

A version of this article appeared on page 11 of May 28, 2015’s print edition of the Daily Nexus.