The Daily Nexus
Spoken Word and Poetry
MCC Hosts Open Mic Night to Honor the Victims of May 23rd
May 28, 2015 at 2:00 pm by Margarita Danielyants 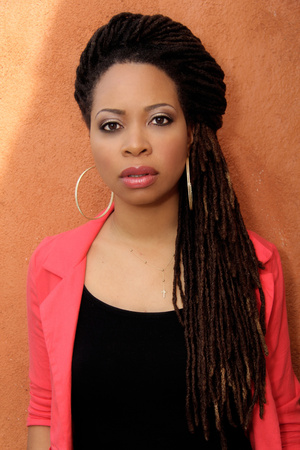 Poet and performer Thea Monyee headlined for the UCSB Multicultural Center’s Spoken Word event in honor of the victims of May 23rd. Photo courtesy of thepoetslist.com.

If you didn’t stop by Crushcakes on Thursday evening, you definitely missed out on some sweet treats, and I’m not just talking about cupcakes. The MultiCultural Center hosted its quarterly “An Evening of Self-Expression” at the café. It was the second event in the MCC’s “Come Together” series, which focuses on I.V. Remembrance related to last year’s May 23 tragedy.

Evening of Self-Expression is open to any artists willing to express themselves through various means such as spoken word, music, dance and poetry, all the while informing the public on issues affecting students of color, women and other marginalized groups.

The café’s seats gradually filled up as the DJ played Bobby Caldwell’s “What You Won’t Do For Love” in the corner. Coffee cups were distributed and, as the crowd settled in and sought comfort from the wind outside, lights dimmed and the evening finally began.

The open mic night was led by two-time Def Jam Poetry performer Thea Monyee who came all the way from Los Angeles to be the MC. The incredibly energetic poet dressed in a long tribal print romper hopped onstage and cracked jokes about how “you should never date a poet” and how that clearly didn’t work for her husband. She proceeded to kick off the show with her poem titled “Beauty.” Her powerful voice boomed as she spoke about unrealistic standards of beauty. She left the audience with words to reflect on by stating that “beauty that you have earned is beauty well deserved.”

Poet Keith Mar was next. He described his experience of being an Asian American and the frustrations that come with accepting oneself and being able to “celebrate his Asian-ness.” In his poem “An Ode to Basketball and Asian American History Month,” he described himself as the “founding member of the joy dunk club” and “the spirit of resilience.” The audience cheered when he said that it was about time he celebrated himself.

David Hur, asking everyone to gather around him and vibe with him as he rapped about being Asian, captivated the audience. He reminded the crowd that Elliot Rodger was half-Asian himself. Hur’s piece tackled the difficulties hapas face in forging an identity.

Richard Martinez, father of one of last year’s shooting victims, dedicated his poem to Shannon Watts, with whom he protested against the NRA. He also described the open mic night as something that serves as a healing space. In his “band of brothers speech for moms,” he stressed “that our children deserve better than the fear of death that [NRA] preach.”

Upon her return to the stage, Monyee began with a monologue describing the stressful and terrifying undertaking of parenting in the modern era. This speech served as segue into her poem “Gethsemane.” Her powerful voice gripped the audience’s attention as she expressed her sympathy for the mothers of deceased brown revolutionaries.

Another performer by the name of Abraham Lazama left his piece open to interpretation for the audience.

“From womb to womb, my life is never mine to keep … the day I was born was the day I started dying.” Although his poem was short, he left the audience in deep thought.

Lazama concluded the list of people who signed up to perform for the night. Monyee, however, did not let that stop the evening from continuing. She insisted that volunteers come up and perform anything they want.

A brave man by the name of Scott volunteered to freestyle. He quoted various great personas, from Martin Luther King to John Lennon, emphasized the importance of love and concluded with an a cappella rendition of The Youngbloods’ “Get Together.”

Mar and Hur also went up on stage again. Mar dedicated his poem to “Six people [he has] never met … whose story [he] carried in [his] heart for the last year,” while Hur performed yet another rap piece, this one titled “Straight From the Brothers and Sisters.”

Jeremy, the last person to go on stage, read his poem “Peace,” in which he described the different facets of peace and the importance of appreciating what we have while we have it.

Before she closed off the evening, Monyee shared some wise words with the crowd by speaking about love.  She stressed, “No one in this room has any excuses for not loving,” and with that, the MCC’s Evening of Self-Expression came to an end.

Annie Hikido, who came to support her friend, Hur, had some insightful thoughts to share when asked about what she thought of the event.

“There is just so much violence in the media, it’s so crucial to create these spaces of healing in the midst of all this violence and tragedy.” Hikido’s words struck a chord.