The Daily Nexus
News
Gauchos Protest in Response to Refugio Oil Spill
May 28, 2015 at 5:01 am by Beth Lebens 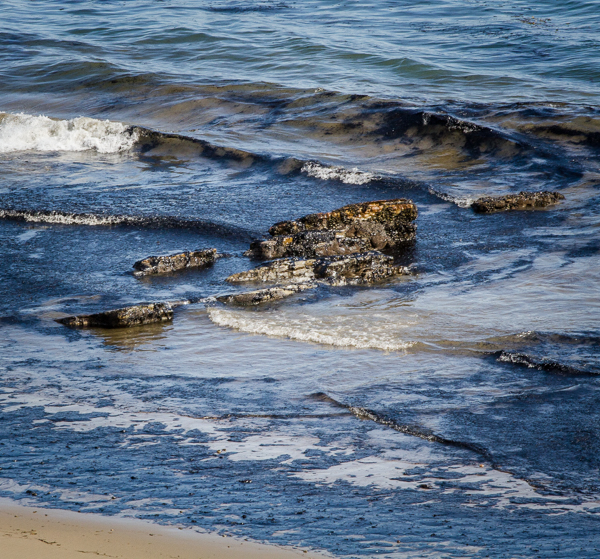 Today’s rally outside Campbell Hall at 12:30 is in response to last Tuesday’s oil spill at Refugio Beach. Various campus organizations are pushing for the UC to divest from funding the fossil fuel industry. Robert Johnson/Daily Nexus

A group of UC Santa Barbara community members representing various campus and state organizations will hold a rally outside Campbell Hall today at 12:30 p.m. to protest UC’s investments in the fossil fuel industry.

The event responds to the May 19 Refugio Oil Spill of over 100,000 gallons as an event that represents the environmental damages the fossil fuel industry can cause, and calls on the UC to stop funding its companies. Organizers encourage all students to attend and continue learning about the fossil fuel industry divestment movement, regardless of prior involvement with environmental causes.

Rally organizer, Environmental Affairs Board (EAB) publicity chair and first-year linguistics major Abi Pastrana said the Refugio Oil Spill has the potential to move UCSB students to action because the ocean is so central to the community’s lifestyle.

“It’s something that’s so close to us, and I feel like the reason it resonates so much with the students here at UCSB and the entire community here is because the ocean is such a big part of us,” Pastrana said.

“It’s a very hard thing to think about, but with the oil spill we’ve seen it on our beaches and covering our ocean,” Williams said. “I really hope students are talking about what role it plays in our economy and if we really want to have that.”

According to Williams, UCSB invests in ExxonMobil, whose oil runs through Plains All American Pipeline’s system, meaning it indirectly contributed to the Refugio Oil Spill.
“UCSB, through its investment policies, actually financed the oil spill,” Williams said.

LeQuesne said the rally will focus on the Refugio Oil Spill as “one instance of negligence,” but protest greater issues with the fossil fuel industry.

“We want to show off the fact that this oil spill isn’t an isolated event and that it is part of the much wider problem of the fossil fuel infrastructure and the way in which it consistently puts its profits over people and the safety of the local community,” LeQuesne said.

Williams said she hopes the rally is a “launch pad” for students to consider long term solutions to environmental and political issues regarding the fossil fuel industry.

“As people affiliated with the university, whether you’re an alum or student, faculty or staff member, we actually have a lot of power in this,” Williams said. “Let’s also do our part in helping to clean up the beach, but when the cleanup is done and our coastline is restored, then let’s look at how we stop this cycle from ever happening again in the future.”

According to Pastrana, students will further engage in the rally if they realize the personal and community-level implications of the Refugio Oil Spill and the fossil fuel industry, in general.

“The main part is making people really understand that this is an issue that affects everyone in one way or another, making sure they see all aspects of it, the social injustice. And not only the environmental injustice, but everything else that’s involved and all the other people and victims that are suffering because of this oil spill,” Pastrana said.

Pastrana said while UCSB’s campus is environmentally friendly, it is part of an institution that funds the environmental harm the fossil fuel industry can cause.

“UCSB has recently been named as the greenest public university. But at the same time, are we truly green if we support indirectly through UC investing in companies that are responsible for oil spills like the one that we just had?” Pastrana said.

Williams said while UC divestment campaigns are very difficult because many stakeholders do not understand the finances behind the university’s investments and changes that must be UC-wide, she thinks the fossil fuel divestment movement is making a lot of progress.

“There are really strong campaigns at each of the campuses; we have faculty who have become really engaged, we are beginning to talk with chancellors who have actually had meeting with Regents and this past September won the $1 billion of investments into climate solutions,” Williams said.

Pastrana also said she is confident UC will eventually divest from the fossil fuel industry due to pressure from movement across different campuses.

“We understand this is something major and there are a lot of obstacles we have to overcome, so we’re here for the long run,” Pastrana said. “We understand it could take years, but we are making really big movements all across California at each UC. I really do honestly 100 percent feel that this is feasible and this will happen.”
According to LeQuesne, the rally will present opportunities for participants to join campus environmental movements.

“We’re going to be showing ways in which students can actually get involved with campus organizations to move this anger in a more positive way and channel it into organizations like Students Against Fracking, the fossil fuel divestment movement and the Environment Affairs Board,” LeQuesne said.

Williams said she hopes for a large turnout at the rally and wants to see students “start a conversation” about their role in pressuring UC to divest from the fossil fuel industry.

“Everyone should come tomorrow that cares about communities or environment or anything,” Williams said. “Let’s come together, let’s mourn together and be angry together that this oil spill did happen, then let’s look at ways that we as students can harvest the power of our university to stop it from happening ever again.”

A version of this story appeared on page 4 of the Thursday, May 28, 2015 print issue of the Daily Nexus.

I was on the pier for the 1969 protest, and we almost got arrested. But at least there was an effort to keep the California coast from being subject to too much oil. But now it starts again, with a bunch of liars, from what I read, trying to minimize the damage. When I was in school at UCSB, LBJ was president. He was in on the Kennedy assassination. Check out his interview, Ruby interview and his girlfriend’s interview. It is obvious. And big oil, big finance and Israel were likely interested parties because they all gained something from JFK’s… Read more »