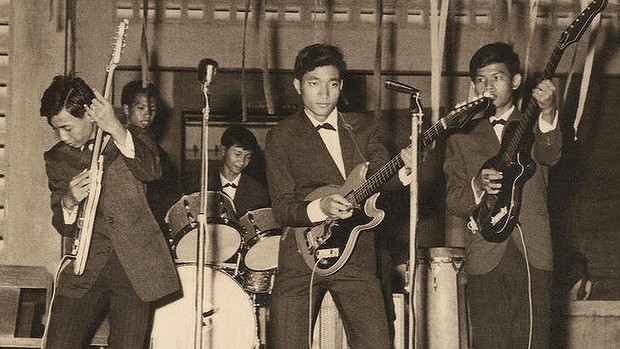 In the mid ’70s, a communist party that went by the name of Khmer Rouge killed over two million people in Cambodia. The Khmer Rouge regime led by Pol Pot sought to restore Cambodia to an agrarian state. In an attempt to destroy the cultural values associated with the “old” society, they targeted musical artists — those who were most in touch with past ideals and could directly communicate them to the people through music.

“Don’t Think I’ve Forgotten” tells the story of the music that was tucked away during that era of oppression and it does an excellent job of broadcasting it to us through the perspective of many, such as music fans, music producers, royalty and even the surviving artists themselves.

The director, John Pirozzi, seriously knows how to tell a story. This documentary is the result of nine total years of work; the film itself was completed just several weeks before the world premiere date, and the colossal effort that was put into it does not go unnoticed. “Don’t Think I’ve Forgotten” is rich with never-before-seen clips of live performances from the ’50s, ’60s and ’70s, recordings of lost songs from Cambodian pop superstars such as Sinn Sisamouth and pictures of other musical artists that are gone now, but still very much alive in the hearts of the Cambodian people.

Essentially, this film is meant to take you back in time to the heyday — a time of hard rock and nightlife in the few decades before the Vietnam War and the Khmer Rouge swept through Cambodia and lay siege to Cambodia’s cultural capital, Phnom Penh. It is a nostalgic anecdote. But it is not all Pirozzi telling the story; it’s those that had some direct connection to the musical movement. The director conducted almost 100 hours worth of interviews, and in those interviews, we get to hear individual stories of discovering music. These interviews make the film extremely personal. As we learn the names and faces of those a part of the music scene, we become connected with them on an emotional level. It’s as if these people are talking directly to us — having a heart-to-heart with us — and disclosing with us the fond memories of their earlier days.

Pirozzi takes the personal thing to a whole new level by incorporating short scenes of Cambodian everyday life of the time that play as the interviewees share their stories. It’s as if we are teleported back in time to Cambodia and are seeing this moment with our own eyes. It’s genius. Not to mention, the cinematography is breathtaking; in one part of the movie, we are transported to a dance club where “go-go” music is playing and young Cambodians are seen with their big ’60s style haircuts and bell bottoms. It’s all so realistic that it is impossible not to get sucked in.

However, this level of personalization is what makes the end and personal tales of the oppression so heartbreaking. So many of the widely loved musical artists whose songs make up the soundtrack of the film were among the two million killed — it’s certainly a hard pill to swallow. And as tears are shed by the interviewees featured in the movie, tears are shed by the audience members as well.

An emotional roller coaster and treasure chest of hard rock Cambodian tunes from the good ol’ days, “Don’t Think I’ve Forgotten” is a well executed documentary that will appeal to just about anyone. It will make you laugh, it will make you cry and, most importantly, it will make you tap your foot to the beat of the beautiful songs featured in the movie. If you’re not interested in the history, go for the music.