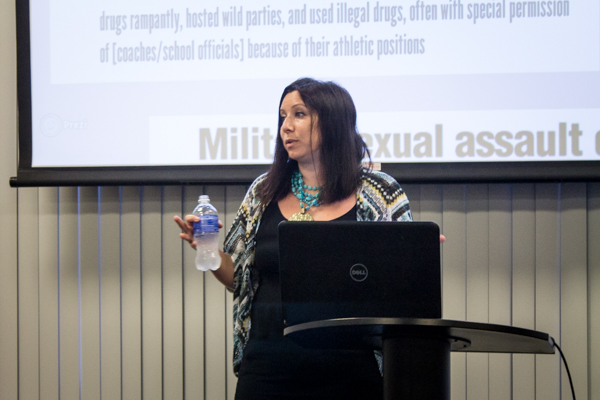 USC professor Kristen Zaleska spoke Thursday about the prevalence of sexual assault within the armed forces, and the similarities and differences between sexual assault in the military and on university campuses. Paris Cullen/Daily Nexus

The Campus Advocacy Resources & Education office hosted a lecture on military sexual trauma (MST) by assistant professor at the USC School of Social Work Kristen Zalesky in the Flying A room Thursday morning.

According to Zalesky, there is a parallel between sexual assault at universities and within the military. According to Zaleski, one in two women and one in 12 men experience MST in the course of their service.

Zalesky said the military and UC face similar difficulties in addressing sexual assault, and neither are particularly effective.

“[UC system’s framework] rarely results in a conviction of the assailant and it’s also true for the military,” Zalesky said. “This university culture, it’s not that different from someone who is 18 and chooses military service, in terms of the sexual boundaries.”

“These are the typical assumptions we make about sexual assault: it’s a random guy in a dark alley; it’s someone we don’t know; they have a weapon,” Zalesky said. “Most often, people who are raped are raped by somebody they have a trusting relationship with — it’s a family member, it’s a boyfriend, it’s an ex-boyfriend, it’s a best friend.”

According to Zalesky, this difference between the idea of a typical perpetrators and the reality of who they usually are makes reporting more difficult.

“That’s why when you look at rape reports it’s so hard to get somebody to report because it wasn’t so clear. He wasn’t wearing a mask in a dark alley as a stranger with a knife right? It was your best friend who you’ve partied with for a year and a half,” Zalesky said. “The reason that we hesitate to report sexual assaults is because we’re so confused because it doesn’t match up with the construct of what we imagined.”

Zalesky also said those in the armed forces who report are typically required to stay in service, as leave for survivors is not granted most of the time, which makes avoiding assailants virtually impossible. For this and other reasons, sexual assault survivors in the military have fewer options than their civilian counterparts, Zalesky said.

Zalesky closed with a brief discussion on advocacy and how to help survivors, followed by a question and answer session with the audience. Zalesky said a more effective strategy for combating MST is not necessarily to encourage women to “not get raped” but rather encourage a culture of bystander intervention.

“I think anything we can do is awesome, especially as college students,” Breen said. “Advocacy work is hard though because it’s hard to see a difference.”

Breen also said her main take-away from the presentation was related to the difficulties MST survivors face in addressing their assaults.

“I took away that it’s very hard to report in the military — that it’s a really prevalent issue,” Breen said.