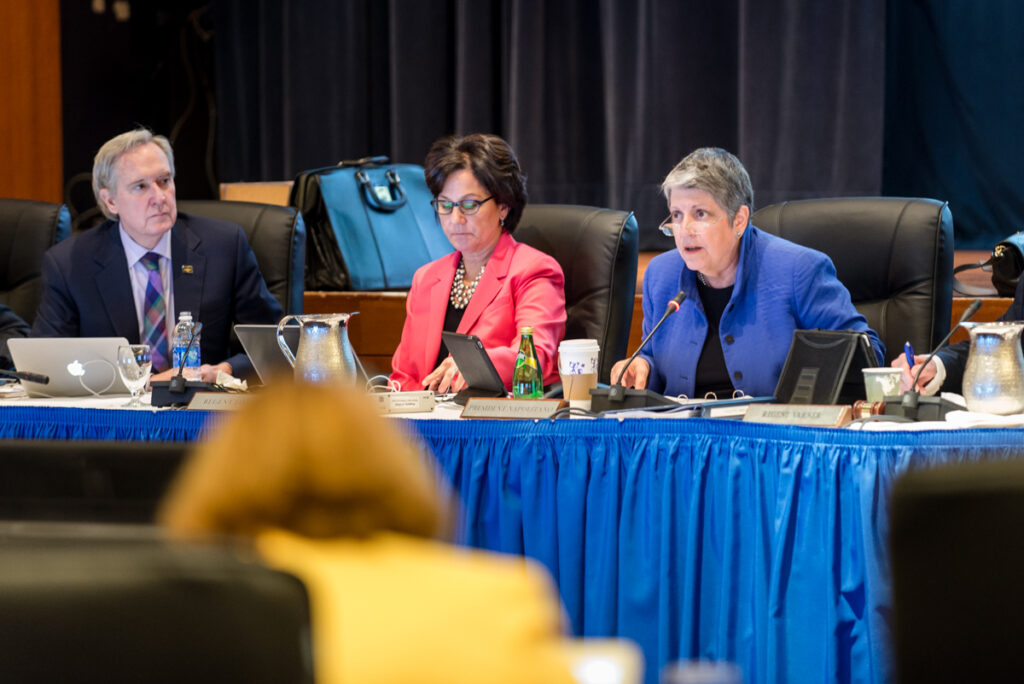 The UC Board of Regents met Thursday at UC San Francisco Mission Bay for their final meeting of the 2014-2015 academic year to discuss planned tuition increases, the current status of the UC Global Food Initiative and the university budget for the fiscal year 2015-2016.

Weiss said after the events of May 23, 2014, he began working with UCSB students and alumni involved in the Campaign to Unload, a divestment campaign comprised of 50 leaders and organizations across the country, to ensure UC divests completely from companies manufacturing guns.

Fourth-year UCSB global studies major Sean Tanabe said he attended the meeting to present a petition to divest from the firearms industry that he wrote the week following the events of May 23 last year. As of Thursday, the petition garnered 45,445 signatures.

“The gun violence in our country statistically affects college students most prominently, and I’m a firm believer that our money should not be invested in the companies that are at the end of supplying those guns,” Tanabe said.

Campaign to Unload Campus Organizer and UCSB alumna Allie Clements said the organization has made numerous attempts to uncover whether or not UC has invested in companies manufacturing weapons, including filing a Freedom of Information Act (FOIA) request.

“Lack of transparency on the part of the university has so far prevented any information from being released,” Clements said. “We’ve tried a lot of different avenues to try and find out if the university is currently invested … FOIA has been pretty much closed doors, some professors have written to the UC Chief Investment Officer, and [UC Student Regent Sadia Saifuddin] has told me, ‘I’ve tried to figure it out, I can’t.’”

According to Clements, the university should publicly take a stance on gun violence at college campuses regardless of whether they are invested in companies manufacturing guns.

“If they are divested, we need them to come out and publically say it and pass a resolution saying they’ll never do it again,” Clements said. “If UC comes out and says, ‘We’re not going to invest in the gun industry because guns are the number one killer of millennials starting this year,’ I think that’s going to send a powerful message to universities across the country and hopefully other universities will follow suit.”

The gun violence in our country statistically affects college students most prominently, and I’m a firm believer that our money should not be invested in the companies that are at the end of supplying those guns. – Sean Tanabe

Weiss said he was impressed Clements took it upon herself to investigate UC’s investment in companies manufacturing guns, and believes more students should be actively working to prevent gun violence.

“Students have a long-time history of changing the world in public activism, and it seems to be sorely lacking,” Weiss said. “Students are in a rare position to impact the way the world changes, and it’s an opportunity they’ll never have like this in life again. Five years from now, they’ll have some demanding job, kids, family, trying to get their career started.”

Tanabe said while he believes the efforts UCSB students and I.V. residents are making to heal after the events of May 23 last year are of the “utmost importance,” individuals should also be actively seeking solutions to ensure gun violence does not continue to occur.

“I want students to realize that healing is a huge part of it. But it is a part of it,” Tanabe said. “There are other things you can do that are more action-orientated that can prevent these things from happening again.”

Saifuddin gave a presentation at the meeting entitled “Institutionalizing Food Security at the University of California,” in which she explained the food crisis afflicting students within the UC system. As leaders of a UC Global Food Initiative (GFI) subcommittee, Saifuddin and staff members Ruben Canedo of UC Berkeley and Tim Galarneau of UC Santa Cruz provided data and potential solutions to alleviate campus food insecurity.

Saifuddin said she felt it was inherently wrong for students to have to sacrifice their nutritional health to fund their education.

“I don’t think any student should ever have to make the decision between a textbook and a meal,” Saifuddin said. “I deeply believe that, and I know that you all agree with me.”

Saifuddin said before real progress could be made, the negative conceptions associated with student poverty need to be addressed.

“The first thing to do is eradicate the stigma around poverty and homelessness, because there are students who feel as if they belong at the UC regardless of where they come from or what challenges they face in life,” Saifuddin said.

“We are already working on having conversations about expanding the office of attendance data collection and repackaging financial aid to prioritize student’s basic needs, which include housing and food security.”

Data collected by the subcommittee found that, on average, UC students spend $9.42 on food each day.

UC President Janet Napolitano said steps were being taken to increase student access to adequate nutrition across the UC system.

“Right now, each campus is in the process of establishing a food security working group,” Napolitano said. “The goal is to support food security and access efforts for UC students throughout the university.”

I don’t think any student should ever have to make the decision between a textbook and a meal. I deeply believe that, and I know that you all agree with me. – Sadia Saifuddin

In a separate interview, UC Regent and UCSB alumnus George Kieffer said a decline in funds from the state has exacerbated food insecurity on UC campuses.

“Definitely, I think it’s an issue we’ve got to tackle,” Kieffer said. “But I think that it also suggests the withdraw of the state from responsibility in these as well as other areas and, therefore, it falls to us.”

UCSB Associated Students Food Bank Chair and fourth-year environmental studies major Katie Freeze spoke at public forum to emphasize the importance of providing food to as many students as possible.

According to Freeze, hunger reduces the ability of students to succeed, and the current situation is a “violation” of students’ basic rights.

“We feel it is a violation of these students’ human rights to have to sacrifice food for a quality education,” Freeze said. “Our students can only really live up to their full potential if they are nourished.”

Later in the meeting, Regent Russell Gould provided a brief update confirming the status of the May Revise to the tuition increase plan beginning in 2015-2016. Gould said tuition for resident undergraduates would be frozen for the next two years, but that “modest” tuition increases after that will be necessary. Meanwhile, tuition for out-of-state students will increase by eight percent annually.

It’s Not On Us, It’s On You campaign organizers Alejandra Melgoza, Lexi Weyrick and Melissa Vasquez, who led a sit-in of Chancellor Henry T. Yang’s office last Wednesday to demand specific policies for improved handling of sexual assault cases, had initially planned to speak in public forum at Thursday’s meeting. They were, however, unable to attend due to the cancellation of three flights departing from Santa Barbara Airport to San Francisco International Airport.