The Daily Nexus
News
UCSB Professors Discuss Historical View on ISIL
May 21, 2015 at 5:02 am by Christopher Chen 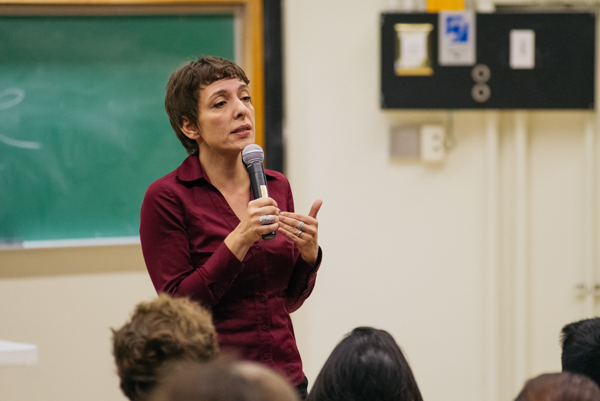 UCSB history professors Sherene Seikaly and Adam Sabra began the talk by discussing the Islamic State from its historical origins. Seikaly described what ISIL is, what they stand for, how the group came to be and the violence they have committed. Sabra discussed sectarianism, the Arab Spring and compared ISIL to the terrorist group Al-Qaeda.

According to Seikaly, the terrorist group was influenced by Saddam Hussein’s authoritarian regime and developed after the United States’ invasion of Iraq. Seikaly said ISIL was not a direct result of Islamic or religious “essentialism.”

“What I think is important about looking at the history of Arab authoritarianism in Iraq and in Syria and the role of U.S. intervention is understanding that ISIS is a product of historical context,” Seikaly said.

Sabra said the reason for ISIL’s success in recruiting diverse followers, such as doctors and other professionals from around the world, is that the group claims to be the Islamic government left after Muhammed’s death, or the caliphate.

“A significant number of people have come, for example, from Europe,” Sabra said. “There have been others who’ve come from other parts of the Arab world — Tunisia has a particularly large contingent. We don’t really know how many more people may be attracted to this movement in the long run.”

According to Sabra, ISIL recruits people by posting videos about celebration and triumph in addition to their violent footage of executions.

“ISIS has done a very good job of recruiting people with their slick videos — not all their videos are about violence,” Sabra said. “After they took Mosul, they had all these videos about celebration and their great victory.”

Seikaly said although ISIL pledged allegiance to Al-Qaeda, the group is more than an offshoot of the militant organization: It actively looks to govern and adjudicate a community and aspires to build a state.

According to Sabra, people draw false conclusions and fail to understand how ISIL developed, which leads to difficulty when attempting to solve the political problems in the Middle East.

“If you know the history, it’s much easier to understand how this has happened, and to also assess the future possibilities for continuing expansion or perhaps ending this movement eventually,” Sabra said.

UCSB History Club president and fourth-year history of public policy major Darren Chen said people should strive to understand the historical background of the terrorist group and understand ISIL from a different perspective.

A version of this story appeared on page 3 of Thursday, May 21, 2015’s print edition of the Daily Nexus.

Another day another excuse for Islam. This is getting tiresome.

Islam is ISIS and ISIS is Islam.

Al Qaeda is Islam.
Taliban is Islam.
Boko Haram is Islam.
Mohammed and his followers, murderers all, are Islam.

See how much sense that makes?

If you mean I’m correct that Arafat’s logic is ridiculous, which, considering your thermonuclear war bullshit, probably isn’t the case, then good.

If you mean that Christianty = KKK, then you’re just as ignorant as Arafat.

A major founder of ISIL was a former high ranking officer in Saddam’s Baathist party, an extreme branch of Sunni Islam. The civil wars between Sunnis, Kurds, and Shia have existed in Iraq for thousands of years, they all want to rule the country. The best course for the U.S. is to let them battle each other. Our original excuse for invading IRAQ was, publicly, “Saddam’s use of weapons of mass destruction”, specifically chemical weapons such as Chlorine gas – which was proven beyond doubt. Congress was told by the CIA, etc., that he still possessed chemical weapons, but by… Read more »

b
Reply to  Kareem

Wait, we should stop war crimes by committing war crimes?