The Daily Nexus
News
Scientists Debate Harms and Benefits of GMOs
May 21, 2015 at 5:01 am by Kendra Witt 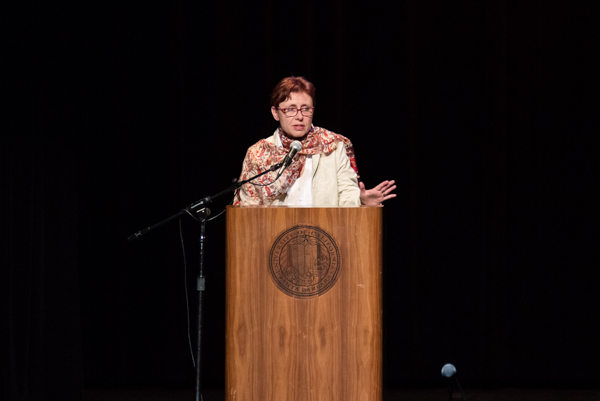 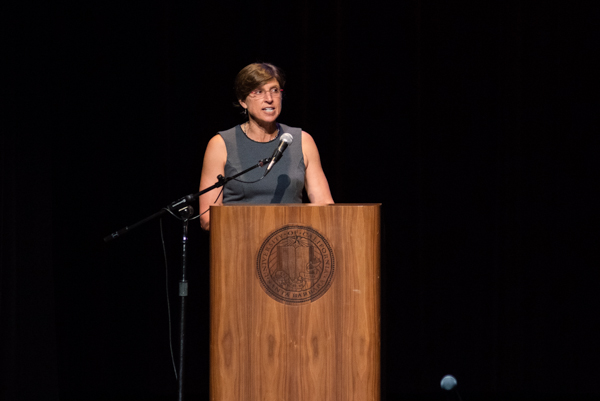 UCSB Arts & Lectures and the Interdisciplinary Humanities Center (IHC) co-hosted a debate titled “The 2015 Arthur N. Rupe Debate: The Use of Genetically Modified Organisms in Food” at Campbell Hall Wednesday night to deliberate the harms and benefits of genetically modified organisms (GMOs).

GMOs are living organisms whose genetic codes have been artificially manipulated through the use of various genetic engineering techniques. UC Davis plant pathology professor Pamela C. Ronald and Swiss Federal University senior scientific researcher in the Institute of Integrative Biology Angelika Hilbeck debated on whether the use of GMOs in food is safe, and the role GMOs play in world hunger and poverty. The Chronicle of Higher Education senior reporter Paul Voosen moderated the debate.

IHC director and German and Slavic studies professor Susan Derwin said the use of GMOs exemplifies the idea of “Anthropocene,” or human influence on the planet.

“Humans now have the ability to manipulate nature in radical ways and for their own ends,” Derwin said. “In the epic of the Anthropocene, as weather becomes more extreme and as the global population grows, the manipulation of nature promises to increase crop yields and diversify the places where food can be grown.”

“After forty years of commercial use in medicine, cheeses, wine and plants, there has not been a single instance of harm to human health or the environment,” Ronald said. “Instead of worrying about the genes that are in our food … we must ask if farmers and rural communities can thrive and be sure that everyone can afford the food.”

Ronald said the public’s fear of genetic engineering is due to misinformation, and is a major obstacle in distributing golden rice to rural communities.

“500,000 children go blind every year because of lack of vitamin A,” Ronald said. “Half of these children will die. We have a lot of fear mongering and what really distresses me is that it is preventing this rice from reaching the children. It’s something we take for granted every day.”

According to Hilbeck, hunger and vitamin A deficiency in developing countries are part of a much larger issue that genetic engineering alone cannot fix.

“The kids die because they are poor. We have to address causes of hunger and poverty,” Hilbeck said. “If you don’t address the underlying causes for hunger and poverty, singling out an individual issue will not help. We are helping those kids already by giving them vitamin A pills right now.”

Hilbeck said the best solution to ending world hunger and poverty is a system that can sustain itself for a long period of time.

“We need the best solution, the most sustainable solution — not focus on which technology that is — I personally don’t care what technology that is,” Hilbeck said. “I want the problem to be solved, but in a system that in itself functions and works so we can have it run for hundreds of years.”

According to Hilbeck, debating over GMOs lead to discussions about greater topics such as industrialized agricultures and the dangers associated with it.

“It’s about much more than GMOs,” Hilbeck said. “They stand in for a system that requires change and if that’s what it takes — GMOs — then that’s what it is. They trigger this debate. As long as we keep arguing, and we keep talking respectfully to each other, listening to each other and try to accommodate, we can move this place forward and progress.”

A version of this story appeared on page 4 of May 21, 2015’s print edition of the Daily Nexus.