The Daily Nexus
Science & Tech
Memristor Technology Brings Us One Step Closer to a Robotic World
May 21, 2015 at 6:00 am by Karla Bernardo 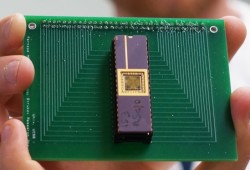 A model of the artifical neural circuit composed of memristor-based technology and based on the complex synaptic circuitry of our brains for image classification.

The dawn of free-thinking robots may soon be upon us. Researchers at UC Santa Barbara and Stony Brook University have developed an artificial neural circuit that emulates the electrical design of the brain’s synapses when classifying images.

Because of the extreme complexity of the human brain, development of hardware that mimics neural networks has remained a challenge to many electrical and computer engineers. The human cerebral cortex has approximately 1014 synapses for electrical communication between neurons. Despite significant advances in technology, the brain can perform certain tasks more quickly and efficiently than modern day computers.

The artificial neural circuit, implemented by Mirko Prezioso, lead researcher and a postdoctoral scholar in the UCSB dept. of electrical and computer engineering, along with his fellow colleagues, classifies the letters “Z,” “V” and “N” regardless of font style or additional noise in images. The circuit recognizes these particular letters in the same way our brain would fire electrical signals as it is making split-second decisions to classify images, such as picking out a certain shape from a group of different shapes.

The circuit, composed entirely of memristors, is relatively small compared to most networks, but the potential for this technology in medical and electrical applications is already apparent in current memory storage research. These memristors — a portmanteau of the words “memory” and “resistor” — function like the brain’s neurons, using ionic movement rather than electron diffusion to generate electrical signals.

“There will always be a limit to efficient brain-like computation for classical computers,” Prezioso said. “Memristor-based technology relies on a completely different way inspired by biological brain to carry on computation.”

Unlike the commonly used transistor, a semiconductor device used to amplify and switch electronic signals and electrical power, the memristor utilizes multiple-level coding rather than binary coding so that its resistance changes depending on ionic concentration and the direction of electrical current flowing through the device. Ions are notably heavier than electrons and cannot travel through the device’s semiconducting material as easily, allowing the researchers to scale memristors more intensely without losing the system’s analog properties. The memristor then stores different ionic concentration profiles in its memory, which proves to be a more effective method for artificial neural network development than digital memory.

Dmitri Strukov, a professor in the UCSB dept. of electrical and computer engineering and principal investigator of the lab in which Prezioso conducts his work, focuses his research interests in developing novel ways to perform computation, one of which involves use of memristors rather than digital transistors to develop high-performance computers.

“[My research group’s] current focus is on the memristive effect in metal oxide thin-film devices and its applications in computing,” Strukov said.

“It is not difficult to imagine this technology integrated into common processing units and giving a serious boost to future computers,” Prezioso said.

The more memristors that are utilized to build even more complex neural networks, the closer researchers are to creating a computer that exhibits the functionality of the brain with minimal expended energy and time. This discovery marks a huge step in the study of artificial intelligence.

The complete theory of first, second, third, etc memristor (first order memristor is the genuine one discovered by Professor Leon O. Chua in 1971), along with that of memcapacitors and meminductors is now already completed in an article I wrote with professor Chua in International Journal of Bifurcation and Chaos in September 2014. This paper can be freely download at:

An extension of the old Ohm’s law, fitted to those memory elements is given.