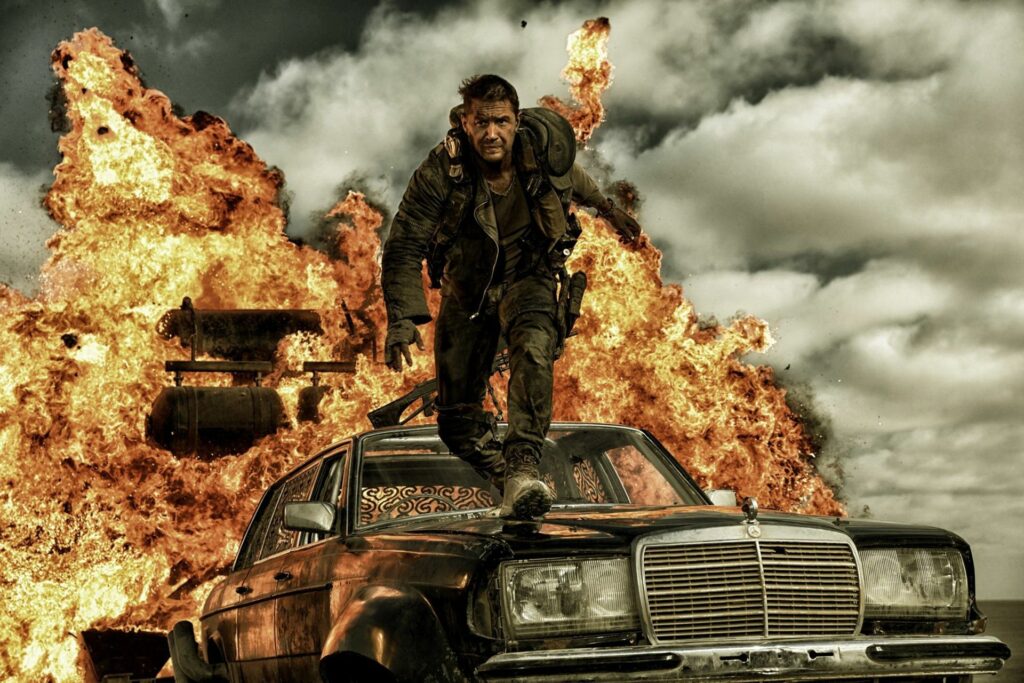 The thing about car chases is that they’re a common staple of action movies and it’s very difficult to make them seem fresh and new. George Miller’s fourth “Mad Max” movie doesn’t only breathe new life back into this common trope — it forces an air hose into its mouth and nose, turns up the air to 11 and screams in its face. The movie is insanity, although many are comparing it to a B-movie, which is certainly understandable. It’s very unlikely that people would look, act and dress like this movie’s characters in an actual post-apocalyptic world, but, then again, the post-apocalypse would be downright boring otherwise.

Like its famed predecessor, “The Road Warrior,” “Mad Max: Fury Road” is set in a post-apocalyptic Australia, where roving gangs of insane bandits terrorize the outback and tend to follow large, masked warlords. This time, though, former cop Max Rockatansky (Tom Hardy) plays second fiddle to Imperator Furiosa (Charlize Theron), a high-ranking goon of Darth Vader-wannabe Immortan Joe (Hugh Keays-Byrne, the original “Mad Max” villain, Toecutter). When Furiosa takes Joe’s “wives,” five women who are used as breeding stock in the hopes of reaching a safe haven, he takes off in pursuit with an entire armada of mutant death-mobiles at his back.

The reason why this movie has received acclaim from both critics and diehard “Mad Max” fans is that it’s a return to the good ol’ action formula. Virtually everything that happens on screen is real; the only thing in the film that is very obviously computer-generated is the gargantuan, tornado-spewing haboob that Furiosa drives into. Real cars flip in midair and explode, half-naked men in masks hang precariously from tilting poles attached to their vehicles and ghillie-suit-wearing motorcyclists throw firebombs while flying in midair. It’s an orgy of clashing metal and bullets that absolutely oozes badassery. Anyone who plans to watch this online: first of all, that’s illegal, you naughty thing. Secondly, you’d be doing yourself a massive disservice to not see this on a big screen with surround sound.

But one does not simply review this movie without praising Furiosa. First of all, what an amazing name, just say it out loud: Imperator Furiosa. Wooh. Love it. Deadly both behind and off the wheel of her massive War Rig, Furiosa is the standout character, a woman trying to find redemption for her past sins and kicking an immeasurable amount of ass along the way, too. Theron perfectly pulled off the grit required by such a character. Many are calling her the next Amanda Ripley, and I can definitely see that. Now we all just have to hope this movie is just as, if not more popular than, “Aliens.”

There has also been some debate about whether or not “Fury Road” is a feminist movie. That label may mean different things to people (especially to an online group of hilariously paranoid men’s rights “activists” who are calling for this movie to be boycotted), but I can reassure everyone that the female characters in the movie are all well-written. Some may think this is irrelevant in this day and age, but after watching a particular scene from “Age of Ultron” with Black Widow that made me want to bang my head against a wall, I am hopeful that “Fury Road” is a sign that male writers are taking more care in portraying women in film. We need more rifle-wielding biker-grannies anyways.

If this review hasn’t convinced you of how pants-wettingly awesome this movie is, query me this: Why on Earth would you not want to watch a movie where there’s a masked man rocking out on a fire-spitting electric guitar while strapped to a moving wall of speakers?

Bear in mind, Alex Wehrung is not easily impressed.