The Daily Nexus
Sports
UCSB Replaces Decorated Seniors With Two Recruits
May 21, 2015 at 5:05 am by Mark Salay 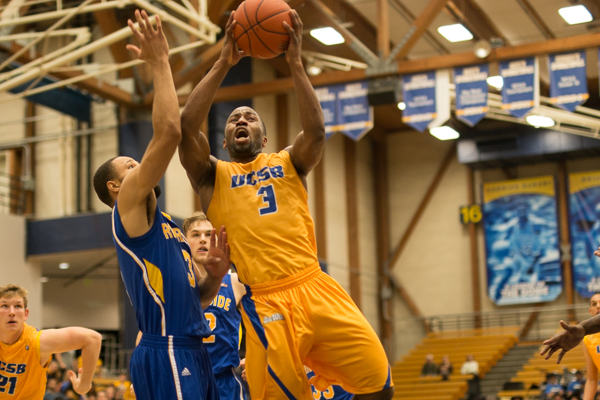 UCSB men’s basketball says goodbye to two starting seniors, including the program’s all-time leader in rebounds, but its two incoming recruits have potential to contribute right away.

“They both are guys that have the ability to help us immediately,” Head Coach Bob Williams said of his recruiting class.

With the departure of point guard Zalmico Harmon comes incoming freshman Grant Troutt from Episcopal School of Dallas. Like Harmon, Troutt is a floor general that can pass and is strong, listed at 6’2”, 185 lbs.

His 12 point, five assist, two rebound average in his junior year earned him a spot on with the Gauchos, but it was in the AAU circuit as the Texas Titans starting point guard that impressed scouts, including a career-high 34-point game.

“Grant is unfazed in the game. When I watched him in AAU he played against the best guards in the country,” Coach Williams said. “He gets it up, gets it to the right guy, plays physical. I think he’s going to be a very solid D-I player.”

Last year the Gauchos had a rotation of three point guards, often playing two for durations of games. Coach Williams plans to experiment with four point guards in the upcoming season, with sophomore Eric Childress and junior T.J. Taylor competing for the starting position again. Taylor needs to improve defensively to rank ahead of Childress, however.

Added to the mix will be junior guard DaJuan Smith, who might transition from shooting guard to the one, and who provides a better rebounding presence and gets to the rim more. Troutt will most likely backup the trio if not redshirted.

Jarriesse Blackmon, Utah’s Player of the Year, is Santa Barbara’s next recruit. The 6’6”, 210 lb. combo forward from Layton High School is a player that brings tenacity when it comes to rebounding and length his wingspan is almost seven feet.

He led his team to the state championship tournament and averaged 16.7 points, 10.7 rebounds, 2.1 assists, 2.0 blocks and 2.0 steals per game his junior year.

Blackmon also has potential to come in and have an impact, but with All-Big West First Team selection, junior Michael Bryson, and junior John Green ahead of him, Blackmon sits in a similar predicament as Troutt.

“Our thing is to evaluate whether or not [Troutt and Blackmon are] in the top eight or nine, or is it better off to redshirt them,” Coach Williams said.

Like last year’s recruiting class, Troutt and Blackmon will most likely get their big shot in their second season. In fact, of the three scholarship players from last year’s class, only freshman guard Gabe Vincent earned a spot on the roster while forward Ami Lakoju and guard/forward Justin Burks redshirted.

Lakoju collapsed during practice before UCSB’s game against Oregon in December. The Gauchos shut him down for the season. Coach Williams is pleased with his progress, noting Lakoju is in better shape and his time off helped him improve his shot.

Lakoju at 6’8”, 265 lbs. was seen as the natural successor of UCSB’s star big man, senior Alan “Big Al” Williams. Although not expected to fill up the stat sheet anywhere close as Big Al, Lakoju needs to rebound and defend to make a significant impact on the team.

Burks is another versatile scorer that was forced to sit out. At 6’6” he’s a wing player that can knock down the three-point shot and drive to the basket.

“We need Ami and [Burks] to fit into the rotation because when we graduate six next year you don’t want to have one player coming back,” Coach Williams said. “You want four coming back.”

Although only losing two players, the shoes will be huge to fill. Harmon, a two-year starter, quickly gelled with the team after transferring from Ventura Community College. While with the Gauchos he earned a spot on the All-Big West team as an Honorable Mention.

During his last season, he eclipsed Eric McArthur’s mark for most rebounds in programs history. He finished his collegiate career with 1,125 rebounds, 216 blocks (second all-time in program history) and 1,732 points (third all-time).

This season he averaged 17.3 points per game and 11.8 rebounds per game en route to his third selection on the First Team All-Big West team. Santa Barbara’s offense will change without Big Al; the game will open up considering there won’t be a constant need to feed him the ball on possessions.

“We’ll be all right. We went 5-2 without [Big Al] last year,” Coach Williams said. “That bodes pretty well for what this team should be able to do next year.”

A version of this article appeared on page 9 of May 21, 2015’s print edition of the Daily Nexus.