The Daily Nexus
Sports
Gauchos Head to UCR for Final Conference Series
May 21, 2015 at 5:04 am by Sarah Stigers 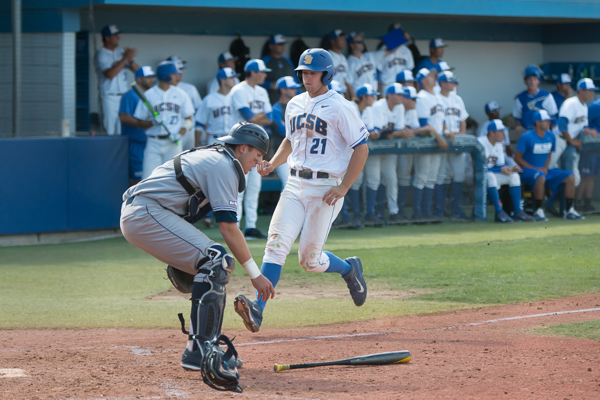 With a sweep over UC Irvine last weekend, the No. 7 UCSB baseball team prepares for its final conference series of the season against UC Riverside. The Gauchos will travel to Riverside today for a 6:00 p.m. game before playing their final games over the next two days.

Showing up big on the offensive side for the Gauchos against Irvine was senior outfielder Cameron Newell, who recorded at least two hits in two of the weekend’s three-game series against the Anteaters.

In Friday’s game, Newell was responsible for two of the team’s 10 total RBIs. Newell currently leads the Big West in overall batting average as he hits for .383 going into this weekend.  Senior catcher Campbell Wear also stepped up for the Gauchos at the plate last weekend, recording two doubles.

Another consistent hitter for UCSB has proven to be senior third baseman Peter Maris, who puts up the 14th-best batting average in the conference, hitting at a .308 clip with 21 RBIs and two homeruns on the season.

The UCSB offense collectively leads the Big West with an overall batting average of .290. Riverside comes in hitting at a .264 clip.

The UCSB lineup has put up 16 homers this season compared to 20 for Riverside.

Defensively, the UCSB pitching staff continues to put up big numbers, as all of the team’s starting pitchers have ERAs that appear in the top 12 of the Big West going into this weekend.

Junior right-handed pitcher Dillon Tate, who has topped Big West leaderboards all season, now has a conference-leading eight wins and a 2.08 ERA, good for fifth best. Tate has also logged 100 strikeouts, the second most thrown in the conference this season.

Riverside is bringing the No. 25-27 best ERAs in the conference to the mound this weekend, led by senior pitcher Joie Dunyon’s 4.85 ERA.

The Highlanders also bring the Big West’s 10th-ranked batting average to the plate against UCSB’s decorated pitching staff. Sophomore outfielder Vince Fernandez has hit six home runs this season and racks a .318 batting average. Another big hitter for Riverside has been senior infielder Joe Chaves, who holds a .307 batting average with 14 RBIs.

Following this weekend, the final conference seeding will be decided and postseason game times and locations will be announced. Fullerton currently holds the conference’s top spot. Irvine and Cal Poly come in tied with a 13-8 conference record for the third spot behind the Gauchos.

The Highlanders and the Gauchos will face off this weekend in Riverside for both team’s last conference series of the 2015 season. The series begins with 6 p.m. games today and tomorrow and will conclude with a 1:00 p.m. game on Saturday.

A version of this article appeared on page 10 of May 21, 2015’s print edition of the Daily Nexus.