The Daily Nexus
News
Record-Breaking Mountaineer Speaks at Campbell
May 20, 2015 at 9:01 am by Carissa Quiambao 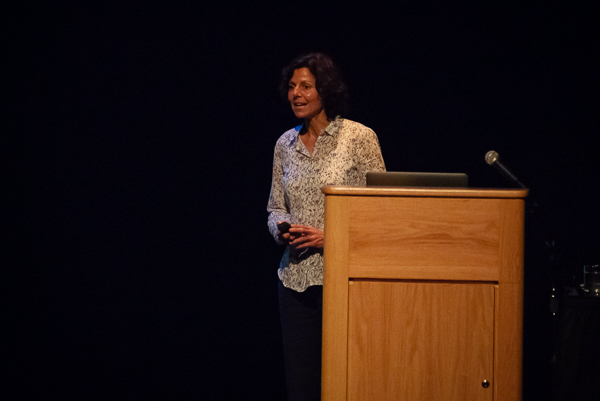 Austrian mountaineer Gerlinde Kaltenbrunner, the world’s first woman to climb all fourteen 8,000 meter mountain peaks without the use of supplementary oxygen, spoke at Campbell Hall Tuesday night about her 8,611 meter trek up K2, the second highest mountain in the world.

A skiing, ice climbing and mountaineering enthusiast from the age of 13, Kaltenbrunner used her money working as an oncology nurse to fund her climbing expeditions until climbing the Nanga Parbat in 2003 and finally deciding to mountain climb professionally. As the last leg of Arts & Lecture’s “National Geographic Live” series, Kaltenbrunner’s lecture was accompanied by photography and video to supplement her narrative recounting of trekking up her last 8,000 meter mountain peak: K2.

Prior to reaching K2’s summit in 2011, Kaltenbrunner had attempted to climb the mountain’s peak six previous times.

“Six times I had to turn back just before reaching the highest point. Despite those six returns, K2 still resided in my heart,” Kaltenbrunner said.

For her seventh attempt up the world’s second largest mountain, Kaltenbrunner decided she would bypass the conventional route up the south side of the mountain from Pakistan via the Cesen Route, and would instead go up the North Pillar from China.

“I had decided for the very unconventional way,” Kaltenbrunner said. “I chose a very difficult route on K2— the North Pillar, a very, very beautiful plane up to the highest point. This is a very challenging way up.”

During her lecture, Kaltenbrunner detailed the process by which her team — comprised of herself and four men — travelled to the base of K2 from China by crossing the hazardous Shanksgam River on camelback, then proceeded to spend 80 days setting up base, acclimating their bodies to the extremely high altitudes and climbing up the icy, windy, subzero mountainside.

“[At times] it was far too cold. We couldn’t feel our fingers anymore … It was so difficult for us to stay whole nights in the tiny tent. It was hard to go out,” Kaltenbrunner said. “But when I did go out it was just amazing. We had such beautiful nights, very clear nights full of stars. As you can imagine, up there, there is no light pollution. Many times I could see, from the light of the stars, the shadow from my own body. It’s amazing up there.”

Kaltenbrunner said what she had felt after reaching K2’s peak and fulfilling one of her life-long dreams was indescribable.

“In order to successfully reach your goals, and it doesn’t matter which goals they are, you have to be enthusiastic,” Kaltenbrunner said. “Prepare yourself mentally for unforeseeable situations. Maintain calm and serenity in situations that seem to be hopeless … Never give up. Hope that everything will work out in the end. And most importantly, respect nature and follow your own path.”

Third-year political science major Cody Sturges said the most striking thing about Kaltenbrunner’s lecture were the images of her on the summit and the accounts of her 80-day climbing expedition.

“The sheer distance she put toward that goal and then finally accomplishing it, it’s really something special,” Stuges said. “The most important thing is to never give up. She kept pushing; she made it.”

According to Santa Barbara native and Ventura resident Joe Norris, Kaltenbrunner’s ability to fight through adversity and approach situations with meticulous preparation are principles that can be applied to everyday goals.

“Getting a degree or passing a test, setting your goals, being passionate about it — that’s what you can draw from every day experiences,” Norris said. “Just climbing the mountain of life.”