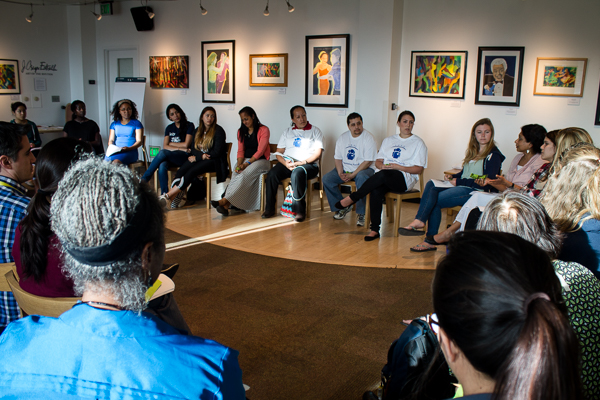 Attendees discussed issues of racism and sexism in Isla Vista, as well as the failure of university administration to act on these topics. Paris Cullen/Daily Nexus

The MultiCultural Center (MCC) and English professor Felice Blake hosted a remembrance event on Tuesday in the MCC to create a healing space for students, staff and faculty affected by the events of May 23, 2014.

Attendees discussed ways to combat racism and sexism in Isla Vista in context of the anniversary of the shooting. The event was facilitated by third-year film major Ashley Baker, who led group activities with Blake and encouraged participants to express their emotions and acknowledge words of healing such as “faith,” “hope” and “power,” as well as words that reflect wounds such as “fear,” “anger,” and “alone.” Blake focused on community building and different resources and systems of support for those who have gone through difficult experiences.

Even if we want to take up issues of race or sexuality, we realize that we don’t all experience these things in the same way.

According to Blake, increasing police presence and surveillance as a response to the events of May 23 last year has exacerbated the pre-existing tensions between students of color and law enforcement, specifically issues of profiling and biased arrests.

“Even while these students [of color] believe that safety is a pressing concern, we don’t automatically share the same ideas of safety and security and protection just because we happen to be affiliated with UCSB,” Blake said. “Even if we want to take up issues of race or sexuality, we realize that we don’t all experience these things in the same way.”

Associated Students Womyn’s Commission’s supporting chair and third-year comparative literature and global studies double major Cassie Rubio said administrators reacted to the events of May 23 last year incorrectly. According to Rubio, administrators increased policing while failing to address the roots of the problem, sexism and racism.

“The increased militant police presence that we now have … is really harmful to communities of color, women, other marginalized groups who have histories with police presence,” Rubio said. “What has not changed is the administration’s failure and blatant erasure of misogyny and racism and serious issues that we need to deal with on our campus. We need more healing spaces that are more focused and informed of these issues.”

Several attendees recounted their experiences entering the university last fall, expressing they expected an open and loving environment but were faced instead with sexism and racism. One attendee described UCSB’s environment as “disappointing” due to the prevalence of student-filed sexual assault cases.

Participants used the space to discuss their individual emotions about the events of May 23 last year, describe memories and offer advice for those experiencing post-traumatic stress disorder and other lasting effects.

Santa Barbara Response Network Operations team leader Anthony Rodriguez said students experiencing trauma should recognize there are others who care and many who feel the same way. According to Rodriguez, students have the ability to strengthen Isla Vista through unity.

“Know that you are not alone, whatever you are feeling — no one can change that,” Rodriguez said. “But there’s so much to do to empower your community. I.V. is not alone. You guys have heart and that’s a good thing.”

Director of the MCC Zaveeni Khan-Marcus said UCSB should increase representative conversations because, while the events of May 23 last year were shared experiences for the entire student body, they affect individuals differently.

“[We discussed] the sense of isolation and loneliness that impedes us from creating a community and trying to help each other,” Khan-Marcus said. “Of course everyone came together during the tragedy but two years from now, one will not have a common thread. And then how do we love?”

Know that you are not alone, whatever you are feeling — no one can change that.

Baker said she is pleased to see how rapidly the campus has grown in the past year.

“Just seeing the campus grow from last year to this year has been pretty phenomenal,” Baker said. “Of course it’s still going to have its cold spaces. I just see how precious life is and I don’t want to waste a minute of it. Even if it’s scary, I try to push myself to do things I don’t normally do.”