The Daily Nexus
Swim and Dive
Swim Excited to Bring In Talented Recruiting Class
May 19, 2015 at 4:55 am by Daniel Moebus-Bowles 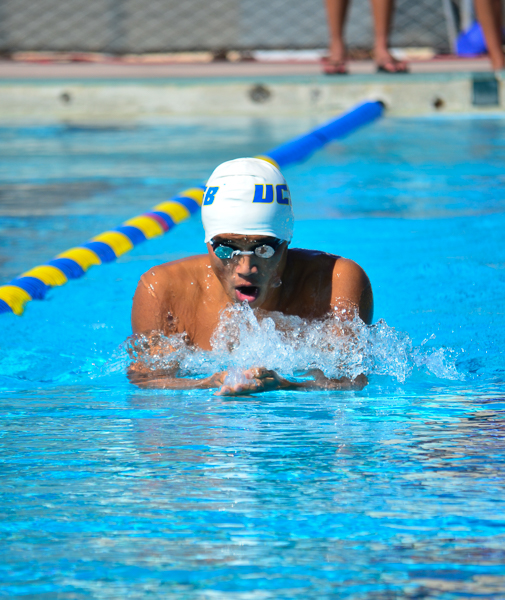 After a very successful season in the pool, the UCSB men’s and women’s swim teams are set to welcome 15 new Gauchos to the squad next fall.

“I am extremely excited,” Head Coach Gregg Wilson said. “This is the best recruiting class that we have had in my 39 years of coaching at this school.”

UCSB will be welcoming five new women and ten new men during this offseason. All ten men and three of the women will be coming in as freshman, while two women will be transfers.

On the men’s side Joe Kmak out of Palo Alto, CA will be joining the Gauchos next season. Kmak is the son of two former Gaucho athletes and has been signed since this fall with UCSB. According to College Swimming, Kmak is ranked 10th out of all California recruits and 100th in the country.

“Joe is a scholar athlete and he will be the best breaststroker in the country,” Wilson said. “We are extremely impressed with him and were happy to have him on.”

Logan Hotchkiss and Michael Wang from Southern California will be two more additions to the roster as well. These two rank 31st and 32nd respectively in the California recruit rankings and they will face each other in their final high school championships next week before becoming teammates in the fall.

Three athletes joining that have already been teammates for a while in the club-swimming scene are Eric VanBrocklin, Calvin Kirkpatrick, and Mason Tittle. The three swimmers come from Walnut Creek, CA and all rank in the top 50 of California recruits. Leading the way for them is Tittle at 21, while VanBrocklin and Kirkpatrick come in at 30 and 50 respectively.

“Tittle may be the best guy that we have coming in,” Wilson said. “By the end of this weekend he will be top ranked in both freestyle sprints and butterfly sprints. We are so happy to have him come to school here.”

On the women’s side UCSB will be bringing in transfer Kelsey Leonard, from Diablo Valley Junior College, Coach Wilson’s former school in Walnut Creek, CA. Leonard swam for the same club that the three men from Walnut did and in her time with DVJC, she was awarded Junior College Swimmer of the Year.

“Kelsey will be a huge help for our team,” Wilson said. “We can really use her at a lot of different spots in the meet, especially where we are struggling.”

Along with Leonard, the Gauchos will also bring aboard transfer Maelyn Adornetto, Lilly Helmuth-Malone, Rachel Kulik, and An Nguyen.

At this time in the high school season, many teams are making their way into the various tournaments and championship meets, meaning not all athletes have yet committed to a school. In reference to that notion, UCSB still has its sights set on a few more additions that cannot be named at this time. Final recruits will be solidified in the summer.

“This year is going to be great and a lot of fun for us coaches,” Wilson explained. “There’s going to be fireworks in the pool with the talent and strength that were bringing in. On top of that, they are all so academically inclined.”