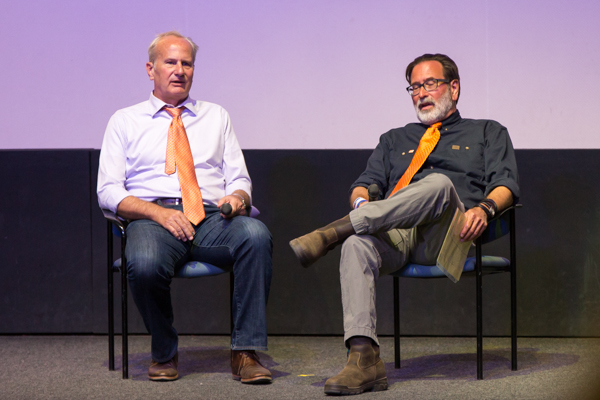 Fathers of two victims of the events of May 23 last year spoke at an event titled “Turning Tragedy into Activism: Why We Got Involved in the Gun Safety Movement – A Conversation with Richard Martinez and Bob Weiss” at Isla Vista Theater on Monday afternoon to advocate for gun control legislation across the United States.

Hosted by KCSB and Higher Education Action & Research Consortium (HEARC), the conversation was aired live on KCSB-FM 91.9. Richard Martinez, father of victim Christopher Michaels-Martinez, and Bob Weiss, father of victim Veronika Weiss, both spoke and held a Q&A session at the event to share their experiences since the events of May 23 last year.

Martinez said, as a member of pro-gun control organization Everytown for Gun Safety, he does not wish to ban guns, but rather to reduce gun-related violence and crime.

“I grew up with guns … Everytown and me personally, we’re not anti-guns, we’re anti-gun violence,” Martinez said. “I’m not out to ban guns from people who are responsible citizens. I want to make sure as much as possible that dangerous people don’t have guns.”

“The most effective thing we can do to end gun violence in this country is to have criminal background checks on all gun sales,” Martinez said. “We have criminal checks on gun sales in California, but we need to do better. We need to keep guns out of the hands of felons, domestic abusers and people who are seriously mentally ill.”

“In states that have criminal checks for gun sales, fewer women are killed with guns, fewer law enforcement officers are killed on duty and fewer people commit suicide,” Martinez said. “The I.V. shooter had a long history of serious mental illness. We need to improve our background check system to make sure that the information gets into the background check.”

Martinez said studies show while 1,171,177 Americans in total have died from the nation’s past wars, an even greater number of Americans have died due to gunfire, with 1,384,171 recorded between the years 1968 and 2012.

“PBS commentator Mark Shields made the following statement, ‘More Americans have been killed by gunfire since 1968 than in all the wars in the nation’s history,’ and he made the statement on December 2012,” Martinez said. 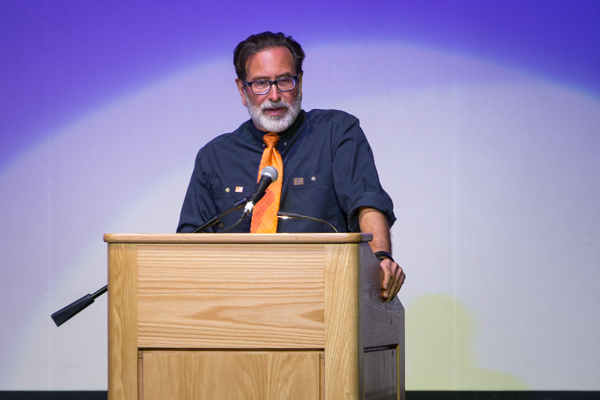 Richard Martinez shares his story about how gun violence has affected his life. Stephen Manga/Daily Nexus

Martinez said the Journal of Trauma and Acute Care Surgery stated in January 2011 that Americans, especially those between the ages of 15 and 24, are more likely to die from gunfire than those in any other developed country.

“If you’re an American between the ages 15 and 24, you’re 42 times more likely to be shot and killed than in any other developed country in the world,” Martinez said.

Martinez said it should not be the norm for elementary school students to have to undergo lockdown drills in preparation for potential shootings.

“In the ’50s and ’60s when I grew up in this country, no little kid ever thought about being shot and killed in an elementary school,” Martinez said. “Today we’ve come to accept it as normal — that we have lockdown drills in elementary schools. How has that become acceptable?”

Weiss said he will attend the UC Board of Regents meeting on May 20 at UC San Francisco to advocate for UC divestment from businesses that produce guns.

“On Thursday I will be at the Board of Regents meeting at UCSF presenting petitions from students about divestiture,” Weiss said. “University of California is invested in weapons manufacturing. They’re actually taking your money and investing it in companies that make guns. And when I heard about that, I had to get involved.”

Martinez said since the events of May 23 last year, he has helped pass “red flag legislation” which allows individuals to report cases if they feel threatened by someone near to them and potentially confiscate guns and other weapons from suspects if a judge agrees there may be danger.

“Red Flag Legislation allows immediate family members or law enforcement, if they believe that a loved one is a danger to themselves or others, they can go take that evidence before a judge and if the judge agrees, the judge can order that the person return any weapons they have and prohibit that person from buying more weapons,” Martinez said.

Martinez said he hopes to add a checklist in police reports to be completed by officers and deputies in the case of domestic violence or mental stability investigations, and to ensure officials inform those involved of the Red Flag Legislation.

“The domestic violence addendum to police reports is a checklist for officers to make sure they did everything in a domestic violence situation,” Martinez said. “I’ve talked to Sheriff Brown about doing a checklist about somebody’s mental stability, and one thing I’d like to have on the checklist is the red flag legislation.”

Weiss said Santa Barbara County Sheriff’s Department (SBCSD) should have performed a more thorough welfare check on the shooter on April 30, questioning whether he was in possession of guns.

“There’s a question in a threat assessment that should be on [Richard Martinez’s] checklist, and according to the FBI they are preventing mass shootings right now by always asking this question,” Weiss said. “This wasn’t asked of the Isla Vista monster; no one asked him if he had a gun. One thing police officers are trained in is having a sense of when someone’s lying to them.”

Martinez said some gun lobbyists believe a higher power and the second amendment under the Constitution, the right to keep and bear arms, warrant their desire to have a gun anywhere at any time.

“They feel the second amendment guarantees them the absolute right to carry a gun at any time and any place,” Martinez said. “Some say we have a God-given right. Although I’m not a biblical scholar but … I’m puzzled by that one.”

Martinez said the second amendment and other rights under the Constitution are not absolute, and there are certain exceptions to the right of possessing weapons.

“You don’t have absolute right of free speech, you can’t go onto a crowded movie theater and yell ‘fire,’ you can’t threaten to kill somebody,” Martinez said. “You don’t have the absolute right to practice religion — you can’t engage in human sacrifice. If we took the second amendment literally, it’s the right to keep and bear arms, each one of us would have the right to keep a tank in our backyard and nobody understands it in that way.” 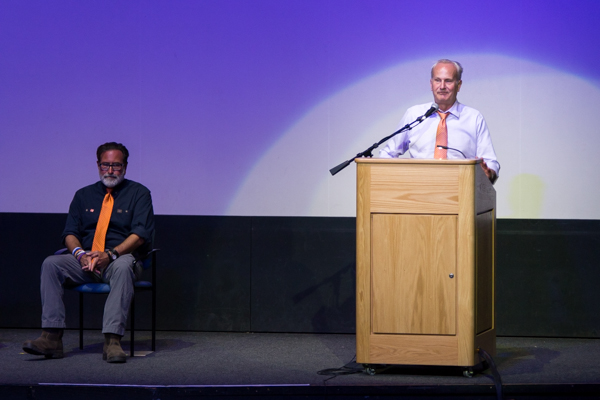 Weiss said he disagrees with gun lobbyists, and the second amendment is not necessarily applicable in modern-day as it was written at a time when newly independent American civilians required a way to defend themselves against the English.

“The gun lobbyist’s arguments are all bullshit,” Weiss said. “The second amendment — it was written to protect us from the British who were apt to invade our shores anytime because we didn’t have a proper army to take them on. It didn’t have anything to do with protecting yourself from robbers.”

Martinez said another stance taken by gun lobbyists is to solve gun violence by increasing the number of guns, which according to Martinez is an outdated resolution.

“The second argument that you hear is that the solution to gun violence in our country is more guns,” Martinez said. “That suggestion is a 1800’s solution to a 21st century problem. We can do better. What the heck are you supposed to do with a gun during Deltopia? It just doesn’t make sense.”

Weiss said while I.V. is seen as an “idyllic place,” there are several problems, including high crime, in the college town that must be addressed.

“It’s a beautiful place … everyone’s pretending, ‘Oh, it’s by the ocean and the sun shines and everybody’s happy,’” Weiss said. “Deltopia draws in thousands of high school and college kids. You can’t do that in most cities; you would get shut down a long time ago. This town is a big damn mess, it needs to be cleaned up.”

Second-year sociology major Adriana Marquez-Gallegos attended the talk and said she is in favor of gun safety laws and hopes to look into more legislations against gun violence.

“I thought it was really informative and it opened up my eyes to gun violence,” Marquez-Gallegos said. “It could have been any one of my friends or myself, and you just never know. I think I would look into gun laws we can pass and more voting.”

Second-year biology major Scotty O’Brien said he is concerned more gun safety laws will remove the weapons from the possession of responsible entities and contribute to a black market for guns to be accessed by dangerous individuals.

“While I believe that so-called common sense safety laws can make us less safe, I do recognize that the increased prevalence of firearms in the community results in more shootings,” O’Brien said. “More safety laws mean less people are able to purchase firearms through the legal market. The black market for guns is just like with drugs, just expands and expands and turns into a whole messy organized crime situation.”

O’Brien said, while decreasing the amount of guns could decrease gun-related issues, it may not contribute to lower violence overall because other types of weapons are available.

“More guns, same amount of violence, the violence won’t go away — it’s just a matter of how one chooses to defend or not defend themselves,” O’Brien said.

Martinez said UCSB students and the youth population in general should take a stance on gun violence and promote safety measures that will inevitably affect them.

“Don’t ever kid yourself that it can’t happen to you. When the I.V. shooter left his apartment, he went out to kill. He had over 600 rounds left,” Martinez said. “So, you have a choice, you can forget about it and go on and continue to enjoy your lives here and pretend it won’t happen again, or you can do something about it.”

While the grief of both of these fathers is understandable, it does not justify condemning all gun owners. And despite Martinez’s disclaimer, that’s what they do. Weiss appears to have nothing but contempt for gun owners (see his “bulls***” comment). Does he realize how sweeping this irresponsible talk is? It is an outright misrepresentation to claim that gun owners want “a tank in our backyard [sic]” and to say that Second Amendment supporters believe the right is absolute. Nor has that ever been the position of the NRA. For an alternative view of this problem, I refer readers to today’s… Read more »

I went to this event and it was a complete FARCE. There was no ‘conversation’, just an emotional tirade against Martinez’s and Weiss’ political enemies. Even the Q&A was completely rigged, as the lady from Everytown for Gun Safety completely ignored all question submissions that did not serve her agenda (receiving her paycheck from Michael Bloomberg). There were no microphones to ask questions, only pieces of paper to scribble down anonymous questions (even though there were less than three dozen people in the theater). I asked “how can we be confident that the real-world enforcement of so-called ‘common sense’ safety… Read more »

I have never lost a child to a gun crime and cannot imagine the grief the parents feel. However, I do not understand why they blame guns. There was a person behind the gun, and over the past ten years, almost every mass shooting has involved a shooter who was on psychotropic drugs. Why haven’t they gone after the drugs? Millions of people who own firearms in this country do not use them to kill people. They have them to prevent harm. I attended a lecture on the Armenian genocide. At the end, I asked the presentor if people in… Read more »