The Daily Nexus
Sports Blogs
Ducks Roll On, Rangers and Lightning Split at MSG
May 19, 2015 at 10:00 am by Jack Mathews 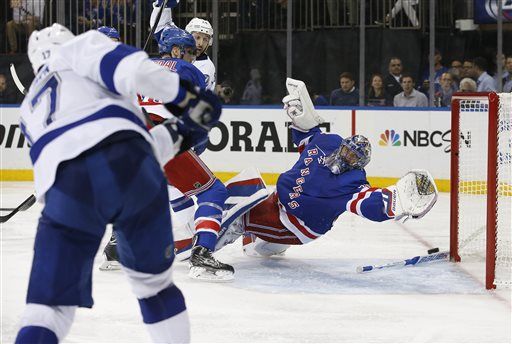 All of the hard work, the countless hours on the ice, the blocked shots and the necessary ice baths after the games have led to this. Four teams now remain to duke it out for a chance to win their conference finals and earn a berth into the Stanley Cup Finals. For some teams like Anaheim it was a smooth ride as they only lost one game on their road to the Western Conference Finals, while the New York Rangers had to battle back from a 3-1 series deficit to defeat the Capitals in overtime. Tampa Bay lost two straight games after taking a 3-0 series lead to Montreal, but then crushed the Canadien’s dreams in game six with a convincing 4-1 victory. Chicago continues to follow the blueprint that has won them two Stanley Cup’s since 2010 as Patrick Kane, Jonathan Toews, and Marian Hossa have been a three-headed monster who have used skill, speed, and experience to will Chicago to the conference finals.

Twenty-eight teams are currently sitting at home, watching in agony as they wait for next year, while the Blackhawks, Ducks, Rangers, and Lightning will spend the next two weeks giving everything they have in order to lift Lord Stanley’s Cup. Lets take a look at what to expect from both series. Recap:

New York Rangers vs. Tampa Bay Lightning (Tied 1-1)- If my readers did not know the dominance of Henrik Lundqvist before, they must know now as week after week his inspired play in between the pipes has willed the Rangers to a second consecutive berth in the Eastern Conference Finals. Lundqvist loves playing in game seven’s on May 13th as this year was the THIRD consecutive year in which the Rangers goaltender has made 35 saves in a game seven victory. That is just insane. Almost as insane as his 10-0 record and 0.87 goals against average in game seven. Tampa Bay has their hands full, but it seems to be nothing that Tyler Johnson and the Lightning cannot handle. Johnson netted a hat trick and the Lightning pounded the Rangers 6-2 to even up the series and gain some major momentum headed back to Tampa Bay for game three. Look for the Lightning to continue to harass the New York Rangers defense and the eleven goals in the postseason is the best in the NHL for Tyler Johnson and he has showed no signs of slowing down. I believe the biggest reason that Tampa Bay has become so dangerous is the recent emergence of Ben Bishop. He played amazing in game two and without some beautiful saves on the penalty kill, this game could have been much closer than the final score indicated. Overall, I believe the Rangers experience can carry them to the Stanley Cup, but it will be intriguing to see how Tampa Bay builds off of their convincing game two victory.

Anaheim Ducks vs. Chicago Blackhawks (1-0 Ducks)- Rest should not be a factor for either of these teams as they have lost a combined three games this postseason and have outmatched their opposition in a tough Western Conference. Bruce Boudreau praised the speed of the Blackhawks while Joel Quenneville expressed his concerns about the Ducks versatile defenseman. Sunday showed a display of speed, athleticism, and much more but Anaheim outplayed the Blackhawks for a majority of the game and cruised to a 4-1 victory. Frederik Andersen is beginning to play very confidently in net for the Ducks and if he can keep this play up, Anaheim will be nearly impossible to outlast in a seven game series. Corey Crawford remained inconsistent on the other end for Chicago as he allowed three goals and seemed uneasy in net all night long. Granted, the Ducks were peppering him all night but he will need to be better if the Blackhawks want to head back to the Stanley Cup finals. I believe that Chicago will come out inspired and energetic in game two; however, Anaheim is nearly unbeatable at home and are playing their best hockey of the season at the perfect time. Look for a physical affair, but I believe that Bruce Boudreau’s bunch will grind out another victory.