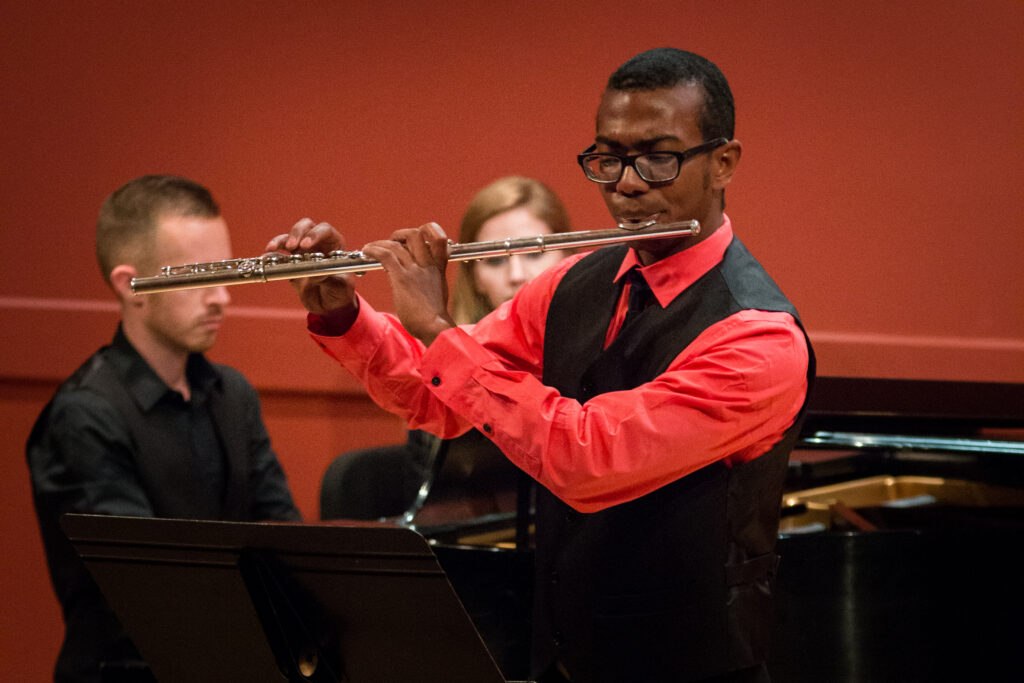 This afternoon, outside of Karl Geiringer Hall, a line of Azeem Ward fans snaked through the music building for the esteemed flautist’s senior recital. The hall overflowed, despite attendance being only a fraction of the 100,000 attendees who RSVP’d on Facebook. Staff took nearly half an hour to seat the guests until maximum capacity was reached.

Francis Keyshawn, who flew from Bristol, England, was originally on his way to L.A. on holiday and made a pit-stop to catch Ward’s recital during his stay in California. Keyshawn explained that making events go viral in Britain is a bit of a joke. “We never get to go to these events we invite each other to … My friend Alex posted ‘my man!’ [in the event] when it was only 90 people attending … I touched down in L.A. and it had exploded! Now it’s 100,000!”

Ward’s recital ran for one hour with only a brief intermission. Each recital section began with classical pieces that quickly turned to the more contemporary. The bright and lively rendition of Philippe Gaubert’s Sonata No. 3 kicked off the recital on a charming note. John Scoville accompanied on piano, with Ward barely able to keep his feet on the ground, rising to his toes with every climb in pitch or volume.

Ward’s back-up ensemble also had a hard time maintaining composure as the music gradually jazzed up. Percussionist Nick Diamantides and pianist Robert Johnson joined Ward for a snazzier-than-usual Azeem-version of a classical Johann Sebastian Bach piece. Bach Partita in A Minor gave a glimpse of Ward’s ear for fusing classical and modern. The recital frequently felt like a familiar jam. 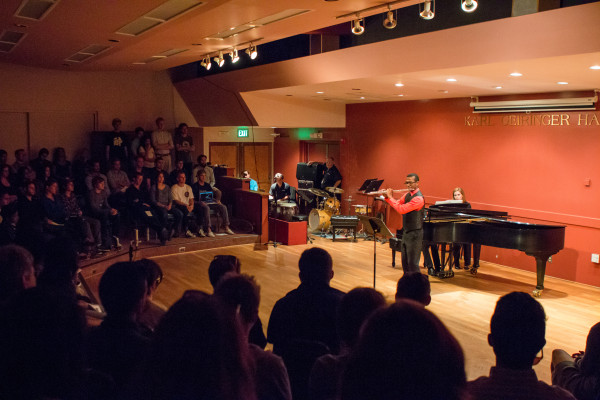 In the original composition One on One, Ward showed not just his talent for contemporary work, but also interdisciplinary collaboration. Dance students Andrea Rhoades and Kaydee Black performed a choreography by Christina McCarthy to add a visual layer to Ward’s music. Dressed in colorful costumes and wearing elaborate headpieces, Rhoades and Black danced on, below and around a red bench during Ward’s composition. A combination of powerful acrobatics and soft movement complimented the live music behind the dancers, showcasing the seamlessness with which the arts can combine.

After the intermission, the soon-to-be graduate performed Fançois Devienne’s Concerto No. 7 in E Minor, compelling the audience with its irresistible melody. Composed in 1787, this piece was the oldest piece played by Ward. Whereas Gaubert’s Sonata No. 3 exhibited continued cheerfulness and thrill, Devienne’s concerto featured a more familiar pattern of quick beginnings and ends, punctuated by whimsical adagio.

This tradition stood in stark contrast in the final act — Three Beats for Beatbox Flute, composed by Greg Pattillo in 2011. Ward returned to the stage hidden behind sunglasses and fashioned in a slick black hat in addition to his formal attire. Ward played a melody while simultaneously beatboxing. Audience members couldn’t resist the temptation of nodding, foot-tapping and general grooving, despite being confined to seats. This conclusion demonstrated the compatibility of classical instruments in the fast-paced world of modern music.

Ricardo Valenzuela-Morin, a first-year chemistry major, was so excited for Ward’s recital that he spent Friday night in Geiringer Hall. Morin played flute for three years himself, as well as guitar, and had a significant musical background prior to experiencing Ward’s music. When asked if the recital was worth his efforts, Valenzuela-Morin responded with an enthusiastic yes. “My favorite part had to have been the cooperation between the differing music styles and even [with] the dance! It brought an exciting aspect to the performance, and the [styles] were so synergistic.”