The Daily Nexus
Science & Tech
Project 8 Scientists Detect Frequency of Radiation for Individual Electron
May 14, 2015 at 6:00 am by Karla Bernardo 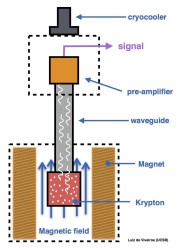 Schematic of CRES apparatus, which uses cyclotron motion in a magnetic field to measure the frequency of radiation of an individual electron.

A team of 27 scientists from six American and German institutions has, for the first time, achieved the task of detecting the frequency of radiation of a lone, orbiting electron. The group’s research, known informally as Project 8, can be seen in the April 2015 edition of Physical Review Letters.

“Nobody has ever been able to zoom in on a single electron before,” Benjamin Monreal, assistant professor in UC Santa Barbara’s Dept. of Physics and member of Project 8, said. “We were able to take a single electron and see it scatter 20 times and measure every little energy change.”

According to Benjamin LaRoque, a graduate student researcher in Monreal’s particle astrophysics laboratory, the basis of Project 8 is quantifying the specific type of radiation that an orbiting electron emits.

Cyclotron Radiation Emission Spectroscopy (CRES) measures the energy distribution of electrons emitted from tritium beta decay with more accuracy than any other previously acclaimed spectroscopy technique. The scientists created an apparatus filled with a small amount of radioactive krypton (Kr-83) that traps the electrons produced from the beta decay of the radioactive isotope’s nuclei. The electrons undergo cyclotron motion in a magnetic field and the electromagnetic radiation generated is delivered to low-noise amplifiers. Once the signal is amplified, the researchers can process it and reconstruct the electron’s energy based on the frequency of radiation. 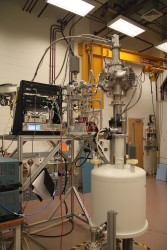 “The most important aspects of the detector that allowed us to make this measurement are the waveguide design, which captured the radiation very efficiently and increased our signal rate, and the low-noise amplifiers, which increased the signal power without adding much noise,” Luiz de Viveiros, a postdoctoral scholar in Monreal’s lab, said.

Kr-83 produces an energy close to that of a radioisotope of hydrogen, tritium or hydrogen-3, which emits an electron, a helium-3 nucleus and a neutrino when it decays. With the ability to capture single electrons, CRES has the potential to be the first method to directly measure the mass of neutrinos, neutrally charged subatomic particles that result from radioactive decay. Neutrinos exist in three different forms — electron, muon and tau — each with a unique mass, which is yet to be calculated.

“In addition to moving to tritium, an eventual neutrino mass experiment will have to be physically much larger to allow for a larger source and will require improved resolution over what we’ve shown with this prototype,” LaRoque said.