The Daily Nexus
Track and Field
Battle-Tested Gauchos Prepare For Big West Championships Championships
May 14, 2015 at 5:03 am by Elliot Thornton 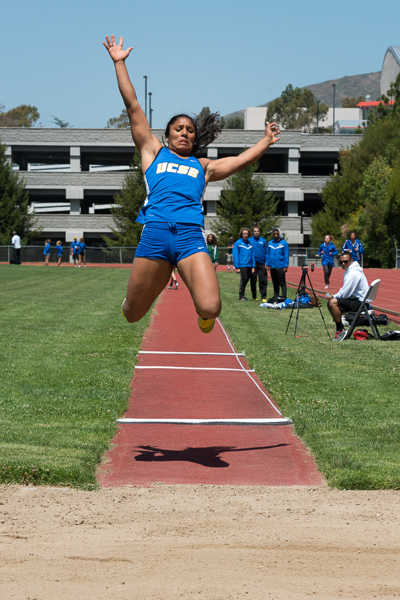 It has all come down to this moment. The UCSB track and field team prepares for its biggest meet of the season as it heads to UC Riverside for the Big West Championship. Action will begin Friday and roll all the way through Saturday afternoon.

Following last week’s valiant effort by the decathletes in the Big West Combined Events Championship, the Gauchos head into their last conference matchup with a boost of confidence and momentum.

The decathletes racked up 20 points for the team in their meet last Saturday. Sophomore Darion Williams recorded a new personal best in the 100m, 110m hurdles and the long jump. Senior Billy Britt also set the tone taking first place in the 1,500m with a time of 4:41.83.

Because it is their final conference meet of the year, seniors Bryce Rausa, Thomas Gore-Schreck and Albert Hughes look to embrace the moment and take advantage of the opportunity.

“The point of everything that we’ve done is for this upcoming meet. Summer, fall, winter, up until spring, has all led up to this point,” Hughes said. “We’ve tried to set our peaking time for this moment … What we’re trying to do is eat well, sleep well and make our bodies physically and mentally ready to compete.”

This weekend will be no easy task for UCSB. The Big West is stacked with some talented competition the Gauchos have faced throughout the year. Some familiar faces include Cal Poly’s Ricky Strehlow, Long Beach State’s Cameron Pizzica and Cal Poly’s Teddy Scranton.

UCSB has been on a roll towards the second half of the season, specifically pinpointing it back to their performances at the Mt. SAC relays and the Bryan Clay Invitational.

“I think what’s going on is that our hard work is paying off,” said Hughes. “At the beginning of the season, we had our jitters, but once we got normalized to it, we were ready to compete and were not afraid of these guys, because we’ve been against them before. It’s nothing new to us.”

Hughes added there are a couple of things he wants the younger athletes to take to heart prior to this important meet.

“Be confident in yourself. We have done the preparation, but I think the last key component is the aspect to it,” Hughes said. “If you continue to stay confident in what you do you will be a lot more responsive. You’re going to hit your positions and have the will to beat your opponent.”

A version of this article appeared on page 11 of May 14, 2015’s print edition of the Daily Nexus.