The Daily Nexus
Sports
Gauchos Set for Rematch Against CSU Bakersfield
May 12, 2015 at 5:03 am by Sarah Stigers 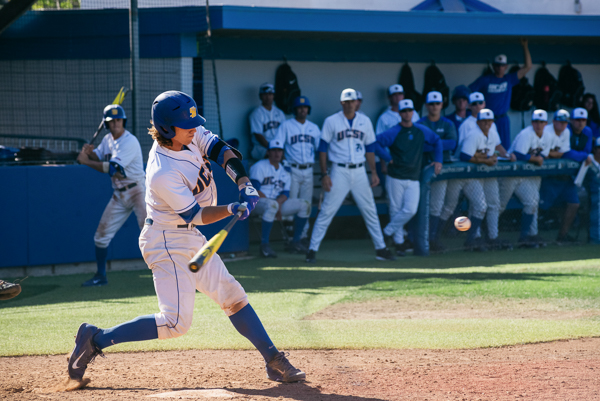 The No. 8 UCSB baseball team will suit up this afternoon in a rematch with Cal State Bakersfield on the road after losing to the Roadrunners just last Tuesday.

The Gauchos are coming off of their first dropped conference series to Cal State Fullerton. With the series loss, the Gauchos drop into third place in the Big West with a 12-6 conference and 35-13-1 overall record.

Both UC Irvine and Fullerton won two of three this weekend as they tie for first with a 13-5 conference record.

A combined effort from starting pitcher, sophomore righty.  Shane Bieber and junior righty Domenic Mazza got the only series win for the Gauchos during Sunday’s game. Bieber pitched through six innings allowing five hits for the only two runs allowed. In the 26 batters he faced, Bieber struck out five and walked two. Mazza came in to close the game with three near perfect innings.

Mazza allowed no hits and no runs while striking out four, but walking two opposing batters.  This was Mazza’s second appearance this week after his first loss of the season to Bakersfield last Tuesday.

With this weekend both Bieber and Mazza maintain spots on conference leader boards.  Bieber now holds the conference’s sixth-best earned run average at 2.08, and Mazza comes in at No. 8 throwing a 2.24. Mazza has thrown in nearly every midweek game this year and can be expected to appear today against Bakersfield.

Both junior utility player Robby Nesovic and senior outfielder Cameron Newell appeared in Sunday’s lineup following short stints of absence due to injury. Hurting his hand last week and having been unable to close since, Nesovic still went 2-4 with no strikeouts and accounting for one run.

Newell also performed going 2-3 against the Fullerton pitching staff including starter John Gavin who pitched through 6.1 innings allowing seven hits and all three Gaucho runs scored. Newell drew one walk, accounted for one run and had no strikeouts.

Collectively the UCSB lineup is hitting for a conference best .291 batting average. The Gauchos also hold the conference’s highest on-base percentage at .374.

Bakersfield’s sophomore utility player Max Carter is currently topping the team with a .360 batting average and the second best OBP at .427. This season, Carter has had 20 RBI with 40 sings and 10 doubles. Roadrunner sophomore infielder David Metzgar has the team’s second best batting average, has recorded 70 singles, 14 doubles and a team-best 33 RBI.

UCSB is scheduled to face Bakersfield tonight at 6 p.m.