The Daily Nexus
News
Senate Talks Calculators, Bikes, Library Expansion
May 7, 2015 at 5:00 am by Noah Brennan-Greenbaum and Alyssa Schmidt 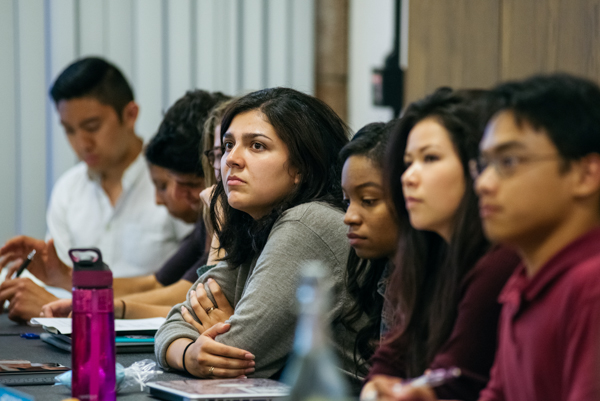 The Associated Students Senate met to review funding options for several campus projects Wednesday night in the Flying A room of the UCen.

A.S. controller and fourth-year electrical engineering major Amir Khazaieli spoke to Senate about a proposed program to expand A.S.’s current i>Clicker rental service into “A.S. Tech Rental,” which will loan students equipment such as calculators and phone and laptop chargers.

“The i>Clicker rental program pilot gave us much insight on this type of project,” Khazaieli said. “For Spring Quarter 2015, forty i>Clickers were loaned out.”

Khazaieli said A.S. Tech Rental will have a website to help students understand the program.

“[It] will have all the listed items with a picture of the item next to it, the loan time limit, the loan price, the liability price, and if the item is currently in stock and available,” Khazaieli said.

Khazaieli said the estimated prices for 24-hour rental start at $1 for scientific calculators and $5 for graphing calculators. Phone and laptop chargers will be free for four-hour periods. Depending on the item rented, rental periods will range between four hours to one full quarter.

The estimated start-up cost of A.S. Tech Rental Program is $586.60 and A.S. is looking into reducing costs by purchasing used items from students, according to Khazaieli.

One of the things we would be looking to do with a grant potentially is to create traffic lights on Pardall that would be at the Embarcadero intersections to make them a lot safer and also just to slow down traffic. – A.S. Bike Committee Vice Chair Patrick “Mac” Kennedy

Kennedy said the Bike Committee is pursuing outside funding for projects, such as installing traffic lights on Pardall Rd.

“One of the things we would be looking to do with a grant potentially is to create traffic lights on Pardall that would be at the Embarcadero intersections to make them a lot safer and also just to slow down traffic,” Kennedy said. “There are a lot of bad accidents there.”

According to Kennedy, a second A.S. bike shop is under construction at the San Joaquin Apartments to better serve those living in off-campus, university-owned housing.

“There’s already like 2,000 students who don’t have access to the bike shop,” Kennedy said. “There’s about to be 2,000 more with Sierra Madre and San Joaquin.”

Third-year biochemistry major Leah Johnson requested the Senate’s approval to receive $900 from Community Affairs Board (CAB) to cater a dinner sponsored by Camp Kesem, an organization that raises money for children of parents diagnosed with cancer.

“This is their first year on campus,” Mancini said. “CAB wanted to support them. CAB made the decision to fund them because they thought the organization and event was important. I think we should respect CAB’s decision and grant them the funds.”

College of Engineering Collegiate Senator and fourth-year mechanical engineering major Jonathan Rothchild said the Camp Kesem should receive funding from CAB because of their initiative in seeking sponsorship.

“They go out and actively seek sponsorship,” Rothschild said. “They’re a very strong organization. I support their cause wholeheartedly.”

Some of the things that were brought up included … outfitting all UCPD police with body cams. – A.S. President Ali Guthy

“Some of the things that were brought up included … outfitting all UCPD police with body cams,” Guthy said. “The President promised to do some research on the cost of that, as well as talking about mental health services.”

According to Guthy, Napolitano will increase the student services fee to fund mental health programs.

“She plans to increase the student services fee and have 50 percent of those funds allocated to mental health,” Guthy said.

New senate unallocated funds will be available when the new fiscal year begins in July.

After approving the 2015-’16 budget, Senate had a $17,794.74 balance to reallocate. They granted the A.S. Student Initiated Recruitment and Retention Committee $1,000 and moved the difference to unallocated.