The Daily Nexus
News
Guerry Awards Honor Efforts of Community Police
May 7, 2015 at 5:00 am by Cheryl Sun and Juliet Bachtel 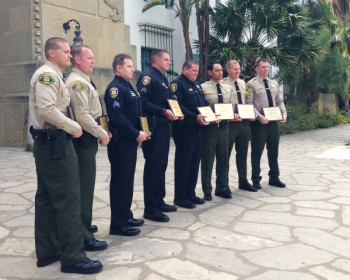 Five SBCSO deputies and three UCPD officers were awarded the H. Thomas Guerry Award for valor at the ceremony and several other local law enforcement officials were also celebrated for superior performance. The prestigious award is named after former Santa Barbara police detective H. Thomas Guerry, who was shot and killed in 1970 by two suspects attempting to rob a bar downtown.

UCPD Corporal Gregory Pierce said despite the unfortunate circumstances, he is honored to attend the ceremony and hopes to bridge an understanding between the community and the police.

“We’re all honored to be here, but it’s an unfortunate reason that we’re all standing here,” Pierce said. “But taking a positive attitude, building a relationship with the community and understanding what we do on a daily basis, what we’re capable of doing kind of put some closure to this event for the law enforcement.”

UCPD sergeant Dan Wilson said community members should take preventative measures and reach out to the police if they have mental health concerns about someone.

“We really need to work on the mental health aspect in our community, because that’s an epidemic that’s really facing our country right now,” Wilson said. “Usually somebody knows something before it happens, but they fail to report it. And, unfortunately, we’re unable to prevent that from happening.”

According to Pierce, events such as Pizza with Police, Coffee with Cops and UCSB residence hall programs are a good start to communicating with residents and students.

“I know that our agency at UCSB tends to do a lot more community outreach,” Pierce said. “We have the res hall liaison program, where officers are assigned to those res halls and they provide information and talks on how to be safe in Isla Vista. That’s definitely one that helps us build those relationships.”

Wilson said Pizza with Police is important because it “allows [the police] to be human” and allows the community feel more relaxed around cops.

“They get to know us by name and they can actually feel comfortable approaching us, and that’s kind of breaking down those barriers because a lot of times, people don’t feel comfortable [so] they’re not going to say anything,” Wilson said. “A lot more students are approaching police officers and having a relationship and talking and you can see it by them saying thank you.”

According to UCPD Corporal Bradley Prows, open communication must be ensured in I.V. because the police exist to serve the public.

“We are there to serve them so you have to have an open dialogue back and forth that is a healthy exchange of ideas,” Prows said. “I mean if an officer were to tell you they aren’t interested in what you have to say, you’re looking at a fool.”

Prows said Chancellor Henry T. Yang is bringing in officers from UCLA, UC Irvine and UC Riverside every weekend to maintain safety on campus and in I.V.

“We’ve had that every weekend … officers coming in Thursday through Sunday,” Prows said. “There’s been a huge commitment on it on the part of the chancellor to ensure the safety of the community.”

According to Prows, the argument that there is too much police presence in I.V. has no basis, especially given the string of recent robberies this past week.

“I think you could have a spirited debate between people saying it’s too much and people who are victims of either nonviolent or violent crimes that would say there’s not enough,” Prows said. “Especially this last week we’ve had three armed robberies, I’d have to argue that we don’t have enough officers.”

Wilson said he approves of the university’s steps in taking “a bigger interest in the community” by providing alternative events to popular I.V. festivities such as concerts and fairs.

“We’re getting together on different platforms to try to talk about issues and come up with resolutions,” Wilson said. “I think having different alternatives during these in advance, whether they’re planned or not, like the concerts, places for people to go — it’s the little things that make a big difference.”