The Daily Nexus
News
Locals Gather to Raise Awareness for the Houseless
May 5, 2015 at 6:24 pm by Juliet Bachtel 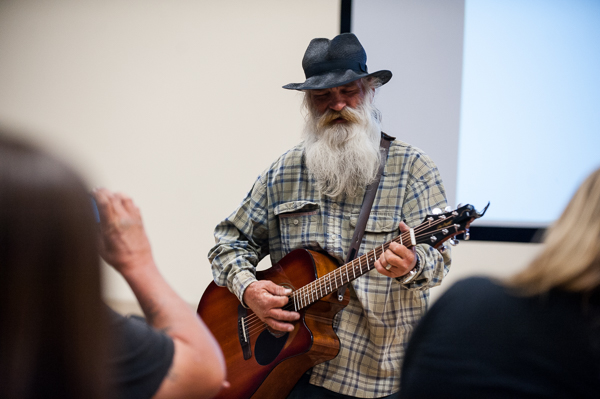 The Santa Barbara County Sheriff’s Office volunteer chaplain Father Jon-Stephen Hedges and sociology professor Craig Rawlings both spoke at the event, followed by a panel discussion with representatives from Santa Barbara Common Ground, a nonprofit organization dedicated to combating houselessness. The evening ended with long-term I.V. houseless resident Clyde performing Buffalo Springfield’s “For What It’s Worth” on the guitar.

Hedges said while many people think of houselessness as an abstract problem, it is actually an issue made up of individuals.

“They are not a population,” Hedges said. “They are persons who you can meet and know by name and by stories, not by what group they’re a part of.”

Anyone can become houseless given unfavorable circumstances, according to Hedges.

“In a blink, any one of us can become homeless,” Hedges said. “We’ve seen it happen. A house burned and that family becomes homeless. During the landslide, a lot of those folks became homeless for a while.”

Hedges said while nonprofit organizations need to create opportunities for houseless people, they should not try to “fix” them.

“We stepped in and gave them [houseless people] a key to provide opportunity and advocacy to get their lives back together,” Hedges said. “They take it upon themselves to better their lives.”

Hedges also said houseless people have died in I.V. this past year, specifically his friend, Little Rick, who passed away after struggling with addiction and depression.

“He ended up dying behind that … liquor store in Isla Vista,” Hedges said. “He drank himself to near death then died of hypothermia that night. He had no will to live, and it broke my heart.”

“There’s a set of characteristics homeless people have — low self-esteem, difficulty holding a job, etcetera,” Rawlings said. “If you tell them they can’t make it or they’re inferior or can’t do certain things, they will lose the motivation to try.”

Rawlings said society’s conceptions on homelessness do not reflect the root of the problem.

“We carry in our heads bullshit of how the world really works,” Rawlings said. “What is true and what is legitimization — stories we tell ourselves that makes us feel better about the world.”

“Poverty is seen an individual problem — people are poor because they don’t work hard. They’re not the toughest of the lot, but that’s not true,” Rawlings said. “The basis of these B.S. theories on inequality is through an overemphasis on being individuals.”

“You end up filling out dozens of paperwork to apply for anything, and people say homeless people are just getting free handouts, which may be true, but they’re working hard to get even the simplest things,” Gruver said. “I want to change the stigma that being homeless is easy.”

“I’m grateful it happens in the first place, it’s a good step in the right direction, but more needs to be done,” Jim said. “Only an hour and a half can’t even begin to explain what we go through every day.”

According to Jim, being houseless in Isla Vista is like living in a “war zone.”

“At night we get this breeze from Alaska that will be like 10 degrees — you can die of hypothermia,” Jim said. “The kids don’t care and will run over you with bikes and you’re constantly living in a state of fear from being attacked or mugged or raped by anyone. The people here don’t give a damn about us.”