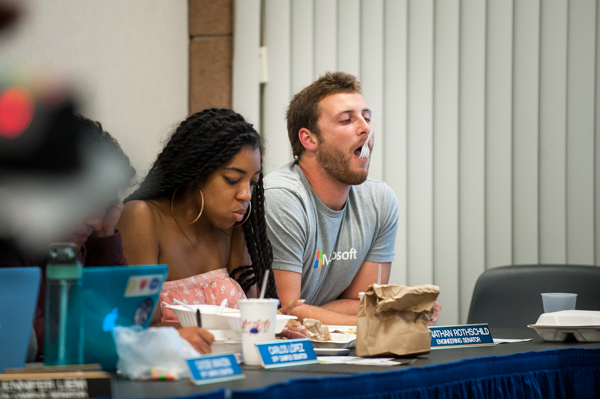 The Associated Students Senate met Wednesday night in the Flying A room of the UCen to discuss how to spend the remainder of its unallocated budget for the 2014-2015 year.

Co-president of UCSB Active Minds Lilia Goldenberg said the group will host guest speaker Meg Hutchinson and an open-mic night for students on May 20 to discuss the events of May 23 last year.

“[Hutchinson is] a poet and a songwriter who uses yoga and meditation and suffers from bipolar disorder,” Goldenberg said. “We’re opening it up into an open mic night afterwards in light of the tragedy, so we want to bring out student artists and pretty much anyone who wants to express anything that they feel in regards to the tragedy.”

There should be exceptions to every rule for certain things, including things like sexual assault, mental health. There are some issues that are bigger than normal precedents and I think we should fully fund them. – A.S. CCS Collegiate Senator Liam Stanton

“I know we set a precedent not funding OSL groups, but because of the gravity of all things coming together next month I think we should grant this request,” Kwok said.

A.S. CCS Collegiate Senator and second-year CCS physics major Liam Stanton said he agreed with Kwok that Senate should make an exception to the rule given the sensitivity of the issue.

“There should be exceptions to every rule for certain things, including things like sexual assault, mental health,” Stanton said. “There are some issues that are bigger than normal precedents and I think we should fully fund them.”

A.S. Chief Financial Officer and fourth-year psychology major Andre Theus said Senate should not fund the Persian Student Group’s request for $500 for food at the upcoming Persian Student Group culture show because it already granted the group funding earlier in the year.

“If you had read the minutes, you would have known that,” Theus said. “Lead with your heart on decisions, but also lead with the legal code.”

Theus said A.S. must adhere to the legal code because it affects future decisions for unallocated funds.

“We set a precedent of not using that Senate unallocated money,” Theus said. “That’s not what the purpose is.”

The University of California system was built on a foundation of quality, affordability and accessibility for the state. And, yet, in the last few decades, the state of California has shown a pattern of consistent disinvestment in how it funds higher education — currently students are paying for the bulk of the funding for higher education. – A.S. Chief Financial Officer Andre Theus

“Senate unallocated funding has been used to fund A.S. groups that need additional revenue for programs or projects,” Guthy said. “When I was going through the budget, my top priority was re-funding groups that got cut. I did increase special projects funding for IVP so that’s where senate can pull from for some of its projects.”

Senator Matthew Santos said he did not feel comfortable voting on Guthy’s proposed budget with so many senators absent.

“Right now there are more proxies here than there are people,” Santos said. “I’d much rather take a vote with all of our senators present because I’d rather have Daisy and Nadia and Koo and Iseah and Firenze and Jenna.”

The senate voted to table the budget proposal for one week.

Theus said the UC system has lost sight of its original goal to bring an affordable education to its students.

“The University of California system was built on a foundation of quality, affordability and accessibility for the state,” Theus said. “And, yet, in the last few decades, the state of California has shown a pattern of consistent disinvestment in how it funds higher education — currently students are paying for the bulk of the funding for higher education.”

“This guide has been designed to help students understand how much they pay on the UC level, the UCSB level and into the Associated Students,” Theus said. “This resource aims to make these fees more transparent for you and to help you navigate the complicated financial procedures that revolve around funding.”

“We got the results for the 24-hour café,” Goulhiane said. “We lost only 500 dollars, so that’s good, so they put it past the board again and they accepted it so we’re gonna have a 24-hour café again for this quarter.”

“It’s been about 24 hours, but I have people from elsewhere messaging me saying, ‘Why is this a California thing?’” Singh said. “‘Why don’t you make it a nationwide thing?’ Basically, we created a place for people to talk about problems and validate what’s going on when it comes to tuition increases.”

A version of this story appeared on page 4 of the Thursday, April 30, 2015 print edition of the Daily Nexus.

Rothschild is so sexy its unreal