The Daily Nexus
Sports
NBA Playoffs: A Closer Look at the First Round
April 30, 2015 at 5:05 am by Michael Jorgenson and Daniel Moebus-Bowles 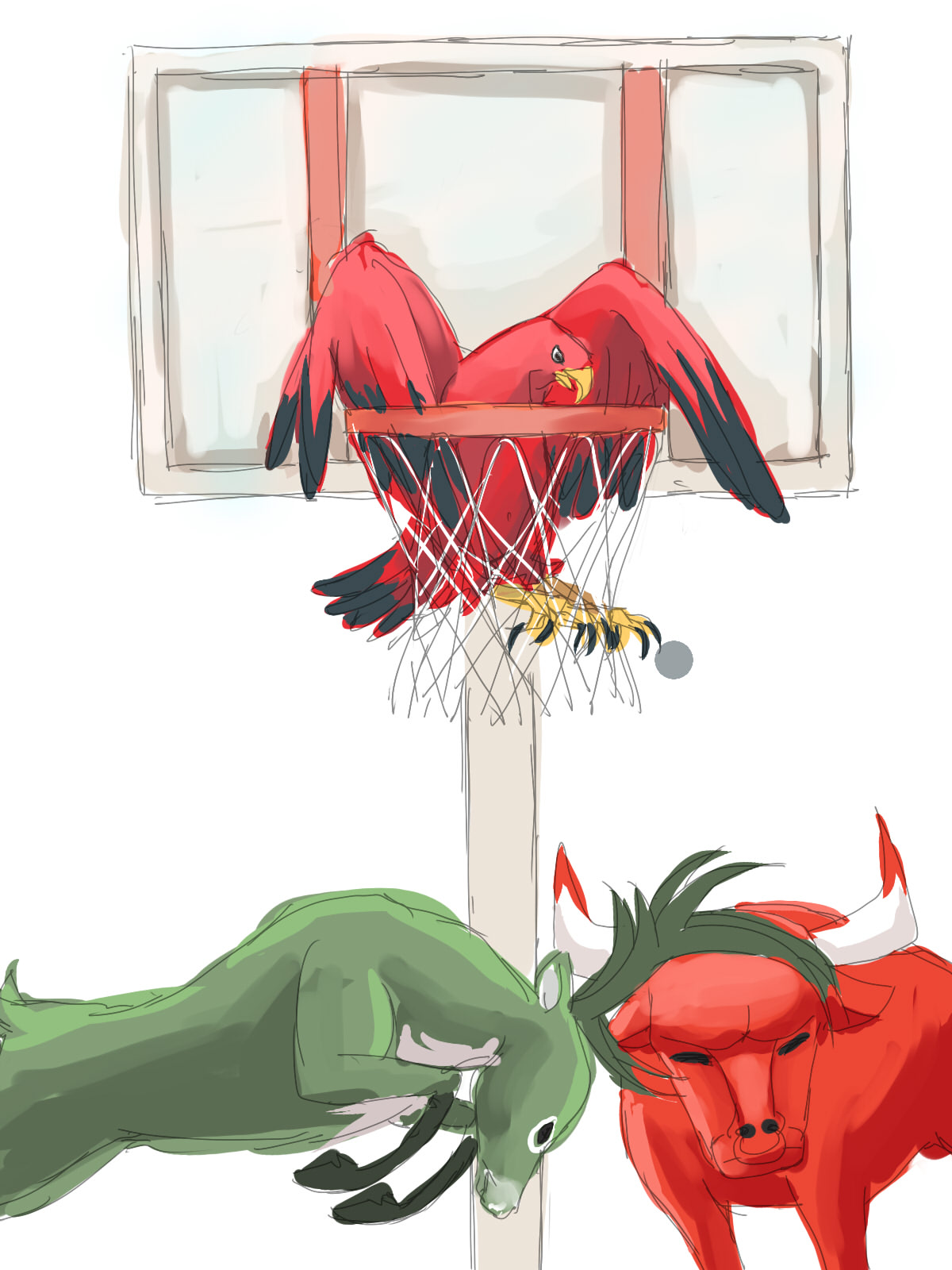 Dear Mr. Silver, Can We Please Get Some Balance?

Another year, another first round of the playoffs and yet another sorry Eastern Conference.

Every year, we see the same story: The “Wild West” boasts a large number of 50-win teams, while the East has about one or two teams that have just a slim chance of challenging whatever squad LeBron James is on. The rest of the East is just there to fill the void.

In fact, excluding the lockout shortened 2011-12 season, the last time the East didn’t have at least one playoff team at or below .500 was all the way back in 2005!

The last time the West had a team below .500 in a full season? All the way back in 1997. Back when Kobe Bryant hadn’t even grown his first afro. Back when Michael Jordan was still winning championships with the Bulls. That long ago.

Nobody wants to see teams with losing records getting swept out of the first round like some sad formality. I know I don’t. I’m sure Charles Barkley doesn’t either. And his opinion matters.

Why should OKC not get a chance to play in May with a record of 45-37 when you have the Brooklyn Nets six games under .500 at 38-44 getting a chance to upset the top-seeded Atlanta Hawks?

And this brings me to my next point. Since teams in the East play three or four games against each other while they only play the West two times a year, how will we ever know how good the East really is?

Sure, the Hawks can take the No. 1 seed going an impressive 60-22, but does that even mean anything? To me, it means that their strength of schedule was a whole lot easier than OKC’s. Who knows what Russell Westbrook and the Thunder could have accomplished if they were located just a couple states to the right.

To prove my point, the aforementioned Brooklyn Nets, who entered their first round series with Atlanta with a sizable 22-win margin between the two teams, managed to send the series back to Atlanta for Game 5 tied 2-2.

The Hawks have since taken a 3-2 lead, but let’s get one thing straight: home-court advantage or not, I don’t think Atlanta is scaring anyone in the conference finals. And we all know who is most likely going to be waiting for them there, unless the Bulls can finally get past “The King”.

Sadly, Chicago has only helped prove my point even more, dropping two straight games to the extremely talented (not really) Milwaukee Bucks, who claimed the six seed with a 41-41 record.

Where would these teams be if they had to play three or four games against Western Conference teams throughout the season? My guess is closer to the Lakers’ record these past two years. Sorry Laker fans, it hurts me, too.

So the question of when, if ever, the NBA will reformat the playoff seeding structure to create a fairer set of matchups continues to be asked. Luckily for those poor fans of middling-Western-Conference-past who have had to look at the standings and say “Darn, we didn’t make it this year, but if we were in the East we would’ve had home-court advantage!” NBA commissioner Adam Silver has already claimed that he will be “looking into restructuring” the playoff structure.

Why hasn’t this been looked into in the past? I blame David Stern, but then again I blame him for everything. I blame him for ruining the end of Kobe’s career, I blame him for making the Clippers the team to cheer for in L.A., I blame him for when I stubbed my toe getting out of the shower this morning. I wouldn’t be surprised if he and Donald Sterling were related, and I’m not sure if that even makes sense. I just don’t like the man.

But on a more serious note, the end of this poorly-structured playoff setup may be nearing its end, or at least on its way to some improvements. Unless, of course, Silver is just biding his time until the conferences balance out a bit and he doesn’t have to change anything.

Either way, I’m just happy I’m not a fan of a No. 9, 10, or 11 seed in the West that has to watch from home as a team like the Nets goes toe-to-toe with the East’s finest in Atlanta. I’m proud to cheer on my Lakers and their 14th-best standing in the West. Go big or go home, baby.

First Round Just as Exciting as Ever

Last year’s NBA Playoffs were definitely one to remember, especially in that first round that drew five game sevens. The action was exciting, there were quality teams and both Kevin Durant and Paul George were active and lively. There was nothing not to love about last year’s playoffs, but as we have moved to this year’s postseason, there is definitely a dissonance that has been ignited by the past action.

NBA fans have become completely spoiled by the insanity that was first round last year and we have become unappreciative of the great basketball that is being played just before our eyes simply because more than half of the series aren’t headed to a sudden death game and the series are little more one-sided.

What us fans need right now is to think back to before last year’s playoffs, when we were actually gracious for such a postseason. This year, everything is different and we should treat it as such, which means realizing how to enjoy this excitement from this year’s perspective.

I mean just look at the No. 1 seeds this year, which held the sixth and eighth seeds in 2014 and took first round exits. We don’t even have any of the same players in the MVP race and three of the teams that made the conference finals last year (Miami, Indiana, Oklahoma City) didn’t even make it to the postseason.

If you are like me and hail from SoCal, I hope that you were able to enjoy the Warriors vs. Pelicans series since it was actually a fun series. Yes, I know you’re tired of the Warriors and you’re afraid of the subsequent trash-talk from your NorCal housemates, but please don’t think that they walked through that series.

The average margin of victory for Golden State in that series was just eight points over New Orleans. If the No. 1 seed in the conference with the NBA’s best record only beats the eighth seed by eight points a game, then the Western Conference must be as powerful as they say it is. Don’t let a series let you think otherwise simply because one team got swept.

We got to see what kinds of things the mighty Warriors struggle with, such as guarding someone like Anthony Davis, who held the best stat line out of any player in the first round so far. He averaged 31.5 points, 11 boards, three blocks and a little over one steal while shooting 54 percent from the field in his first playoffs series ever. The kid really showed that he belongs not only in the league, but also in the places of the league where the lights shine the brightest.

Luckily for the Warriors there isn’t anyone else like A.D. in the NBA, but we’ll see how they can handle the duo of Zach Randolph and Marc Gasol.

So on the West side of the bracket we had a sweep, but what about the East side? We had two of them and they were both even more interesting than the Warriors’ win.

Washington took everybody by surprise after being the only team to snatch up any wins on the road and played even better when they got home, where they have struggled. The Wizards didn’t have much of a second half to their season, which led people to pick the Raptors to win or at least make the series go longer than four games. Washington showed up though and now has a record of 8-1 as the five seed in the last two years in the first round.

The Cavs had the other sweep, and the hasty drama that followed made it all the more fun to watch. Although they won all four games, it got very chippy and the injury to K-Love could make that Celtics series hold a little more weight to the Cavs’ performance going forward.

Away from these sweeps, we truly have many series that are playing out just how we love them to. There are still two series out East that have yet to be decided, and along with that, the Clippers and Spurs are making the Playoffs amazing on their own!

Look, I know it’s not the same as last year’s playoffs but that doesn’t means it’s any less exciting, it’s just different. Let’s start being real fans again and enjoy what the league has in store for us. Let’s be gracious, not greedy.

A version of this article appeared on page 9 of April 30, 2015’s print edition of the Daily Nexus.