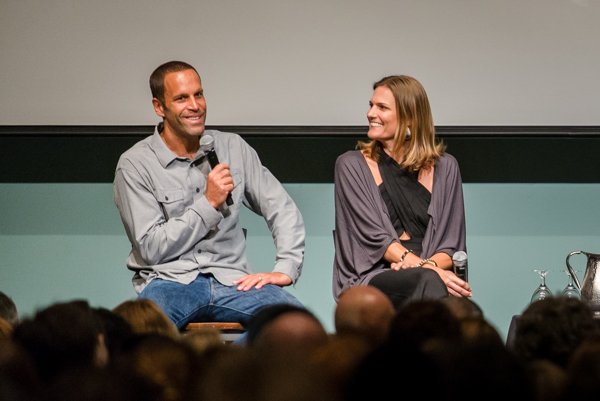 In September 1993, one week into UC Santa Barbara’s Fall Quarter, Jack Johnson was sitting with his new friend from Black Studies 6 Eric Cardenas at Ortega Dining Commons. A momma’s boy his whole life, Johnson spent the flight to school from his hometown in Oahu crying tears of homesickness. Now that he was getting into the swing of things, the homesickness was subsiding a little, especially when he spotted a girl named Kim. Intense eye contact was made, so intense that she sat next to him. Kim was a math major gearing up to become a teacher. Tall with light brown eyes, she was a “girl next door” type from Texas. Jack was smitten.

“I was a momma’s boy … and of course it took me just a week to find a new mom,” Johnson said to a hooting crowd at Corwin Pavilion Friday, April 24. “I mean, [she] did start washing my clothes for me.”

When it comes to legendary UCSB alumni, no one fits the mold more than Jack Johnson. As the acoustic crooner who put De La Guerra Dining Commons on the map in the song “Bubble Toes,” — although the actual Jack and Kim meeting place was Ortega, DLG just rhymed better — Johnson is a seminal embodiment of this grand school we call home.

Seriously, when thinking of UCSB, it’s all green living, fit bodies, a lively music scene and 5 a.m. sessions at Sands. Jack surfs the swell, croons, keeps in shape and is so environmentally conscious that disposable cutlery is banned from his tours. There’s not one Gaucho who epitomizes Santa Barbara’s quintessential attributes better.

But there is one thing that keeps Jack away from the classification of the average Gaucho: He’s not a hit-it-and-quit-it kind of guy. It’s no secret that the voraciously social scene of UCSB creates a hookup culture where one night stands are the norm. In this carnal college town, a steady, stable relationship is nearly unheard of. A relationship in I.V. is almost as fabled as Jim Morrison’s time spent here in the ’60s when he wrote “Crystal Ship” after Platform Holly.

And then Jack and Kim Johnson show up for Alumni Weekend, and the two expel such extensive bouts of cuteness that people believe in true love again. The pair returned to Santa Barbara to receive the UCSB Distinguished Alumni Award for their sustainability and green initiatives within the Hawaiian education system and the music industry. The award fit suitably with UCSB’s newest accolade as the greenest public university in America.

In their trip to campus, the Johnsons planted citrus trees at Storke plaza, hung out with Chancellor Yang and his wife, Dilling, and stopped by some of their old stomping grounds in Isla Vista.

“We went to I.V. today and saw our niece’s apartment, which happens to be our friend’s apartment 15, 20 years ago,” Kim said. “I.V. hasn’t changed that much. I think it’s the same carpet.”

As part of the event, Jack and Kim showed a documentary of their green initiatives with the All At Once campaign, a tour that combined concerts with plastic-free, local food education. The documentary was followed by a Q&A that dished out details from the couple’s way too adorable college lives.

The song “Do You Remember” chronicles snippets of the young love, mentioning a house with a big piano, a treehouse built on campus that burned down and a bike getting locked to another.

“He really did lock his bike to my bike, outside of I.V. Theater,” Kim said. “We had already met in the dining commons but we didn’t really see each other after that. So I walked out of my class a week later, and someone locked their bike to my bike and I thought ‘Oh my gosh, I can’t go to lunch right now.’”

But the story gets better than that. “He [was] hiding in the bushes. He likes to think he’s off to the side being super cool, smoking a cigarette, but really he was hiding. Then he said, ‘Hey, wanna go get lunch?’” Kim said, grinning.

Following their freshmen year, Jack and Kim ended up living across the street from each other at the end of Sueno, and again on the 66 block of Sabado Tarde.

“Then we moved to Trigo — we had a little space with a garden, and that was the first space we gardened,” Jack said.

“Kim had already read all of Jack Kerouac and the Beatnik stuff, and I was just getting into that,” the 39-year-old singer said. “She had better taste than me … She’s always been my co-writer [for songs], except the love songs. I don’t let her see those until they’re done.” According to Kim, most of the love songs are written on a whim when Jack forgets a birthday or an anniversary. “Angel” was written one Christmas.

While dating his college sweetheart and pursuing his film and media studies degree — Jack was keen to make surf documentaries — the soon-to-be professional singer had a DP party band called Soil which formed out of the Anacapa Residence Hall. Soil’s rival band was Django Reinhardt, a group formed by pianist Zach Gill who now plays in Johnson’s band. The two bands would fight it out to get more people to come to their shows, whether it was at a house party or at the Hub.

“If we heard Django was playing a house party the same night we did, we had to get another keg. So we’d always have two kegs,” Jack said.

Post-college, Kim got her master’s in teaching at UCSB and started at Dos Pueblos High School. Jack did video production gigs, made surf movies and shot music videos for the Foo Fighters and Limp Bizkit. He wrote the soundtrack to the surf cult hit “Thicker Than Water.” This was the big break in his singing-songwriting career and caused Ben Harper to invite Jack to perform alongside him in 2001. That same year, the Hawaiian native released his first album, Brushfire Fairytales, which went platinum in the States and reached number one in New Zealand.

But a year before Jack blew up on the radio, his best day ever was spent getting married to his college sweetheart, barefoot and on the beach.

Upon receiving the Distinguished Alumni Award, Jack repeated how wonderful it was to get an award as a couple.

“To me this is the biggest honor, that they recognize us both … then I look back at our tours and I see the evolution, where we got to while working with non-profit groups, I’m really proud of where we’ve gotten. And Kim is more than 50 percent of that.”

Jack and Kim Johnson’s relationship is the ultimate partnership — a love story in this seemingly hapless beach town. It’s always better when they’re together.

To find out more about Jack and Kim Johnson’s green initiatives, go to allatonce.org.

Zach’s band name was Django, not Jango (as in “Django Reinhardt”).

Thank you for pointing that out Heather! We’ll change it accordingly.

“When it comes to legendary UCSB alumni, no one fits the mold more than Jack Johnson.”