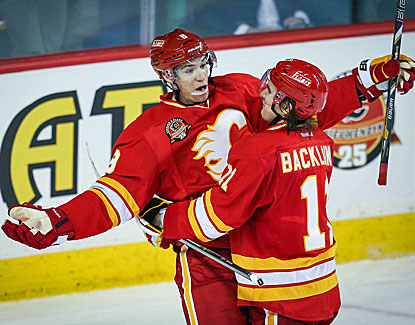 As the first round of the 2015 NHL playoffs comes to a close, it has become much more apparent who the haves and the have nots are when it comes to competing for the Stanley Cup trophy. Flash back to February 25th and the Calgary Flames were on the outside looking in and had just lost their captain and best defenseman for the season due to torn biceps. Ultimately though, the Flames would battle their way to third place in the Pacific Division and on Saturday they completed the first-round upset of the Vancouver Canucks with a 7-4 victory. Calgary represent just one of many head-scratching and jaw-dropping storylines of the past week and with only one game remaining to determine the field of eight, its time to take a look back at the week that was.

Anaheim Ducks vs. Winnipeg Jets (4-0 Ducks)– The quickest series of the postseason so far was not necessarily the most unexciting as well. A lot was learned about both teams and what to expect of their present and their future. The Jets showed major promise for the coming years and while Winnipeg fans will have to wait another year for their first postseason win since 1996, they may not have to wait very long. Tyler Myers is blossoming into the star he once promised to be after being drafted by Buffalo and Ondrej Pavelec and Michael Hutchison are a formidable 1-2 duo in net. As for the Ducks, they look ready to win. Now. Bruce Boudreau had some major pressure put on him after a second round exit last postseason and the resilience and experience of Anaheim this year gives them a good shot to take down upset-minded Calgary. (Hiller’s mouth must be watering at the chance to face his old team.)

Calgary Flames vs. Vancouver Canucks (4-2 Flames)- Just about everything in this series pointed towards Vancouver; however, the Sedins and their playoff woes continued as the upstart Flames added a major statement to their already successful season. Eddie Lack could not provide the goaltending that the Canucks needed to survive and he shut down late by giving up 15 goals in the last four games of the series. On the other hand, everything is coming up Calgary in Canada right now as the Flames not only looked poised and capable of making a serious cup run, but captain Mark Giordano hinted at a possible return to action if the Flames make a deep enough run into May. It may be improbable for Calgary to win, but look for an inspired and gritty bunch to show up to Anaheim ready to give the Ducks everything they have.

Minnesota Wild vs. St. Louis Blues (4-2 Wild)-  Do you hear that popping sound? That is the sound of thousands of NHL fans having their playoff brackets burst by the upset of the talented and trendy St. Louis Blues at the hands of the wrecking ball that is the Minnesota Wild. For the few of those who still do not believe in the power of Devan Dubnyk, his four goals allowed in the four Wild victories show just how essential a role he played in this series. Ken Hitchcock could not get his team to play their best hockey at the most important time and the question will undoubtedly be asked as to how safe his job in St. Louis is. Look for the Blues to be back and ready to go when next postseason rolls around, but the more intriguing question remains: just how far can the Wild ride this hot streak?

Chicago Blackhawks vs. Nashville Predators (4-2 Blackhawks)- This matchup was a Central Division battle that had quite a few intriguing storylines, none more so then the inspired play of Scott Darling. Chicago may have rode the coattails of Corey Crawford throughout the season, as shown by his 57 starts; however, the stakes are raised come postseason time and Darling seems to be the present answer in net for the Hawks. Nashville was plagued by their sloppy play down the stretch and Pekka Rinne was anything but brilliant as he allowed two goals or less in only two games all series. Losing All-Star defenseman and team captain Shea Weber for the season in game 2 did not help matters either.

Washington Capitals vs. New York Islanders (4-3 Capitals)- It was tough to watch the heartbroken Islanders end their historic season the way that they did, but they will be a postseason mainstay for years to come led by captain John Taveras. This was arguably the most exciting series of them all as there was no clear advantage for either team up until the buzzer finally sounded after game 7. Washington was helped out by a team effort with Evegeny Kuznetsov (3), Karl Alzner (2), Jason Chimera (2), Niklas Backstrom (3), and Alex Ovechkin (2) all recording multiple goals throughout the series. New York fought all they could and played valiantly in their last season of calling Brooklyn Nassau Coliseum home. Jaroslav Halak held Washington to only three goals in New York’s three victories but allowed 13 goals in their four defeats.

Detroit Red Wings vs. Tampa Bay Lightning (3-3 Tied)- The only series yet to be decided is exactly the series I predicted to end the quickest. Detroit came limping into the postseason with some major goalie issues but Petr Mrazek has been magnificent throughout this series, including his potential save of the year in Monday’s loss. Detroit has been outshot in every game but one so far this series and the stellar play of Mrazek has been countered by some inattentive goaltending by Ben Bishop. The Lightning are going to need much more from him not only to make it out of the first round, but to have any serious chance of making a run beyond that.

Montreal Canadiens vs. Ottawa Senators (4-2 Canadiens)– Ottawa really did battle up until the last second of this game and this entire season as their road to the postseason was one of the most impressive the NHL has seen in years. The Canadiens proved to be too much as likely Vezina Trophy winner and league MVP Carey Price finally had enough and stopped the Senators comeback bid with a 2-0 shutout win in game 6 on Sunday. Ottawa had a bit of an ironic series as they rode the stellar play of rookie goaltender Andrew Hammond throughout the season to reach the playoffs, but replaced him with previous goalie Craig Anderson who played exceptional over the next four games and might have just extended his career for another season or two.

New York Rangers vs. Pittsburg Penguins (4-1 Rangers)- My, oh my, must it be nice to be a Rangers fan. New York won all four of their games by a score of 2-1, which was the first time in history that a team won all four games while scoring two goals or less. That is much more of a testament to the goaltending of Henrik Lundqvist then it is towards the offense of the Rangers. The Penguins were a talented team who made some noise after their 4-3 victory in game 2; however, they would go cold soon after that and the Rangers simply proved that they were the better team. New York looks poised for a second straight trip to the Stanley Cup Finals and Washington must be shaking in their boots at the thought of having to face a well-rested Rangers squad.