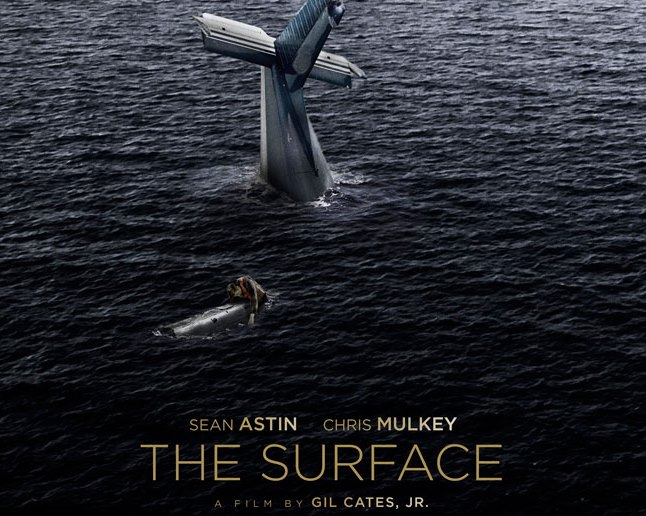 The surface of Lake Michigan is tepid, slow and without a hint of danger. Oh, the irony.

Starring Sean Astin (“The Lord of the Rings”) and Chris Mulkey, “The Surface” is a well-shot and ballsy effort, yet also a plodding and confused affair that left me in a drowsy stupor.

Suicidal Mitch Lowe (Astin) goes out on Lake Michigan to kill himself, but instead comes to the rescue of Kelly, a downed pilot who has a, shall we say, interesting way of responding to getting rescued. Together, they try to survive (for apparently one day) on the lake and get to know each other better.

When you think about it, there isn’t much story here. Mitch’s only defining trait is that he’s suicidally depressed because life has been punching him in the gut with weighted gloves. Kelly’s reason for being out on the lake is a criminal problem that solves itself towards the end of the movie, with absolutely zero consequences for either character.

And the thing about these two guys is that they are not set up particularly well. The movie starts out by beating you over the head about how comically awful Mitch’s life is: his faucet is busted, his mother is in a rest home, the skies are gray and, unlike a nearby jet-ski team, he’s not being covered by Fox News (which is kind of like being sad that the town gossip isn’t paying you enough attention). Then to top it all off, depressing music plays in the background.

Later, serious reasons for why Mitch wants to die come forth: his girlfriend left him for her “soulmate,” and then she died, and Mitch hired his father to work for him at a warehouse, where his head was crushed into paste by a truck. While this is very sad for Mitch, the scenario quickly starts feeling like overkill; these are too many (and some too over-the-top) reasons to die. It feels unrealistic.

Then there’s Kelly, whose first response to being rescued is to pull a knife on his rescuer, which isn’t particularly smart when said rescuer has an oar to whack you over the head with. His later-revealed logic for pulling said knife doesn’t make too much sense under the circumstances either. And to top it all off, Kelly outright tells Mitch to commit suicide, which is an outrageously cruel and stupid thing to do.

What follows is a little over an hour of chit-chat. And it’s actually not bad chit-chat! Some of the conversations are pretty smart and interesting, and make sense under the circumstances. Kelly wants to survive, and Mitch just wants to help this unfortunate man of circumstance.

Also, I want to commend the filmmakers for having the balls to actually film out on the open water. A retrospective on the making of “Jaws” revealed the difficulty of this task, and making “The Surface” must have been exceptionally tough for the cast and crew. It’s a shame that they didn’t spend as much effort on writing the characters. Did I mention the fact that Kelly’s entire point for even being in this movie is resolved towards the end with absolutely zero consequences for the characters?

This movie is no “Life of Pi,” or “All is Lost.” In trying to make you sympathize with these characters, the movie hits you over the head with a spiked mallet and screams “FEEL BAD FOR THEM!” simultaneously. I don’t know about you, but I’m not a fan of being hit over the head. When the entire premise of your film is two guys are stuck on Lake Michigan, and those two characters aren’t written all that well, the experience becomes grating. The only time I ever got emotional during this movie was when I found out via the credits that the cute little wiener dog with only two legs that played Kelly’s pet has since died.

Alex Wehrung would like to plead to Sean Astin not to send Gollum after him for writing this review. Or worse: Elijah Wood.