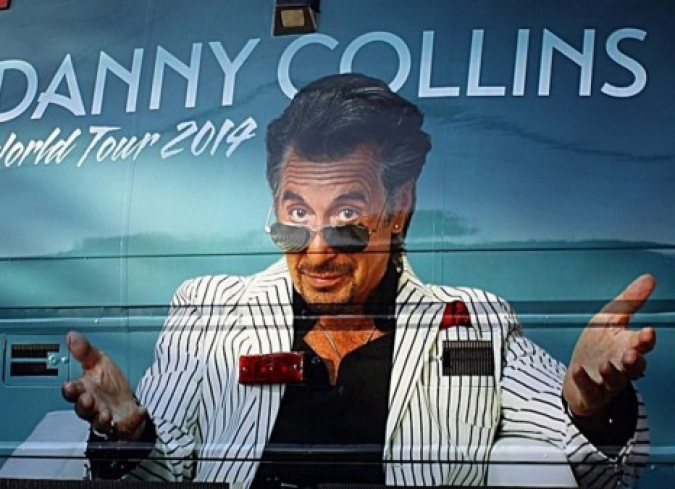 This movie is like a roller-coaster. No, it’s not full of twists and turns; instead, you know exactly what you’re going to get before it’s all over. But it’s still a lot of fun to go on the ride anyhow.

Partially based on a true story, “Danny Collins” stars Al Pacino as the titular character, a has-been rock star who goes around the country on tours at the behest of his manager and best friend (portrayed quite sarcastically by Christopher Plummer) and sings his most famous single, “Hey, Baby Doll” over and over again. On his birthday, Collins is given a letter that his idol John Lennon had written him over three decades prior. Invigorated by this, he decides to turn his life around, so he checks into a Hilton hotel, dumps all of his cocaine down the toilet, and tries to connect with a son that he’s never met before.

If any of that sounds familiar, it’s for good reason. The film’s basic plot is definitely nothing new; things go well, shit happens, things turn around. It’s a feel-good movie; if you’re expecting a twist worthy of Shyamalan (back when Shyamalan didn’t have to avoid using his name in the advertising for his own movies), you’re not getting it. Sorry. But do not fear! What we get is still very much enjoyable, even if you can predict what’s coming next.

The film’s greatest strength is its main character. Danny Collins is extremely likable (apart from the mandatory scene where he majorly screws something up). He’s funny, he’s courteous and he’s flirty, but not to an eye-rolling degree.

Most importantly, he’s trying to make amends with his new family, utilizing both stubbornness and his vast wealth to get on their good side. Collin’s interactions with his love interest, best friend/manager and family feel completely natural, as well as funny. Props to Al Pacino! I can finally forgive him for “Jack and Jill.”

The supporting cast all does fine. Nobody’s going to win any Oscars off this thing, but still. Not all of Christopher Plummer’s jokes land, but when they do, they’re pretty damn amusing. Annette Bening is fine, as well as Jennifer Garner and Bobby Cavanale. And as a millennial, it was neat to see Josh Peck again so long after “Drake and Josh.”

What was a little surprising, though, was the way the plotline focusing on his efforts to make new music ended. And by that, I mean it didn’t. Danny just gives up after his fans shout at him to play “Hey, Baby Doll” again. Um, here’s an idea: play the new song after finishing “Baby Doll.”

Expecting this arc to be definitively wrapped up by the end of the movie since it was what the film started on, I was disappointed to see the less-interesting and clichéd family arc take the center stage for the finale. C’mon, screenwriters.

Bottom line, this movie probably won’t be considered a visionary masterpiece by anyone. But it doesn’t need to be. It’s fun, it’s cute and it’s heartwarming; a run-of-the-mill feel-good flick. Go see it if you’re down. Or up. Makes no difference.

Alex Wehrung is very glad he went to see this instead of “The Longest Ride.”