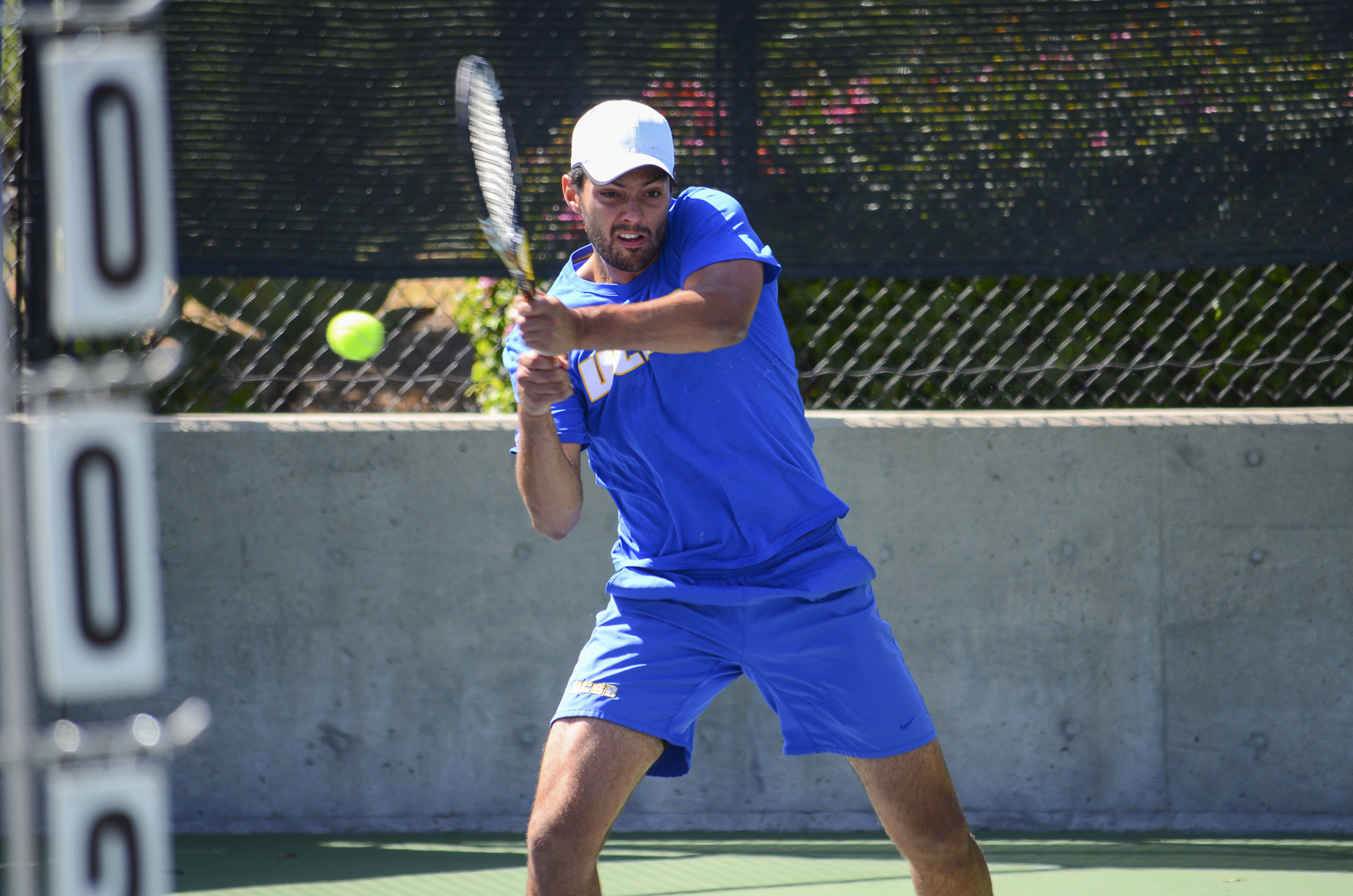 This past weekend the No. 62 UCSB men’s tennis team showed off its skill winning the Big West Conference Tournament and cementing its spot in the NCAA tournament in early May. The Gauchos defeated both Hawaii and UC Davis to make it to the final, where they topped UC Irvine 4-3 to hoist the trophy.

With three wins in the tournament, Santa Barbara improves to an overall record of 15-9 and extends its win streak to four straight.

The first match of the tournament for the three-seeded Gauchos came against the sixth-seeded Hawaii Rainbow Warriors. Earlier in the regular season, Santa Barbara downed Hawaii at home 6-1, and on this past Thursday, it put on a similar performance. The Gauchos took a 4-0 victory and play was stopped for resting purposes.

The Gauchos started off the day battling with the Warriors in the doubles point. Hawaii grabbed a quick win on court three and needed just one more doubles victory to go up 1-0. The senior duo of Ziad Sultan and Tobias Galskov evened the score up with their 6-3 victory on court two. The Gauchos were then able to capture the doubles point with a 6-4 win on the number one court by junior Nathan Eshmade and sophomore Erik Johnsson.

With a 1-0 victory, the Gauchos moved on to the singles round and took three straight set victories on the lower courts to seal the 4-0 win. On court four, freshman Cody Rakela took a 6-3, 6-4 victory and Johnsson finished with the same score on court five. Sophomore Teague Hamilton took the last win with ease 6-1, 6-1 on court six. With this win, the Gauchos looked ahead to a rematch with second-seeded UC Davis.

The Aggies beat out the Gauchos in their regular season matchup just a few weeks ago by a close score of 4-3 in Davis. The story was much different this time around when the two teams met at in this neutral setting, and Santa Barbara took a 4-1 win to advance to the final round.

In the doubles round, UCSB once again showed its dominance as all three doubles teams held leads, and the wins came down to who could finish first. The duo of Eshmade and Johnsson added a 6-3 win and a 6-4 victory from sophomore Morgan Mays and junior Andrew Riminton sealed the point. Galskova and Sultan were stopped with a 5-4 lead.

The Gauchos again took some help from their players on the lower courts when they headed into the singles round. Hamilton and Johnsson added victories for the second straight day to put their team up 3-0 over the Aggies. Hamilton won 6-2, 7-6 on court six and Johnsson triumphed in three sets on court five 6-3, 3-6, 6-3.

Galskov, reclaiming his spot on court one, ended the match and sent his team to final round to take on the first seeded UC Irvine Anteaters with a straight set win of 6-3, 6-2.

In the final match of the Big West Tournament, UCSB would again get a chance to beat a team that downed them during the regular season by the close score of 4-3. The Gauchos got their revenge, delivering the Eaters a 4-3 loss and bringing the Big West title back to Santa Barbara.

The Gauchos started off the finals match just as they had done the previous two, with a win in the doubles round. Eshmade and Johnsson grabbed the first match easily on court one with a score of 6-2, but the Eaters were able to take away the match on court three. The senior captains, Sultan and Galskov, came through for their team with a 6-4 win that put UCSB up 1-0.

Singles play faired the Gauchos in the earlier part of the day as the team quickly took control of match. Freshman Cody Rakela added his second singles win of the tournament in straight sets of 7-6, 6-4 on court four. Johnsson fell early losing his first set 6-0, but battled back to win the next two 6-2, 6-3 on court five. These two wins put the team up 3-0 and the victory seemed inevitable.

With just one more win needed, the Gauchos dropped singles matches on courts one, three, and six, and Irvine was right back in the game tying the score at 3-3. The match and the title came down to Eshmade playing on court two. The junior from Australia was downed 6-7 in the first set and needed the next two to win the tournament for his team. He kept himself alive winning the second set 6-4 and sealed history UCSB winning the third and final set 6-3.

UCSB took home its second tournament title in just three years and grabbed its ninth in school history. With this accomplishment, the Gauchos will be heading to the NCAA tournament May 8th. Seeding is yet to be decided.