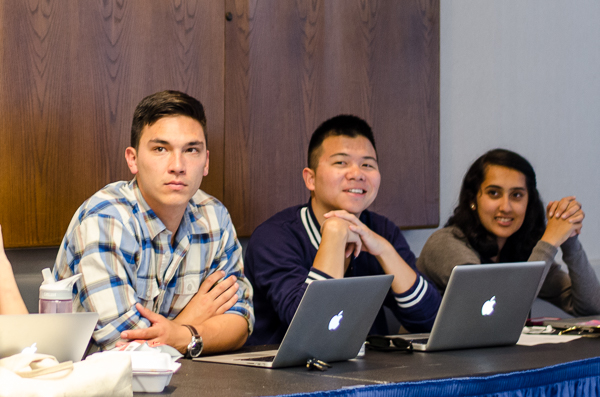 A.S. Senators look on as they hear funding requests from campus organizations. Will Tran/Daily Nexus

The Associated Students Finance and Business Committee met in the State Street Room of the University Center on Friday to address funding requests regarding reallocation and cultural events.

Prior to the meeting, the Office of Student Life (OSL) budget responsible for funding campus clubs stood at $0, the Senate Unallocated Budget used mainly for A.S. financial matters stood at $2,872 and the Graduation and Culture week budget stood at $8,831. Of the three clubs requesting funding, the Black Student Union (BSU) received the full request for $4,300 from the Culture and Graduation budget. The Queer People of Color Collective and Active Minds did not receive funding. The committee also granted a request to reallocate funding for an upcoming Sigma Pi Epsilon fraternity fundraiser.

“Tuesday [May 19] is actually the birthday of Malcolm X so we will be holding an event commemorating his birthday as well Yuri Kochiyama’s, with a candlelight vigil to honor them,” Williams said.

A.S President Ali Guthy also presented the President’s Agenda and said the Academic Affairs Board budget has been cut due to its recent merge with the Office of the Internal Vice President.

In assessing the allocation of funds for Queer People of Color Conference and Active Minds, A.S. Finance and Business Committee advisor Cindy Lopez reminded senators the OSL budget is at $0 and that senate unallocated fees should be kept primarily for A.S. expenses.