Jimi Hendrix, Led Zeppelin, the Rolling Stones, the Beatles and the Doors are the definition of amazing, awesome and astonishing music. If you don’t already know this, then please go back and hide under the rock from which you came. As a reasonably cultured human, you might be itching to dive deeper into the cream of the crop and to expand or rediscover your repertoire of the greatest artists to grace society’s eardrums. For you, good soul, this reporter (with the help of his dad) created a succulent list of sweet, juicy rock bands. Enjoy.

Crosby, Stills, Nash and Young: This band is revolutionary. Their song “Ohio” had a tremendous influence in the political environment and popular culture at the beginning of the ’70s. “Ohio” might be the most poignant, politically-charged song of the time. The lyrics express the blatant truth of government killing their own citizens in the Kent State shootings — what is more incendiary than that? Aside from their activism, Crosby, Stills, Nash and Young also wrote entrancing songs with high vocals that are positively elating. I dare you to try to have a bad time while blasting “Suite Judy Blue Eyes.” You’d have to be a hamster in a dryer to not love this song.

Besides the thrill of their raunchy name, Steely Dan has a tone that is unparalleled in its longevity and brilliance. The harmonies on the chorus of “Reeling in the Years” combined with Donald Fagan’s warm verses make for a smooth and musically engulfing experience. Steely Dan’s catchy melodies, bright harmonies and fast-licking guitar riffs make them a band that can be revered and enjoyed by everyone.

The Allman Brothers Band: Two Words: Duane Allman. Duane Allman is the best slide guitarist ever. You could find someone that could play faster or do some stupid tricks, but nobody plays slide guitar with more heart than Allman. “Statesboro Blues” sounds as if he’s using his heart as the slide; his antics are so ferociously smooth that his strings must be lubricated in his own blood. The zing and electricity that Allman pulls out of a Les Paul with his hands is so blissful that you’ll feel your own fingers tingling.

The Grateful Dead: The Grateful Dead is an all-time band. If you want to get psychedelic, man, you’ve found the band. This group demands your full attention, regardless of whether or not you’re strung out and stoned. The most common doctor recommendation for listening is getting absolutely blasted, lighting a few candles or incense and watching hours of live footage. The Dead were known for their entrancing live performances and long winding jams. Take some time to explore the music and let it unravel your innermost thoughts.

The Doobie Brothers: The Doobie Brothers got soul. Their pure sound brings you back to your roots and home. This is the band that you’ll want to play if you’re trying to get your romance on under the California sun. You know, that good slow love that happens while you’re dancing on tables on a bright spring day. Songs like “Listen to the Music” and “Black Water” make the perfect backdrop for barbecuing with some good friends and a few cold ones. Plus the group has the word “doobie” in their name, so spark it, brah! (Disclaimer, drugs are bad, mmk?)

Ryan Mandell and his dad — who still parties, kind of — know good music. 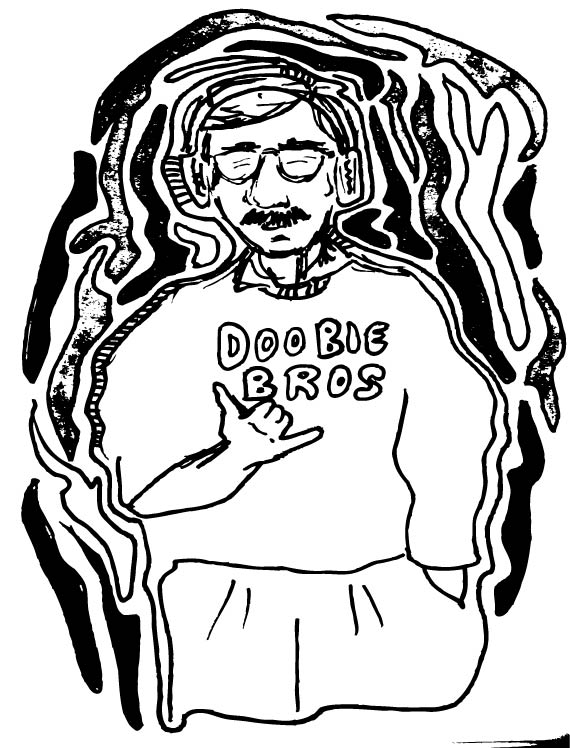 The Doobies have always been and still are one of the best live bands on the planet – very powerful studio quality players.