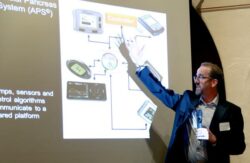 UCSB students and faculty assembled in Isla Vista’s Embarcadero Hall on Saturday, April 11 for an afternoon of innovation and inspiration with TEDx.

Technology, Entertainment and Design (TED) is a nonprofit organization committed to spreading ideas around the world through powerful talks about everything from science to education. In the spirit of this mission, the TEDx program emerged to share ideas and promote discussions within local communities. Hosted by the Regents and Chancellor’s Scholars Association (RCSA) and organized by Edward Trout. This year’s event, titled “Unveiling the New: In Pursuit of the Next” marks UCSB’s third TEDx event.

One of the keynote speakers, Frank Doyle, Chemical Engineering professor, discussed his work on engineering an artificial pancreas. He began by first introducing the concept of feedback control, an essential function of the pancreas which helps to maintain blood-sugar levels in the body.

“If you take nothing else from my lecture today, [know that] control is sense and respond,” Doyle said.

When blood sugar is high, pancreatic beta cells quorum sense the change via glucose receptors and respond by secreting insulin in order to stabilize blood sugar levels. The failure of this sense and respond function results in diabetes, a disease with an increasing death rate in upper-middle income countries.

Doyle presented models of pocket-sized gadgets, including a portable glucose sensor and an insulin pump. Although these devices currently exist as separate components, they are available to help diabetic patients maintain stable blood sugar levels.

The artificial pancreas exhibits a closed feedback loop between these two senses and respond technologies. A controller, small enough to be a chip on a cellphone, stores data on the user’s ideal blood sugar level. When the level is off target, the controller sends a message to the pump, which regulates glucose in the body; this information is then sensed and relayed back to the controller. Due to this closed feedback loop mechanism, those with diabetes are able to live with more comfort and less worry.

Next to step on stage was computer science lecturer Dr. Diana Franklin, who opened by arguing that computer science, as an expanding field with good jobs, can counter the growing income distribution gap. However, the resources to teach such skills (and ultimately foster interest in the field) are absent from minority communities, which actually contributes to the problem.

“Many high schools that a lot of Latino and African Americans attend don’t have computing curricula at all,” Franklin said. “So by going into the K-12 space, instead of being an equalizing force, it’s actually creating more inequity.”

Franklin is currently mapping out learning progression in grades K-6, in order to establish a computer instruction program for young students.

“Once we know that learning progression, then we need to create curriculum … programming languages … development environments [and] off-the-computer activities that can be used in the classroom by a teacher who’s not a computer science expert to teach students computer science,” Franklin said.

Innovations like the artificial pancreas and the introduction of computer science to elementary school curricula do not emerge without those bold enough to propose the first steps, but the proud speakers at this year’s TEDxUCSB demonstrated the fruits of those risks. They and those who attended their talks demonstrated the raw power and potential of ideas among the UCSB community.