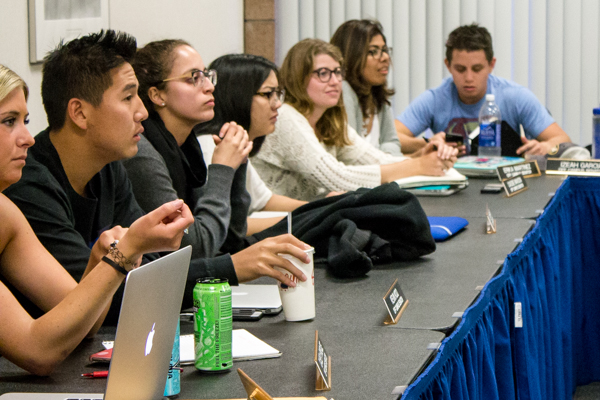 Associated Students Senate met last night in the UCen’s Flying “A” Room to discuss Deltopia crime statistics, A.S. Food Bank funding and events to commemorate the anniversary of the May 23rd tragedy.

During yesterday’s meeting Senators passed a “Bill to Re-Envision the Role of the Internal Vice President” and sent “A Resolution to Support the Mental Health Services Act,” “A Bill to Update Policy 37 Media and Publicity,” “A Bill to Define the Special Elections Process for Spring 2015,” “A Resolution in Support of A.S. Food Bank as a Food Center” and “A Bill to Update the Eligibility of EOP Grants” for review by the University Affairs Committee.  The senators also introduced several administrative bills and resolutions regarding A.S. Legal Code, sending them to committee for review.

UCPD Lt. Mark Signa updated the senators on Deltopia crime statistics and said there were 206 citations issued and 145 arrests made during the festivities. Thirty-five of those arrested were UCSB students, 15 were SBCC students and 95 were unaffiliated with either school.

According to Signa, although the number of arrests was “moderately high,” a reduction in medical emergencies and violence proved to be a positive change from last year’s Deltopia. Signa said the success of this year’s Deltopia occurred due to the concerted effort of students and community members to host alternative events and keep it local.

“The only thing I contribute success to is actually not law enforcement, but student efforts and the community and people coming together to make this a successful event,” Signa said.

Signa also said UCPD aims to reduce the number of officers deployed during Deltopia in the future, but that any reduction would be based on circumstances.

“I think that’s the general goal of all of this: to reduce the number of officers,” Signa said. “This year we had about 220 officers throughout the day … I think that’s definitely something we can look into reducing.”

Zach Goulhiane, UCen Governance Board member, Senator and third-year chemistry and political science double major, told the Senate that Kaplan Inc.’s lease on their space in the UCen is ending soon and UCen administrators are weighing their options for how to use the space.

“Their contract ends in October 2016 so they’re trying to decide whether to use that space as still Kaplan or have someone else rent that spot,” Goulhiane said.

A.S. Food Bank Student Chair Katie Freeze, Vice Chair Erick Lankey and Coordinator Tuyen Nguyen  gave a presentation to the Senate to encourage the Senate to pass “A Resolution in Support of the AS Food Bank as a Food Center,” which seeks funding to expand the Food Bank’s services.

“The idea we came up with is expansion of educational programs, such as conference outreach,” Freeze said. “And ideally we want a community food center and a demonstrations kitchen where students can go if they don’t have access to a kitchen.”

According to Lankey, the campus’ grant of $75,000 for the A.S. Food Bank from UC Global Food Initiative and UC Office of the President (UCOP) ends in 2016, and the organization’s fee initiative ends in 2017. Thus, to continue servicing the volume of students that use the Food Bank, the organization will need additional funding, Lankey said.

Lankey said the food bank currently services about 2,500 students and is projected to serve 3,000 students by the end of the year.

According to Freeze, receiving additional funding will help the food bank improve their services and thus work toward their goal to reduce the number of food bank-reliant students.

“We’ll be able to provide higher quality food for our students in the long run,” Freeze said. “More culturally-appropriate food at our bank as well.”

Freeze also said the A.S. Food Bank is collaborating with other campus organizations for the Edible Campus Project, an endeavor started by alumnus and musician Jack Johnson and his wife Kim that aims to eliminate local food insecurity, co-led by the Food Bank, the A.S. Department of Public Worms and UCSB Sustainability.

“Another thing we’re looking to do is to increase food production,” Freeze said. “We are in partnership with the Department of Worms and UC Sustainability to start on-campus gardens.”

“Many efforts are underway at UCSB and Isla Vista to commemorate the anniversary and give the community the spaces in which to come together in healing,” Puente said.

Events will include a candle light vigil, a march to Del Playa, a paddle out held by the Surf Club, the opening of Isla Vista’s Love and Remembrance Garden and the lighting project, amongst others.