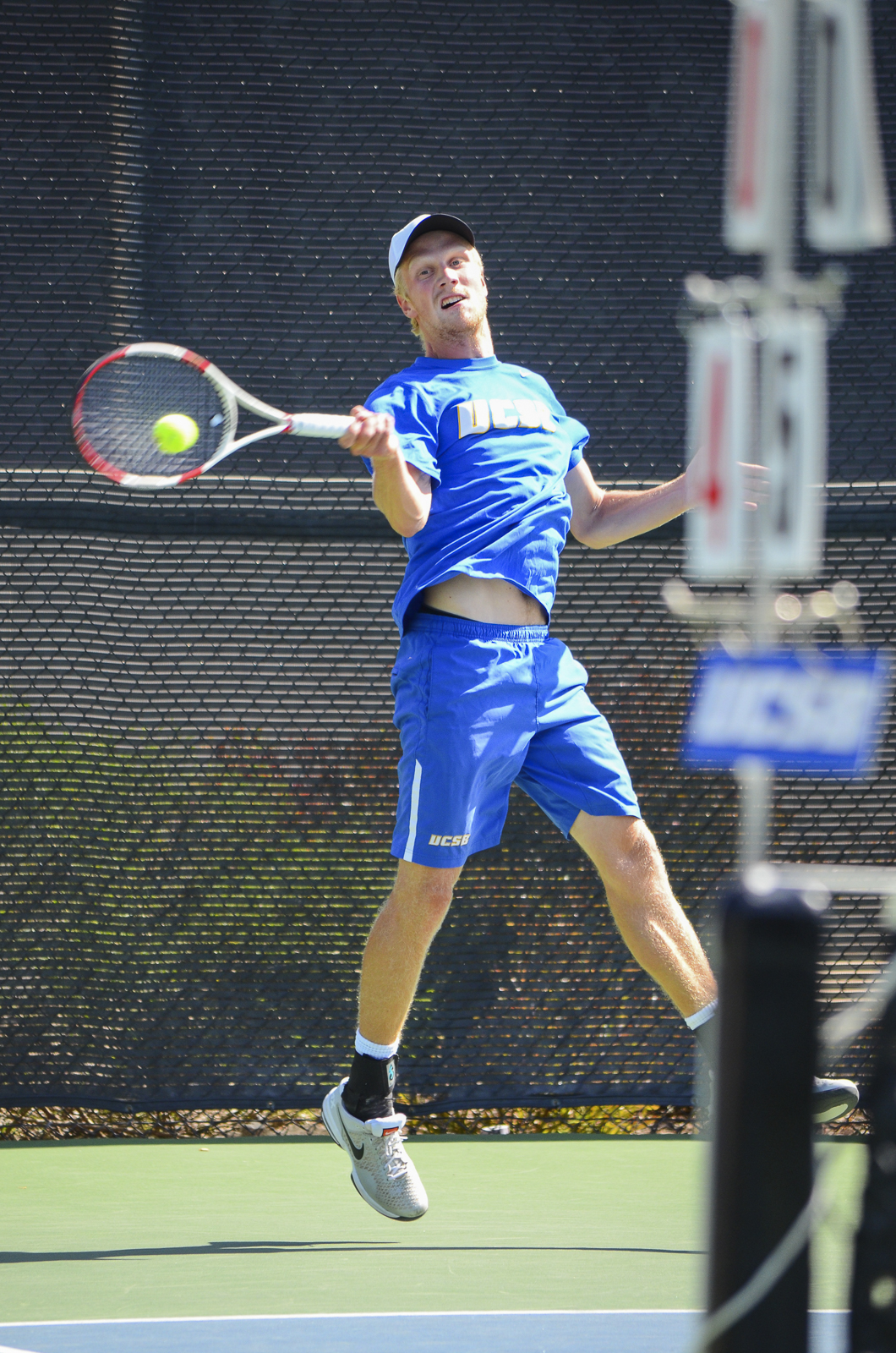 Erik Johnsson jumps to return the ball to his opponent. Christina DeMarzo/Daily Nexus

The No. 62 UCSB men’s tennis team looks to advance in the playoffs today when it competes in the Big West Conference Tournament held in Indian Wells. As the third seed in the competition, the Gauchos will first take on Hawaii in the quarterfinal round.

The Gauchos finished off their season last weekend collecting a 12-9 overall record and a 3-2 record in conference.

Santa Barbara is heading into this tournament with some momentum from the second half of the season, having won nine of its last 12 matches. The last of these regular season battles came last Saturday, where the team nearly swept then-No. 50 Cal Poly 6-1 to earn the Blue-Green rivalry victory.

This win also put UCSB at a 9-0 home record, making it the first team in school history to achieve an undefeated home standing.

“I can tell you that we will be one of the fittest teams down there and that will go far for us,” Head Coach Marty Davis said. “It’s our tradition to prepare that way and we’ve won a few titles because of it. Our guys really bought into this year, and I think it will help separate us.”

The fitness of every player on every team will be tested at the Indian Wells Tennis Garden located in Palm Springs. The massive facility, although enjoyed by many players, features all outdoor courts in the desert’s 110-plus-degree weather.

The path to the championship is already laid out for the Gauchos, who will first take on Hawaii. Beating the Rainbow Warriors would put the Gauchos in a match with second-seeded UC Davis, and a win there would drop them off in the final round, likely with the number-one seeded UC Irvine or the four seeded Cal Poly.

When the Gauchos faced Hawaii earlier this season, it was a very one-sided event. The Gauchos took the victory by a score of 6-1 over the visiting Rainbow Warriors, sweeping the doubles point and taking five of six in the singles game. All of the singles victors won in straight sets as well, including freshman Cody Rakela’s impressive 6-1, 6-1, performance.

If the Gauchos advance today, a rematch with UC Davis awaits them in the semifinals. Davis is just what the Gauchos have in mind coming into this event, despite losing the regular season match 4-3. UCSB was the visitor in this matchup and nearly ruined the perfect home season for the Aggies. The action was tied at 3-3 and the Aggies managed to save triple match point to give them the slight advantage over the Gauchos.

A win in the tournament would give UCSB its ninth conference championship and an automatic bid into the NCAA Tournament where the team would make its 11th appearance.

“We’re going to carry the momentum from this great season with us to the tournament,” senior captain Ziad Sultan explained. “We’re hot right now and [when] we go down there, we’re bringing the fire.”

The team’s first match starts today at 9 a.m. With a win, the Gauchos will play UC Davis at 3 p.m. Friday. The final round is set to start Sunday morning at 9 a.m.

A version of this article appeared on page 10 of April 23, 2015’s print edition of the Daily Nexus.