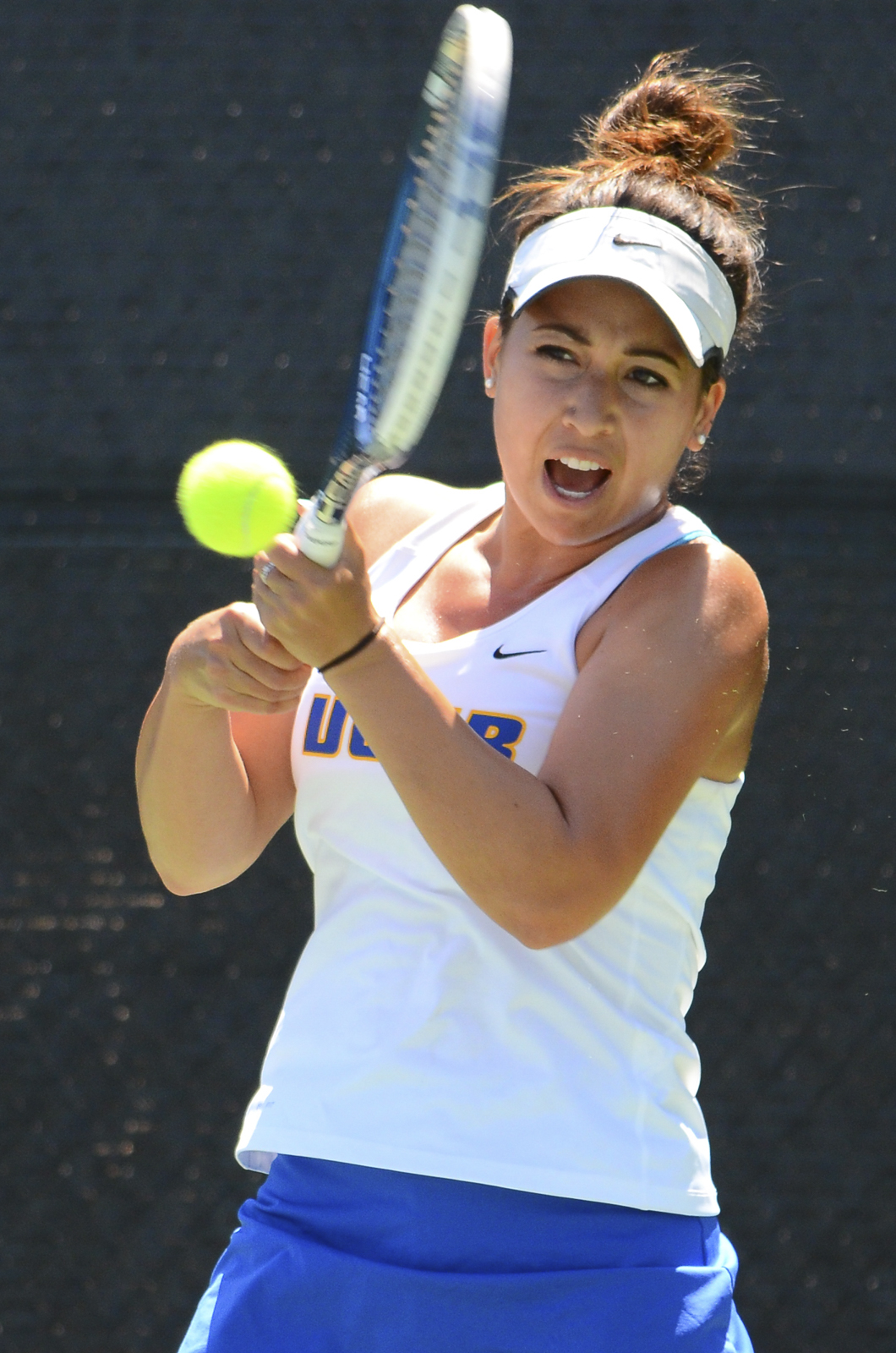 Stacy Yam hits the ball back towards her opponent. Christina DeMarzo/Daily Nexus

The No. 63 UCSB women’s tennis team will take on UC Davis in the first round of the Big West Tournament this Friday morning at Indian Wells, California.

The Gauchos are coming off of a two-game win streak against conference opponents UC Riverside and Cal Poly, helping earn themselves the No. 3 seed in the tournament. Santa Barbara defeated the Aggies earlier on in the season 4-3 in Davis.

UC Davis has come into the postseason winning eight of its last 11 matches, entering the tournament as the No. 6 seed.
Santa Barbara will need to look out for the Aggies’ sophomore Frederique Sleiffer, who has won 16 matches during singles play.

For the Gauchos, freshman Natalie Da Silveira has been in red-hot form this season, winning 10 out of 15 matches at the No. 2 spot.
Davis’ doubles partners sophomore Kamila Kecki and Sleiffer have won 15 matches together, the most on the team.  They have also come away with eight wins out of their last 10 matches, ending the season strong.

“The last two matches were good to get some confidence back,” Head Coach Simon Thibodeau said.  “The girls are confident versus the Aggies. We beat Davis at their place without playing our best tennis.”
Overall, the Gauchos have collected 26 wins in doubles play to their 27 losses.  The doubles point itself has proven even more elusive, with UCSB picking it up only eight out of 22 possible times.

UC Davis has won the doubles point in 16 of its last 22 matches. The Aggies have won every single one of their matches after getting out to a 1-0 lead, with the exception of a loss to Cal State Fullerton. The Aggies suffered only two home defeats in the last half of their season, falling to No. 68 Hawaii and No. 63 UCSB.

A late find in the season, the duo of partners senior Stacy Yam and sophomore Jaimee Gilbertson have gone 9-2 while playing together. They will be crucial in helping secure the doubles point for UCSB, along with partners freshman Lou Adler and Da Silveira on the No. 2 court. Sophomore duo Melissa Baker and Luisa Ortiz Candido have been moved up to the No. 1 court near the end of the season and will also be instrumental in getting the doubles point for the Gauchos.

Adler has recently returned from injury, coming back to help Santa Barbara sweep both UC Riverside and Cal Poly.  She was out for eight weeks with a stress fracture on her right foot, returning just in time to participate in the Big West Tournament.

“We know [that] they will be extremely motivated. So are we,” Thibodeau said. “It’s a team that is feisty and makes a lot of [effort]. “Everyone is 0-0, and we will give everything we’ve got one match at a time.”

UCSB will play UC Davis at Indian Wells, California at 8 a.m. on Friday.

A version of this article appeared on page 10 of April 23, 2015’s print edition of the Daily Nexus.