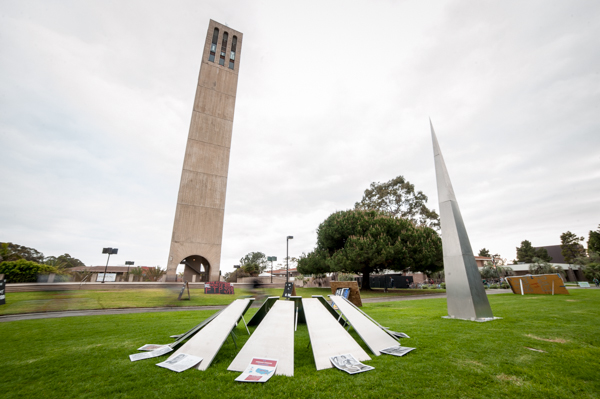 The Armenian Student Association (ASA) will hold a Candlelight Vigil Thursday night in Storke Plaza as a final event for their Armenian Genocide Centennial Commemoration Week.

ASA held a weeklong event beginning this past Monday to educate students and the campus community about the deaths of an estimated 1.5 million Armenians beginning April 24, 1915, as well as the struggle for the Armenian community to receive United Nations recognition of the genocide years after the massacres occurred. During the Candlelight Vigil at Storke Plaza there will be a moment of silence to commemorate the 100th anniversary of the Armenian Genocide.

I believe the fact that Obama is not accepting the Armenian genocide for what it was, which is a genocide, is honestly political cowardice. – Vice President of the Armenian Student Association Alexander Atamian

Vice President of the Armenian Student Association and third-year biology major Alexander Atamian described the event as a week of remembrance for the genocide, which he said occurred under the rule of the Ottoman Empire for eight years during the start of World War I.

“Every year we have an Armenian Genocide commemoration week and it’s in order to remember the 1.5 million Armenians that were massacred in 1915 to 1923 by the Ottoman regime at the time,” Atamian said.

Atamian said U.S. Senators oftentimes only say they will acknowledge the 1915 massacres as a genocide in order to gain political support from the Armenian community, and then often do not completely follow through.

“At this point I believe it’s just a political and strategic tactic that senators are using in order to get all of the Armenian votes because they know how strongly Armenians feel about the situation,” Atamian said. “I believe the fact that Obama is not accepting the Armenian genocide for what it was, which is a genocide, is honestly political cowardice.”

According to Atamian, in order to prevent future genocides it is necessary for the global community to recognize all past genocides that have occurred, particularly the Armenian Genocide.

“There are other genocides in the world that are happening every day and we need to step up morally and defend those who are being massacred,” Atamian said. “In order for there to not be future genocides we need to acknowledge and accept the ones that have occurred — the first one of the 20th century being the Armenian Genocide.”

Atamian said ASA integrated other ethnic groups in their commemoration this year in acknowledgement that other groups were also massacred during the time of the Armenian Genocide.

“This year we did something different where we had a Assyrian individual approach us and asked us if we would also share their story as well in our commemoration, which we did … because during that time others were annihilated,” Atamian said.

The consensus of historians who study genocide say that what happened … in 1915, where a million-and-a-half people probably died, fits anybody’s definition of genocide. – Professor Paul Spickard

“[What] we started to do last year was put up the silver memorial along with the 12 slabs … it’s basically a miniature of the Armenian Genocide memorial that is in Yerevan, which is the capital of Armenia … the 12 slabs representing the 12 provinces that belonged to historical Armenia,” Atamian said.

Paul Spickard, a professor who focuses on 20th-century U.S. social and cultural history, said although some historians disagree, most historians have come to a consensus that admits the Armenian Genocide fits the definition of a “genocide.”

Spickard also said the Armenian Genocide fits the United Nations’ definition of genocide because it was a direct attempt to annihilate the Armenian population.

“It was clearly ethnically directed and that’s one of the criteria for genocide,” Spickard said. “When the United Nations was founded they came up with a definition for genocide as an attack or attempt to destroy an entire ethnic group and it clearly was that.”

According to Spickard, because the U.S. is an ally to Turkey and Turkey refuses to admit its past aggressions, the U.S. is in a difficult political situation in regard to identifying the 1915 massacre as a genocide.

“Turkey is part of NATO, Turkey is one of the major players in Middle-Eastern politics and … of those players they are the only one with a democracy. So they are an ally,” Spickard said. “The United States really needs Turkey to be a strong counterbalance to Iran … [and] Turkey doesn’t want to face their reality.”

Fourth-year cultural anthropology major and member of cultural sorority Alpha Gamma Alpha Vicki Deirboghossian said many people outside of the Armenian community participated in the event “Handprint Against Genocide” on this past Tuesday to show their support for students advocated for Armenian genocide recognition.

“At Handprints Against Genocide … from what I observed a lot of people that weren’t Armenian or weren’t associated [with ASA] actually did participate,” Deirboghossian said.

Deirboghossian said it is rewarding to see others at the university care about the Armenian Genocide.

“It’s cool to see, being at a primarily white multicultural university and finding that people actually do care, it’s very rewarding,” Deirboghossian said.

Fourth-year English major Katrine Lalaian said it is important for students to be aware of the Armenian Genocide because after a century many people do not know it even occurred.

“It’s a really important thing … since it’s our centennial and a lot of people don’t even know what it is,” Lalaian said.