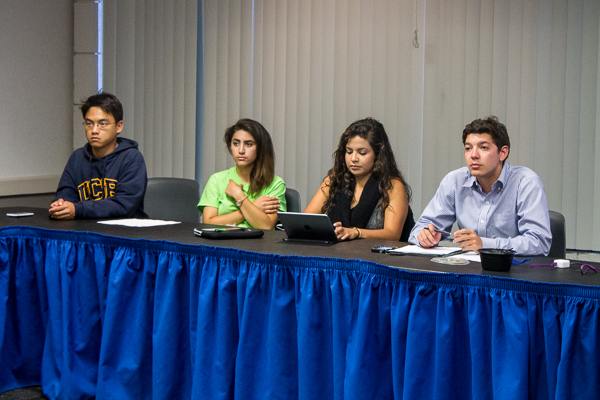 The Associated Students Finance and Business Committee met Monday afternoon in the State Street Room of the University Center to hear funding requests from six student organizations, but funded only one organization due to dwindling Senate Allocated Funds.

While the committee still has $3,000 in Senate Allocated Funds and $1,400 for Culture and Graduation Related Funding, the Office of Student Life line item is out of funds. For this reason, the committee motioned to pass $0 for seven of the eight requests made by student organizations.

The UCSB League of Legends club requested funding for food for an upcoming event and the Women’s Club Water Polo captain, third-year Heather Borek-Klempfner, asked the committee to provide funds to help the team travel to Vermont, California for the Pacific Coast Division Championships.

Money was also requested for the Black Pioneers’ Renaissance Organization’s annual Black Women’s Appreciation community outreach program on May 14 and to fund a Films for Funds project to show movies for $1 on Sundays at Isla Vista Theater to raise money for non-profits.

Because of the lack of funding for Office of Student Life line item, the committee was unable to approve funding for any of these six student requests.

Hermanos Unidos member Juan Carlos Gomez requested to reallocate funds granted previously by the committee to reserve the Hub for a dance during the fraternity’s College Link Outreach Program to reserve the Music Bowl, instead. The event usually attracts 120 high school students from the Los Angeles Unified School District.

A.S. University Affairs also requested approval for the reallocation of $10 from honoraria funding into special projects. The committee approved both requests.

Tri Delta Philanthropy Chair Cyrena Gonzalez requested funds for the sorority’s iHop charity “all you can eat” pancake event to take place on May 8 from 6 to 9 p.m to benefit St. Jude Children’s Research Hospital.

“We have been partners with them since 1989 and we have raised about $40 million for them as a national sorority,” Gonzales said. “This will be our sorority’s first year doing it and I can tell it’s going to be very successful.”

Kappa Alpha Theta Philanthropy Chair Carly Stewart requested funding for the sorority’s annual kickball tournament on May 16 to raise money for the Court Appointed Special Advocates (CASA) program, a national organization that trains individuals to represent children in court who don’t have access to lawyers.

The committee also passed the motion to fund $2,598 of the requested $5,195.50 by the Vietnamese Students Association to fund its culture week beginning May 11, which includes an educational workshop, Vietnamese food tastings and a fashion show.

Fraternity Delta Sigma Pi also received funding for a $250 start-up and the Community Financial Fund was granted $320 in senate allocated funds for honoraria.